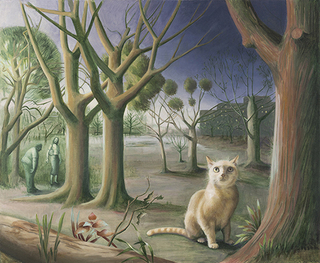 Fulvia Zambon, "Muffin Lost Her Home," 2018. Oil on linen, 36” x 44.” Courtesy Figureworks.
Readers of this column with the stamina to read all the way through my reviews of Sideshow’s annual “Nation” shows may know I have long admired the academically flawless but highly imaginative paintings of Fulvia Zambon. At last, she has a fascinating show of her own at Figureworks in Williamsburg, “Fulvia Zambon: My Encounter with Momoi,” but you must rush to see it, as it closes this Sunday, June 3 and the gallery is only open Saturday and Sunday, 1 to 6.

Over the Memorial Day weekend, I attended a talk given by Fulvia Zambon herself at Figureworks, to introduce herself and her show.

A fine-boned lady with an exuberant Italian accent, she began by quoting a famous artist to the effect that one’s art must and always will be an expression of oneself before it is or can become anything else
.
More specifically, she continued, she has always been a figurative artist, but one drawn to express internal fantasy -- although she has exposed herself to many other kinds of art and learned from them all.

Born in 1953, she was raised near Turin, so far north in Italy that it lies near the foothills of the Alps and is almost equally close to France and Switzerland.

In this fashion, she progressed from Michelangelo & Piero della Francesca to the “Arte Informale” of the 1950s and the “Arte Povera” of the later 1960s and 1970s.

The latter was a more Dadaistic outgrowth of the former, which in turn had been an experimental school related to the abstract school of “l’art informel” in France -- but focusing more on materials than on abstraction for its own sake.

From such sources, Zambon learned to develop a keener sense of her materials, and no doubt a greater freedom in composition, but she has remained faithful to representation and to oils (the current show is all oils on linen).

Moreover, since settling in Brooklyn in 2001, she has perfected her technique with further study at the Art Students League.

In particular, she has studied portraiture under the tutelage of Ronald Sherr, a very successful academic portraitist who has depicted numerous public figures, from General Colin Powell, both Bush presidents and assorted other governmental dignitaries to society ladies and their children.

Indeed, Zambon has contributed portraits (of friends or models) to the last two Sideshow extravaganzas, and even the current show at Figureworks has one (though again, only of a friend, not a celebrity).

Far more significantly, its other eight images focus on the artist’s more private passions, among which women, children, baby carriages and cats play the foremost part.

Various parts of these paintings may be based on sketches, live models or photographs, but more importantly, these parts are put together in compositions derived from the artist’s imagination.

The cats in particular are based in Zambon’s personal experience, beginning when she was a small child and had a tabby kitten, Momoi, named after a character in a children’s story.

She used to love him dearly and play with him often, even dressing him up in doll’s clothes. He bore it all patiently, but one day he disappeared. Little Fulvia was devastated.

Her elders told her that he had run away, but years later she learned by accident that he had been stolen and abandoned somewhere by a mentally deranged person.
This was a horrible, lasting shock for her.

The current show could even be seen in some ways to be an effort to exorcise its memory. Certainly, the show is dedicated to Momoi.

Still, only two of the paintings in it feature Momoi in them—a large one entitled “My Encounter with Momoi” (2018) and a smaller one which is a study for the large one.

The large one shows a furry little cat perched on the bough of a tree with a very small child – almost a baby – in a baby carriage, gazing adoringly up at him.

The smaller study (also 2018) shows the same child surrounded by about a half-dozen little cats – apparently because the artist was experimenting with different possible poses before settling on the one finally used in the finished painting.

There are, however, two other paintings in the show also featuring cats.

One is “Friends with Green Eyes” (2017), which shows a young woman holding a large and placid tabby cat in her arms.

Although a model posed in the artist’s studio for the figure of the young woman, in the painting she and her cat are standing in an imaginary outdoor setting, with a delicate wire fence behind them, embellished with a lattice-like decoration of leaves, vines and flowers.

Finally, we have “Muffin Lost Her Home” (2018) which is reproduced with this review. It shows a roly-poly little cat with enormous big round eyes, seemingly lost in a forest of curiously semi-bare trees with two odd people in the distance.

Although the subject matter in all three paintings is clearly indicated, the degree of verisimilitude is strikingly varied.

“Friends with Green Eyes” is so faithful to nature that it could even qualify for inclusion in a hyperrealist exhibition.

“My Encounter with Momoi” is a little freer in its brushwork – one might almost say more abstract.

“Muffin Lost Her Home” presents us with an animal whose big staring eyes and subtly bizarre landscape setting makes it looks almost like an illumination from a medieval manuscript or an illustration for a tale of science fiction.

Although this painting is definitely figurative it is also far from everybody else’s world.

Even the title is made up. Although Zambon still has a sizeable group of pet felines, they all have polysyllabic and very Italianate names.

The artist doesn’t know any cats actually named Muffin – she just thought the name fit the image. And so it does.

Dear Piri,
Thank you so much for all your keen work!