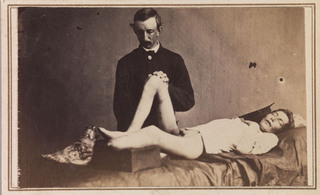 Reed Brockway Bontecou (American, 1824-1907). Union Private John Parmenter, Company G, Sixty-Seventh Pennsylvania Volunteers. June 21, 1865. Albumen silver print from glass negative. Carte-de-visite. Collection Stanley B. Burns, M. D. Image (c) The Metropolitan Museum of Art, New York
The second show this summer at the Metropolitan Museum of Art devoted to the War Between the States is called “Photography and the American Civil War.” It includes more than 200 photographs, and was organized by the Met’s Jeff L. Rosenheim (also through September 2 at the Met; thereafter at the Gibbes Museum of Art, Charleston SC, from September 27 through January 5, 2014, and the New Orleans Museum of Art, January 31 through May 4). Having been so moved by the few photographs that I’d seen in the paintings show about the Civil War, I went in to this show with great expectations.

Although I wasn’t disappointed, I was also very much surprised, as this exhibition wasn’t anything like what I expected it to be. In my elderly innocence, I was looking forward to many more photographs like those in the paintings show, flat medium-sized images hung in rows around the galleries, but lo and behold! Instead, the show has been gussied up with the novel kind of installation that is nowadays is so often considered essential for museum-goers lacking the experience & therefore the stamina to look at rows and rows of images.

The larger photographs – all silver albumen prints made from glass negatives-- are displayed mostly on the walls of the galleries, in the classic form that I expected the whole show to be -- but sometimes they also appear in open bound volumes located in vitrines. Dozens of smaller pictures are mounted in the small memorial casings in which family portraits were treasured in the 19th century-- and again, clustered in more vitrines. Further individual pictures, often but not always portraits, are mounted on what look like oversized toothpicks, and again clustered in vitrines.

These small pictures are of three different types: silver albumen prints known as “cartes de visite,” ambrotypes or tintypes. An additional number are “stereographs,” which is to say double sets of silver albumen prints that were displayed in stereoscopes, those intriguing 19th century devices for enabling the viewer to achieve a simulation of three-dimensional vision.

The camera of Matthew B. Brady, together with its tripod, is on view, as are the ancestors of today’s campaign buttons, with tintype photographs of the candidates (sometimes set above rosettes & ribbons, like the ribbons awarded at horse shows). On the walls are also posters relating to slavery, the war, & Lincoln’s assassination. In another vitrine, there is even a Civil War drum. Actually, this kind of installation is not only novel but necessary, not least because so many of the photographs look – at first glance, anyway-- so much alike. This is especially true of the many little portraits in their casings, and of the separate cartes de visite.

At ten cents to two dollars per image, these small photographs were accessible even to people of modest means, and the families of soldiers going to fight in a war with a 20 percent mortality rate wanted something to remember their loved ones by, just as the soldiers themselves wanted to be able to feel a little closer to their families. In their very amplitude, these many little portraits are curiously moving, portraying such a wide cross-section of humanity caught up in a common ordeal. In sum, I think this type of installation worked admirably to enhance not only the meaningfulness but also the quality of the exhibition.

This happens to be a show where I read the labels with interest. Not a lot of artificially-invoked “sentiment” here, just the brutal truths of war. In the gallery with pictures of the battles of Antietam and Gettysburg, one carte de visite showed three small children. It had been found in the hand of a dead Union soldier after Gettysburg. As there was no other identification on the body, the picture had to be published. In this way, Philinda Humiston learned what had become of her husband Amos Humiston. In the gallery dealing with later war portraits and views, there’s a carte de visite portraying Alfred A. Stratton, an armless veteran who sold these cards to support his wife and child—and who died soon after, at the age of 29.

All ten galleries in the show have some pictures in them of interest, but three galleries spoke to me most. The first gallery, which summarizes the show in miniature, hooked me in immediately. Here is the young Abraham Lincoln, in a salted silver print made by William Marsh in May of 1860. This was before Lincoln had become President, and was still looking young. Here, too, is Jefferson Davis, later president of the Confederacy, in a carte de visite made before the war by the famous Brady. Also, a haunting carte de visite showing Sojourner Truth, the African-American abolitionist who supported herself by selling these cards, which bear the legend, “I Sell the Shadow to Support the Substance.” Also, the famous photograph of dead soldiers taken by Timothy H. O’Sullivan (1840-1882) and entitled “A Harvest of Death, Gettysburg.” Also, harrowing pictures of the scarred back of a runaway Mississippi slave, attributed to McPherson & Oliver, and an amputation at a field hospital, by an unknown artist. To round off the introduction are pictures of Southern ruins by George N. Barnard (1819-1902) and Alexander Gardner (1821-1882), plus a startlingly lifelike stereoscopic view by Thomas C. Roche of dead Confederate soldiers inside a rebel fort known as “Fort Damnation.”

In its laid-back way, this show is also into debunking myths—in particular, the myth that Brady was the great photographer of the Civil War. Turns out that in the 19th century, photographic studios were team efforts not unlike medieval workshops, where the art that went out under the name of the master might in fact have been done partially or entirely by journeymen and apprentices. Brady, like other master photographers of his day, was more of an impresario than a work horse. He displayed photographs of the war—most notably in his Manhattan studio—and published them under his own name, but the pictures that he exhibited and published of battlefields, fallen soldiers, and the devastation that war left, were almost all taken by teams of other photographers, hired and financed by him.

The real heroes of Civil War photography were Gardner, Barnard, and (to a lesser extent, to judge from this show) O’Sullivan. Both Gardner (who had worked for Brady) and Barnard published large luxurious volumes of war photography under their own names in 1866, the year after the war---volumes which also gave credit to the other photographers whose work was reproduced. The fourth gallery at the Met--devoted to Gardner’s two-volume work, “Gardner’s Photographic Sketchbook of War”-- is the second gallery in the show that really talked to me (the later gallery, presenting Barnard’s “Photographic Views of Sherman’s Campaign,” didn’t speak quite so clearly).

Part of the charm (for me) of the galleries focusing on the books by Gardner and Barnard may be the fact that they are two of the galleries in the show with a more conventional presentation. Larger pictures are hung in straight lines around the walls; the only concessions to “edginess” are the omnipresent vitrines with copies of the book, plus canvas on the walls behind the pictures (to simulate army tents, or onsite facilities for developing photographs???). But even so, the big attraction here is the sheer, almost classical beauty of so many of these photographs.

They portray what have already—by this stage in the exhibition--become familiar scenes of preparations for battle and its terrible aftermath, but all are situated amidst such placid country scenery and are so marvelously silent & beautifully composed that they speak with renewed eloquence. In those far-off days, cameras still required several seconds to capture an image. This was too long to allow photographers to capture scenes of action in battle – but in a strange way, this becomes almost a virtue, for the bizarre images captured here have all the beauty of landscapes as tranquil as a Claude.

The unique hell of the Civil War was that modern weapons had arrived in the world, but not modern medicine. In the days before antibiotics, infection was a constant threat and gangrene forced the amputation of many toes & fingers, feet & hands, even arms & legs. The ninth or next-to-last gallery of the show at the Met is a real shocker, but in its way as unforgettable as the best of the many memorable photographs I had already seen—my third “discovery” in this show.

Entitled “Photography and Medicine,” this gallery offers in large measure portraits of wounded soldiers made by Reed Brockway Bontecou, an army doctor at Harewood General Hospital in Washington DC, and compiled by him into a harrowing medical teaching album. Particularly—but alas, not atypically—harrowing is the photograph of a pathetically underfed Union Private John Parmenter, lying still under anesthesia but with his freshly amputated left foot standing on his pallet.

Ten of these images were loaned to the show by Stanley B. Burns, M. D. Another five have been given to the Met by Dr. Burns and The Burns Archives. I don’t know what else may be found in the Burns Archives, but their creator has rendered a service to humanity in preserving these historical documents. They aren’t as memorable as pictures as the best of the work by professional photographers like Barnard or Gardner. But they are more than good enough to make a deep impression – on me, at any rate. As a rule, I avoid novels & movies & TV shows about war whenever I can—but pictures like these can only tell me why.