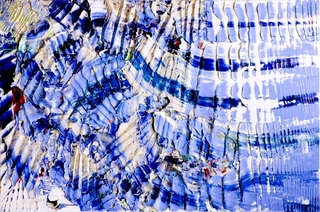 Roy Lerner. Lady Luck. 2010. Acrylic on canvas, 40 x 60 inches. Photo courtesy the artist.
Two fine shows of modernist abstraction are “Color Field Revised” at Loretta Howard (through July 25) and “Roy Lerner: ‘Passport’” at Bego Ezair (through June 30). The first is for those favoring the tried and true; the second, for more adventurous souls wanting to know what’s happening today.

The Loretta Howard show can be seen as a sequel to the “Color Field” show at the Deutsche Guggenheim last winter, which Howard herself saw and was influenced by. What seems to have appealed to her was its effort to open up the term “color field” to include artists not presently associated with the term, i.e. not presently associated with Clement Greenberg. Still, when all is said and done, her expansion might well have been approved by that crusty old gent himself – at least, to the extent that his famous 1964 Los Angeles County Museum exhibition of “Post-Painterly Abstraction” also included many artists not normally associated with him, either. It comes as something of a relief to find his catalogue essay from that show posted at the receptionist’s desk (a relief because one person whom I ran into at the Lerner exhibition’s reception was telling me about a critic who’d called him, and confided that he was trying to “save” Kenneth Noland from “the dead hand of Clement Greenberg”).

To be sure, no exhibition lacking canvases by Morris Louis and Helen Frankenthaler can hope to be a definitive revision of the term “color field” (at least, as the term is most widely understood today, though Irving Sandler, back in the 70s,. tried to appropriate it and apply it instead to the first-generation abstract expressionists Rothko, Newman and Still). Then again, who expects a gallery show to be definitive? All we really ask of a dealer is to put some handsome art on view, and that Loretta Howard has assuredly done. Not surprisingly, Noland, Larry Poons, Jules Olitski and Friedel Dzubas are all here, and the most spectacular part of the show is the large back entrance-level gallery, where are hung four huge & top quality canvases by these masters, one on each wall. The Poons will probably draw the most ahs of delight, being an untitled 1983 painting rich in the narrow, downward coursing rivulets of luminous gray, but the Olitski is also a splendid example of his spray-painting period, and the Noland, of his later and more subdued stripe paintings. My favorite is the mighty Dzubas, “Antigua” (1971), at the cusp between his generic color-field paintings of the 60s and his mature style of the 70s, with large, cloud-like, melodic areas of pale color. At the entrance to the show is a beautiful minimal-type painting, “Marriage #3,” by Darby Bannard, who was represented in “Post-Painterly Abstraction,” and was already a friend of Greenberg’s. Hidden away in an upstairs alcove is also a tall, slender & extremely nice picture by Jack Bush, another favorite of Greenberg’s who was also included in that landmark 1964 show.

Beyond that, I saw reasonably good paintings by artists who were also included in “Post-Painterly Abstraction,” but never made it to Greenberg’s inner circle. Here I mean Gene Davis, Frank Stella, Thomas Downing and Ray Parker. There is presentable work by artists whom Greenberg would come to admire, but who were too young in 1964 to merit inclusion in the Los Angeles show: Dan Christensen, Larry Zox, maybe even Cleve Gray. Motherwell is represented by a spirited little collage built around a pack of Gauloises, though what it’s doing here I cannot imagine. To say this is “color field“ art is to twist the meaning of that term into a meaningless pretzel. The same applies to the piece of hanging curtain by Sam Gilliam (which is not to say that some of Gilliam's work doesn't fit the definition, just not this piece). Baziotes is seen to good advantage with an attractive smallish watercolor, though again it has little do with color field. The weakest part of the show are the lesser geometric abstractionists: they, I suppose, may be coming into favor with collectors who don’t want to pay top dollar for Noland or Frankenthaler—artists like Lorser Feitelson, Karl Benjamin and Leon Polk Smith. Still, “Post-Painterly Abstraction” also included a number of painters who didn’t really go on to fame and fortune, either. Among them were David Simpson, Albert Stadler, and Mason Wells.

The Bego Ezair explanation for this show’s title is that the paintings in it can take you “wherever you want to go.” My association is with traveling from one country to another, particularly since Roy Lerner has achieved considerable success with exhibitions in Canada and Italy since his last appearance in New York (at Cooper Classics, in 2002). Not always have I been able to review Lerner’s shows in NYC as I would have liked. Back in 1997, when he had an exhibition at the Gershwin Gallery on East 27th Street, I was publishing a few reviews in a magazine called Night, which otherwise focused largely on photographs of bizarre Warhol-types in gaudy getups, photos often if not always taken by the publisher of the magazine. Lerner, it seems, had made friends with this publisher before I saw the show, and the show was of mixed quality, so I said so in my review. “But Roy Lerner is my friend!" exclaimed the publisher, when he read the review --- and refused to publish it. As A. J. Liebling famously observed, “Freedom of the press is limited to those who own one.” Still, some publishers are more open-minded than others, and so you may also read a review of the present show at artcritical.com in which I was allowed to observe that this show, too, is a bit uneven. Experiments with black or bare areas of canvas don’t always come off, and one (with a lot of yellow drips) can be characterized as an eyesore. But hey! Who among us is perfect? I myself am capable neither of hagiography nor travelogues, so my reviews try to tell it as other, unpublished commentators with good eyes have seen it, or will see it. I say that this show, despite its boners, is well worth struggling on up to the Upper East Side.

Lerner’s list of Greenbergian associates is impressive. In his salad days, Greenberg himself consented to critique his work. During these early days, he also put in a tour of duty working for Anthony Caro, and he learned about gel – and a lot of other aspects of painting -- from Peter Bradley, with whom he studied at progressive Franconia College in New Hampshire. Though Lerner’s technique is descended from Pollock, he has moved on from the color field painting of the late 50s and the 60s, on even from the way that Olitski and Poons practiced what is more accurately called modernism in the 70s and 80s. Like so many other painters (Greenbergian and non-Greenbergian), he makes plentiful use of the myriad pigments, gels and other painters’ supplies from Golden Artist Colors, and has worked with them on occasion to develop new materials. He exhibited many times with Kenworth Moffett’s “New New Painting,” though of late he has appeared to take a separate path. This is what evolution is all about.

Karen Wilkin has characterized Lerner’s many-splendored, multi-colored, swirling and vigorously impastoed surfaces as “modernist baroque.” Though I can see what she means, I’m not totally happy with the term because to me “baroque” suggests theatricality and contrasts of light and dark (neither of which really apply to Lerner). If one has to describe his art in terms of art history, I’d suggest that “abstract Renoir” may be nearer the mark, though not in the sense that Lerner’s approach bears the slightest resemblance to the impressionist brush stroke, or is at all representational. What I really mean is that his colors – and the general impression conveyed by his canvases – are as luscious, voluptuous and sensuous as any nubile Renoir nude. The paintings that succeed best in the current show are mostly those that limit their palette. “Intertwine” (2011), a true gem, mostly sticks to pale blue, with complimentary touches of pale green and yellow. “Splash Dance” (2006) is dominated by its field of fiery turquoise. The most striking example would be “Lady Luck” (2010), where the entire canvas of frenetically roiling shapes is dominated by white and two shades of blue, with just a very few magenta accents. Still, one painting with an exhaustive range of color – and bare spaces into the bargain --- is the huge, horizontal “Pathway to the Shoals” (2011). Across the top and bottom are horizontal bands that rely heavily on red and blue for their effect, highlighted by iridescent greens and golds. Across the middle is one of those still- experimental bands of blank canvas, or canvas covered only by transparent paint or gel. I wouldn’t say this is a great painting, but it’s an extraordinarily interesting one. Maybe in time, it will come to seem great.