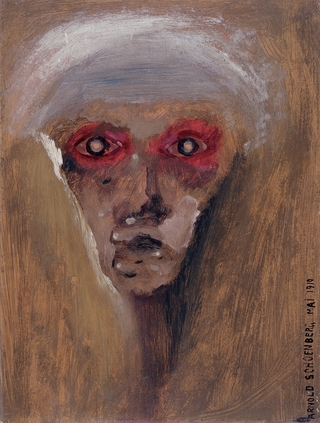 Summertime is group show time. Two galleries, Spanierman and Allegra LaViola, are indulging that impulse with abstract shows, while the Neue Galerie is employing it to examine early 20th century Austrian modernism.

Allegra LaViola is on the lower East Side (not far from the Educational Alliance, where Rothko exhibited, in his salad days, and where the late lamented Elyssa Rundle had a show a decade or so ago). According to the New York Times, this part of town is now (or rather still) where daring newcomers exhibit, but the show at LaViola is sedate enough to fit right into Chelsea. Its name is “Draw the Line.” It’s on through August 6, is billed as “an exhibition of drawing, installation and painting that explores the theme of the line in art,” and is decidedly pleasant if somewhat innocuous. There are, of course, three regulation “installations,” or what I would call site-specific work, since they were painted directly on walls. None rang my chimes, especially not the one by Depoe that dribbles the three primaries on a white brick wall out the back door of the gallery. It reminded me of a show I saw last month, by a four-year-old child whose parents similarly seemed to think that painting like Jackson Pollock was so easy that even their tot could do it (such is the fad for novelty & identity politics that these pathetic efforts sold out).

On the other hand, “Draw the Line” also has some nice work in it. I liked the delicate gray-on-white, graphite drawings by Lauren Seiden, for openers, the attractive collages made of dancing strips of colored paper by Don Gummer, “Spin” by Marina Adams, a painting of brightly-colored semi-triangular shapes whirling around a vortex, and especially the three small tondos, 20 inches in diameter, with flowing bands of color painted across their centers by Sandi Slone. Admittedly, they’re not as ambitious as earlier work by Slone that I’ve seen, but autre temps, autre moeurs, and her colors are as clear and true as ever. The other artists in the show are Samuel T. Adams, Joey Archuleta, Greg Hopkins, Warren Isensee, Erik Jeor, Field Kallop, Margaret Lanzetta, Gary Petersen, Jennifer Riley, Chuck Webster, and Stephen Westfall.

Uptown, Spanierman has turned the “historical” side of its gallery into a stage for “Ten Modern and Contemporary Artists” (through July 16—a collagist is in Spanierman Modern). The focus in the group show is on artists older than the LaViola group, and/or artists practicing the gestural painting led by de Kooning in the 50s. Among them are Betty Parsons (better known as a dealer, but occasionally piquant as a painter), Charlotte Park, Stephen Pace, Neil Williams (shaped canvases in Day-Glo colors half-way between Zox and Stella), Carol Hunt, Katherine Parker, and Teo González. The three who stood out for me were Dan Christensen, Frank Bowling and Frank Wimberley. The first two, I am sure, are familiar to most of my readers, but they may not be aware that here is a chance to see five or six fine paintings by each.

The large “LS” (1967) by Christensen, displayed in the gallery’s window, is a magnificent example of the artist’s softly-hued spray paintings, built up of horizontal strokes of cream and gray, hints of brighter hues peeping through. Also handsome is “Wave” (1987), a small narrow horizontal, with white and red striations across it, and especially “Bill’s Drift” (1979). This was a type of painting by Christensen that I’d never seen before, with a yellow field dominated by a diagonally vertical stripe of Kelly green, and lesser accents of purple, pink, orange and blue. I also saw five paintings by Bowling – 2 from the 70s, one from 1980, 2 from last year. The two recent ones, “Old Altar Piece” and “Wreath,” were both welcome and familiar, but the two from the 70s were unexpected and gave me fresh jolts. “Flame” (1975) is blended vertical stripes of color, the broadest being mauve and the narrow one next to it, a surprising red, while “Sanovski” (1977) is a knockout, with an intricate rainbow of pale colors, blended like the feathers on a peacock’s tail.

Wimberley (b. 1926) is the least known of the three, and I was only able to see three paintings by him. One left me cold, but the other two were impressive. This artist works with a defiantly flat matte finish. His “Immixture” (2011) is yellow paint slathered on, in raised short, folded strokes over a black field. “Tide Murmur” (2011) is large horizontal rectangles and narrower stripes of grays and black with accents of white, mustard and a pale bluish gray. With Wimberley, as with Christensen and Bowling, there was one painting on the checklist I couldn’t see, because it was out on approval. I would be irritated except that I’m happy business seems good.

The show at the Neue Galerie is “Vienna 1900: Style and Identity” (extended through August 8). It is an ambitious attempt, in the words of the museum’s president, Ronald S. Lauder, “to bring to life a time and place of incredible richness,” with all “its intellectual strength, its sensuality, and its emotional richness…” Included are more than 150 paintings, sculpture, works on paper, architectural models, fashions, furniture, and household artifacts, in a show that headlines (among architects & designers) Otto Wagner, Josef Hofmann, Kolomon Moser, and Adolph Loos, and (among artists) Gustav Klimt, Egon Schiele, Oskar Kokoschka, Richard Gerstl, and Gerstl’s pupil, Arnold Schönberg (better known as a composer, and the developer of the twelve-tone scale). “Vienna 1900” was co-organized by Jill Lloyd, an independent curator, and Christian Witt-Dörring, adjunct curator of decorative arts at the Neue Galerie; they co-edited its luxuriously illustrated, 288-page catalogue, which chronicles “the evolution of the concept of modern individual identity,” in scholarly essays by Philipp Blom, Claude Cernuschi, Jean Clair, Alessandra Comini, Geoffrey Howes, Lloyd, Christian Welkop, and Witt-Dörring.

The two floors of the museum customarily devoted to exhibiting both the permanent collection and special exhibitions are entirely devoted to “Vienna 1900.” The third floor displays the handiwork of architects and designers in two of its three galleries, while evoking the spirit of the Vienna Secession in a third with paintings and sculpture either actually exhibited there, or similar to those that were, especially by foreign artists. Included in this gallery are four large, square, splendid, and predominantly green landscapes/cityscapes, three by Klimt and one by Schiele, that are among the freshest paintings on view. I was even more delighted with the clean, brilliant grace and functionality of the furniture and architectural models by Hofmann, Loos and Wagner, even though many examples of their smaller household artifacts (vases, silverware, etc.) looked familiar (as though I’d seen them before in this same setting). The furniture and architectural models especially look modern by any standard (as opposed to the paintings and drawings, which are “modern” only by the more conservative standards of Vienna).

The second floor focuses almost entirely on paintings and works on paper, especially by Klimt, Kokoschka, and Schiele. The largest gallery is entitled “Representing Women in Vienna 1900,” and, not surprisingly, contains paintings of women, mostly full-length. Some are academic and/or sentimental, but the charm is undeniable of Klimt’s several heavily-brocaded studies of females, especially “Hope II (Vision)” and “Adele Bloch-Bauer I” Kokoschka’s more conventional, but still trenchant portrait of “Mrs. Karpeles” also stands out.

The second-largest gallery is called “Unmasking the Inner Man,” and purports to show the interrelationship between art, psychology and medicine. It juxtaposes a facsimile of the couch of Sigmund Freud and a portrait of him (loaned by the New York Psychoanalytic Society) with portraits of mildly tormented-looking men by Kokoschka and a painting by Schiele of a desiccated-looking nude couple, presumably just after coitus. The problem with this gallery (and with the show as a whole) is that neither Freud’s psychology nor abstruse political and sociological issues as a whole can easily be conveyed by examples of visual art (if the visual art is to be any good as art). Besides, Freud in particular was no friend to modern art, as is obvious to anybody who has read his writings about art and literature. In novels, his tastes ran to pot-boilers (which he seems to have thought answered to the fantasies of the largest number of readers). In the visual arts, he argued that beauty was that which most resembled the female form, thus representing a sublimation of the sex drive. (When in later life, he came up against the surrealists, he had little use for their painting, even though they thought they’d been inspired by his writing)

The last gallery, entitled “Fear, Fantasy, and Dreams,” displays works on paper (and was appropriately dimly-lit). Many, especially by Klimt, portray female nudes masturbating, and I’m afraid I just couldn’t get past this subject matter. For me, the most sensual art suggests, it doesn’t shout. The best sex is private, not public. Go ahead, call me a prude. I can live with that in my old age. What redeemed this gallery for me was the small, haunted and haunting heads of men by Schönberg, collectively known as “Gazes.” Better than anything else in this show, these heads summon up the poignancy of Alt Wien, caught between the burgeoning industrialization of the modern age and the strictures of a decadent, monarchical social structure — which would be swept away by World War I, leaving behind dangerously decaying remains.