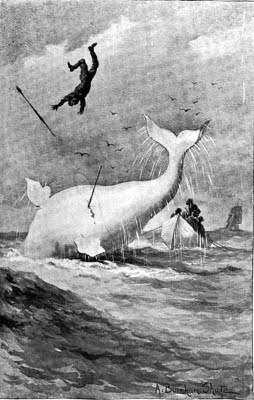 Abstract paintings by Arthur Yanoff and representational photographs by Kay Canavino explore the relationship between the Berkshires landscape and author Herman Melville, who completed Moby Dick, his most famous novel, at Arrowhead, his farmhouse near Pittsfield, MA (now a National Historic Landmark and museum). About 30 paintings and photographs, under the title "Reflections on Melville," are on view in “The Barn” at Arrowhead through October 9. Another 30 paintings and photographs, under the titles of "Herman Melville and Nathaniel Hawthorne" and “The Berkshire Countryside and Herman Melville," are on view through August 7 at Eclipse Mill, a gallery in North Adams, MA, directed by Ralph Brill. This latter exhibition can also be seen in the First Congregational Church on the campus of Williams College in Williamstown, MA, from August 11 to October 7.

Melville was at the peak of his fame among his contemporaries when he purchased Arrowhead in September 1850. A native of New York City, he’d first gone to sea as a cabin boy on a merchant vessel bound from New York to Liverpool in 1839, when he was only 20. Returning briefly, to complete his schooling, he sailed again in January 1841 aboard the whaler Acushnet from New Bedford, MA. After the Acushnet got to the South Pacific, Melville deserted it for the Marquesa Islands in July 1842. There he lived for three weeks among the natives, before boarding another whaler bound for Hawaii. In Honolulu, he disembarked again, to spend four months on land working as a clerk. Then he joined the crew of the United States, a U.S. Navy frigate, which eventually landed in Boston in October 1844. These travels furnished much of the raw material for five novels, published between 1846 and 1850. Typee and Omoo, the first two, were the biggest successes, dealing as they did with romance and adventure among the natives of the Marquesas and Tahiti. Mardi, next in the sequence, dealt with much the same subject matter but puzzled some readers with its apparent symbolism. Still, Melville had no trouble finding publishers for his next two novels, Redburn and White-Jacket, based respectively upon his trip to Liverpool and his experiences aboard the frigate. They were at least moderate successes.

The author had already begun Moby Dick when he took up residence, presumably in late 1850, at Arrowhead, a locale chosen because his wife had family nearby. He completed that novel and published it the following autumn, in 1851, but the reviews were mixed. The critics, it seems, couldn’t cope with its symbolic overtones either, or its frequent introduction of subsidiary material such as whaling lore (though all of Melville’s books, even the earlier ones, combined personal experience with meticulous research). Moby Dick’s initial U.S. printing, of 3,000 copies, never sold out. Melville’s U.S. earnings from the book were to total only $556.37. Though he seems to have realized about the same amount from its publication in Great Britain, this was still not enough to live on. His next book, Pierre, or the Ambiguities (1852) was crucified by the reviewers (one even called him insane). He was forced to turn to short stories and novellas published in magazines because he couldn’t get publishers for his next novel, but among these shorter pieces (collected in The Piazza Tales,1856) was “Bartleby, the Scrivener,” a cryptic tale of Little Old New York that has been interpreted as a bitter parable on the fate of writers who run afoul of critics.

After 1856, Melville’s publishing career more or less ended. He left Arrowhead in 1863, moved back to New York, and attempted to support himself and his family by giving lectures. He also attempted poetry, but by the time he died, at the age of 72, in New York City in 1891, he was pretty much forgotten. As early as 1876, all his books had been out of print. His lifetime income from his writings as a whole had come to only just over $10,000, and his last, unfinished novel, Billy Budd, remained unpublished – that is, until “the Melville Revival” began, decades later. Initially sparked by Raymond Weaver’s 1921 biography of the author and by Weaver’s publication of Billy Budd in 1924, it was helped along by the admiring writings of D.H. Lawrence in England and such American literati as Lewis Mumford and Carl Van Doren. Most of all, it was sparked by the changed literary climate of the period -- in the wake of World War I, and with the rise of a modernist outlook, one that admired more complex treatments, even of familiar subjects, and a more problematic view of existence. Today, of course, Moby Dick is viewed as one of the great novels of all time, anticipating modernism by decades. But this has come only after the author and his masterpiece hovered for many years under a dark, dense cloud.

I haven’t seen the show at Eclipse Mill, but I did attend the opening at “The Barn,” and got there beforehand, so I could take the tour of the house. It’s a charming place, with elegant period furniture and accouterments, while the tour, conducted by Kurt Masdea, was most illuminating. After we’d completed our visit to the ground floor dining area and parlors, as well as the master bedroom on the second floor, he ushered us into Melville’s second-floor study, and showed us how, from his desk and through the window, Melville would have had a magnificent view in the distance of Mt. Greylock, the state’s highest peak (at 3,491 feet). The novelist is said to have commented upon how much its summit resembled the back of a big white whale (most likely at some point between October and May, when it would have been wreathed in snow). The exhibition by Yanoff and Canavino takes off from that premise, dramatizing the parallels and similarities between the rocks and forests in the area and Melville’s concepts of a big white whale, the good ship Pequod and tormented Captain Ahab.

Samantha Pinckney, the independent curator who organized the show, sees Yanoff and Canavino as representative of two types of landscape painting in the 18th and 19th centuries, with Yanoff personifying the sublime, and Canavino, the picturesque. “The works of both of these talented artists,” she writes, in her statement, “parallel the work of Melville in their exploration of nature as awe-inspiring; as at once picturesque and sublime, cathartic and capable of striking terror into the heart of the viewer.” If I recall correctly from graduate school, the original pairing, as defined by Edmund Burke and Immanuel Kant, was the beautiful v. the sublime — the former being life-enhancing, the latter, life-threatening, the former personified by the serene landscapes of Claude and the latter, by the stormy landscapes of Salvator Rosa. The picturesque, which came along later, was maybe a mixture of the sublime and the beautiful, maybe a scaled-down version of the beautiful, anyway pretty little pictures tailored to English and American tourists bothered by Continental extremes (though the English also produced painters exemplifying the original pair, Turner for the sublime and Constable for the beautiful).

Given this background, it may not be hard to see that achieving the sublime can be more difficult than achieving the picturesque --- and, as I see it, painting, by its very nature, is both more difficult to bring off successfully than photography and also capable of reaching the viewer on a deeper emotional level. An inevitable corollary is that it’s a lot easier to fall short of the mark in painting. The best of Yanoff’s paintings in “The Barn” communicate feelings that I just don’t get from a photograph, however good, and Canavino’s photographs are very good. However, by the same token, some of the paintings by Yanoff don’t measure up to Canavino’s level of quality – which, if perhaps less ambitious, is also more consistently maintained.

The most effective parts of the show are those in which paintings and photographs (which are hung in alternation with each other) interact with their neighbors, so as to convey at once the emotive power of the landscape with its visual appearance. I was particularly taken by the arrangement on the wall with its back to the reception desk, the first 6 entries on the checklist (4 photographs, 2 paintings). Especially effective is the pairing of “Whale Rock,” by Yanoff, with “Whale Skin” by Canavino, as both pictures share a common, whale-shaped mound. In the Canavino, it’s a lichen-covered rock, and in the Yanoff, it’s a vigorous pale gray shape below, combined with a deep olive green shape plunging down from above, and wavy strokes of black with orange furnishing accents at the top of the painting. It’s the second-best painting in the show, and the next Yanoff on that wall, “Melville’s Dream at Arrowhead,” is the best picture in the show – two-thirds pale blue, one-third pale pink, simply super in its devastating simplicity. I also liked the close-up photograph right next to it of snow-covered twigs, entitled “Island Coral.”

Among the other standout paintings are “Moby-Dick’s Whirlpool,” another vertical canvas with a circular whoosh of blue explaining the title, and “Melville’s Travails,” a deep blue vertical canvas with silvery elements. I found least successful two paintings in which Yanoff’s fondness for collage elements rises to its acme: one has a piece of rope on it and one, a piece of white fabric (an undershirt or T-shirt?). Both bear titles or descriptive phrases (in the checklist for the exhibition) suggestive of shattering or shipwreck, so perhaps these collage elements were meant to suggest the flotsam and jetsam left floating on the waves after the Pequod sank. For me, these elements aren't fully unified into the composition, but of course this enables them to become more successful at conveying an idea.

Canavino’s photographs lovingly document rocks, mountains, flora and (with some animal pelts) even fauna of the area, hardly a loser in the lot. If I had to name a standout, it might be “Whale Mouth,” showing a big, faintly suggestive rock in summer, with ferns and dried grass. I also liked “White Whale View, Mt. Greylock,” showing the mountain in the distance, and “Night Thoughts at Arrowhead,” a view of the house itself by night. I might add that the close-up photographs of leaves, twigs and/or grasses reminded me of photographs that I took, years ago, of the grounds of the Pollock-Krasner House & Study Center on Long Island, and subsequently used in talks to suggest how Pollock could have assimilated their “all-over” imagery into his paintings. And, though not precisely relevant, it’s still worth remembering that Pollock had a dog named Ahab, and that his initial title for the painting now known as "Pasiphae" was "Moby Dick."