FRIDAY AT THE WHITNEY W. THEODOROS 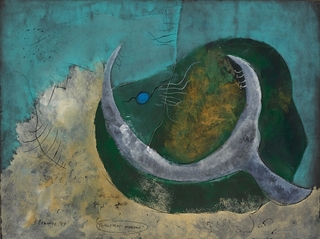 Theodoros Stamos (1922-1997). Ancestral Worship, 1947. 48.9 (c) Estate of Theodoros Stamos.
A reproduction of “The Beach” (1955), by William Baziotes, one of the original but lesser-known first generation abstract expressionists, accompanied a review in the July 27 NY Times by Ken Johnson of “Signs & Symbols” at the Whitney Museum of American Art. Though the review didn’t send me up the wall with delight, it made me want to see the show, for it said that the show was from the Whitney’s permanent collection, and included abstract expressionism.

I assumed it had replaced “Singular Visions,” the irritating display of mostly recent work from the permanent collection that I saw on the top (fifth) floor of the Whitney, when I visited that museum this spring for their Biennial, and commented on in my coverage of that event.

Arriving one Friday afternoon earlier this summer at the Whitney, I saw a long line of people – mostly young – waiting to get in, although the museum had already been open for an hour. The line stretched from the entrance up Madison Avenue to East 75th Street and maybe a third of the way down East 75th Street toward Park Avenue.

My press pass enabled me to move to the far shorter line for members, the media and other lucky souls. At the ticket desk, I learned that the big attraction was “Fireflies on the Water,” by Yayoi Kusama, on the ground floor (through October 28). Described by the Whitney as “a carefully constructed environment of lights, mirrors and water,” it is said to be “a depiction of seemingly endless space,” and timed tickets are needed for entry.

Though visitors are allowed to spend only a minute apiece in this environment, only one at a time is allowed to enter, and the demand for tickets was such that even at 2 p.m. I was offered only a 4 p.m. slot. It was pretty clear that these tickets were going to run out long before the museum closed, but I declined this handsome offer, not only because what I’d come for was “Signs & Symbols,” but also because I’ve seen this wonder, or one very like it, on another occasion.

I can’t remember when, but I recall it as a pleasant but inconsequential experience: a smallish darkened & mirrored room with a reflecting pool of water below the walkway on which I stood, and many pinpoints of light amid the darkness, which stretched out in all directions because of all the mirrors. It reminded me of the “Mirrored Room” created by Lucas Samaras in 1966. I featured that mirrored room in color photography in Time (calling it an “environment;” today much the same sort of thing is called an “installation”).

It can be a bit of a drawback, having looked at so much art in the 60s– it’s lots harder to get a kick out of 21st century novelties when you know they’re not so novel. The big difference between the Samaras & the Kusama is that the former is to be seen in daylight (or equivalent lighting), while the Kusama is dark inside, meant to evoke night.

If I'd paid any attention to the title, I would have been thinking of fireflies flitting over some tranquil country pond, but all the real fireflies I've seen keep on the move, and fade in and fade out, so I was instead reminded of the much more static old Planetarium at the Museum of Natural History, and of the much more marvelous night skies to be seen over the dunes in the Hamptons–or in any place where the surface lighting isn’t so powerful that it blots out the starlight (as alas it does in the Big Apple).

A really good night sky (when the moon is not yet risen or has already set) does offer you “seemingly endless space,” as well as the seemingly endless variety of millions of stars and constellations into which they are grouped. This puts Kusama’s imitation of them in the shade, nor does her imitation have the saving grace of a handmade style to redeem it– the way a Cézanne painting of a tree can offer a viable substitute for the marvelous grace of a real tree (and, as I’ve said before, I’m right in there with Joyce Kilmer when it comes to trees).

A WHITER SHADE OF PALE

Approaching the Whitney’s elevators, I saw that “Signs & Symbols,” instead of being on the fifth floor, was on the second. I decided to take the elevator to the fourth floor, and briefly check out its exhibits, as well as those on the third floor, before descending to the second. On the fourth floor is a second show devoted to “Yayoi Kusama” (through September 30). This is a full-dress retrospective of an artist who was born in Japan in 1929, came to the US in 1957, and then returned to Japan in 1973.

The first gallery I came to exhibited a densely-packed array of medium-sized, shiny abstract panels with squirming surreal shapes in them, rendered in gratingly shrill colors that didn’t encourage me to linger, any more than did the shapes in them. I hurried on – past any number of large & small pale gray objects, including furniture, plus paintings, the latter as boring as any other minimalism from the 60s, the former often embellished with furry, pointed, wiggly shapes that again made me feel uncomfortable.

My notes at this point read, “Weird, but not so weird that it’s worth protesting.” I noted, however, that there were a fair number of people viewing this show – most likely after having seen Kusama’s installation on the ground floor (or perhaps instead of having seen it).

The show on the third floor is “Sharon Hayes: there’s so much I want to say to you” (through September 9). This New York-born artist, born in 1970, is said to examine “the nexus between politics, history, speech, and desire.” The exhibition is said to bring together work which “articulates” what Hayes calls “speech acts.”

What results is a noisy exhibition space, with many recorded voices chattering away at high volume (whether from videos or loudspeakers I don’t know nor do I care). The visual exhibits along the walls consist mainly of a long row of what looks like antique LP album covers, with a lot of writing printed on them & occasional pictures, all dealing with political subjects.

In the center is a big open area, which takes on the resemblance of a meeting hall because of a raised platform in one end, upon which stand many campaign placards of the sort that demonstrators & delegates to political conventions carry, bearing yet more political names and/or messages. My notes on this say, “Didn’t inspire me to either praise or attack,” but all that recorded noise made me anxious to flee, as did all the political references.

In this election year, I am already getting more than enough politics--- in the papers, on TV, over Facebook, and pouring into my email, where every Democratic candidate in the country seems to think I’m going to contribute to his or her campaign.

God knows I wish I could fund them all, as I am very depressed by the hundreds of millions of anonymous moneys that are being funneled into the Republican cause, but my resources are so limited that all I can do is give pennies to Obama and two hard-pressed Democratic Congresspeople in New York. The rest of those appeals are easily deleted on my computer, and I really don’t need yet more politics in a museum.

On down to “Signs & Symbols,” as organized by Donna De Salvo in collaboration with Jane Panetta, with 63 works by 43 artists, mostly from the 40s but some also from the 50s (through October 28). My first impression, upon emerging from the stairwell, was of peace, blissful peace, no noise, and especially no recorded noise. Entering the show, all I could see was mostly smaller paintings. sculpture and works on paper, no objects or assemblage or videos of any kind (though I would later find in a back gallery some fine still photography, especially by Aaron Siskind).

The show as a whole is very tastefully installed, with lots of space, nothing too close together, 2- and 3-dimensional works ingeniously combined. All this contributes to the general impression one gets of blissful serenity, and the feeling that yes, this was a good day to come in out of the overheated streets of Manhattan, and enjoy a few moments in the calm, air-conditioned cool of Marcel Breuer’s modernist masterpiece. To be sure, part of the reason for the blissful quiet was the fact that very few people were in the galleries besides me, but hey, this is nothing new for me, and no reason not to enjoy a show.

What did detract from my pleasure was the wall text at the beginning, which (in more circuitous language than I choose to use) explains that the show focuses more on the figurative than on the abstract, displaying only the semi-abstract, mostly early & mostly surrealistic art of the first-generation abstract expressionists and ignoring the peak of their creative endeavor, namely the phase of pure abstraction which almost all of them passed through, and, more often than not, stayed with to the end of their careers.

The wall text further explains that the reason for this omission is that the curators want to show how all this early, semi-abstract surrealistic art can be seen as antecedent and progenitor to the figurative art of neo-dada in the later 50s and the overtly representational art of pop in the 60s. Even Ken Johnson appeared to sense, however dimly, that comparing the romantic impulse of surrealism in the 40s with the anti-romantic art of pop in the 60s is like comparing apples to oranges.

True, this is already a fine show. The pity is that could have been so much better, had not its organizers been hamstrung by their pomonian agenda.

Nor will the public get a chance to see the best painters in this exhibition at the top of their game, at least not at the Whitney in the foreseeable future. This is the third of six shows scheduled to re-examine the Whitney’s holdings prior to its move to its new headquarters in the meat-packing district in 2015. The first two dealt with the early history of the Whitney & its least radical holdings from the 30s, 40s and 50s, while the fourth (opening November 15) is entitled “Sinister Pop.”

In spite of its omissions, there is still in “Signs & Symbols” more than enough to justify a visit, & far more than I can tell you about here (not wanting to challenge anybody's attention span). If for no other reason, go for the small gallery at the very back, where one of Breuer’s trapezoidal windows shines down on one of the most magical of all of the sculptures of David Smith – “Hudson River Landscape’” (1951), otherwise too rarely displayed.

In this gallery is also the admirable Baziotes reproduced by Johnson, plus another, equally sweet Baziotes, works on paper by Morris Graves and Herbert Ferber, and the wondrously moody "Ancestral Worship"(1947) by Theodoros Stamos (another underrated member of the first generation of ab ex).

Closer to the entry of the show is excellent early work by Lee Krasner, Motherwell, Rothko and Gottlieb – lots of Rothko & lots of Gottlieb, the latter seen in an evolutionary upward spiral from the pictographs of the 40s to a “Frozen Sound” of the early 50s. And plenty of interesting work by lesser figures who really have had to struggle to emerge from the storage vaults of most of our museums – like the sculptor David Hare.