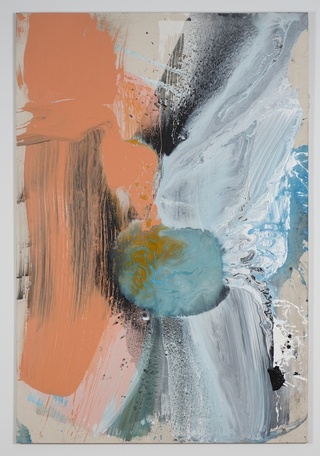 David Smith, of course, I’ve dealt with many times over the years. I wrote about his first big retrospective at the Guggenheim in 1969 for Time, and about his second big retrospective at the Guggenheim in 2006 -- both for this column and for the online edition of Steve Cannon’s “gathering of the tribes.” More recently, I wrote about a Smith show at the Whitney which I felt failed to do him justice.

As his estate is apparently represented by Gagosian, it comes as no surprise to learn that this show was the 9th that Gagosian has staged in cooperation with his estate. It was also one of the more cohesive & appealing. “The Forgings” are a group of ten very narrow, vertical, graceful, varnished or painted steel shafts. They range from 5½ to 7½ feet in height.

All were created in 1955, when Smith was a visiting artist at the University of Indiana, and able to take advantage of a power forge at a factory in Bloomington. He had the assistance of LeRoy Borton, a blacksmith who subsequently became a good friend.

The group was first exhibited at the Willard Gallery in New York in 1956. The Gagosian show was the first time since then that ten out of the original eleven had been exhibited together. They were displayed in a long, narrow gallery, set atop three long & narrow but low polygonal platforms--3 on the first platform, 4 on the second, and 3 on the third.

The forgings themselves were much more interesting, as each had its own separate personality. Although all were narrow & vertical, all had distinctive and somewhat secretively human profiles, with different sets of little bumps, lines incised, even holes drilled and then plugged with more steel.

The gallery press release, and a long article by Roberta Smith of the NY Times on January 3, attempted to show how these works were antecedents to the impersonal minimalism & conceptually-oriented process art of the 1960s—instead of situating them where they belong, as antecedents to the grandly personal sculpture of Anthony Caro, and even more importantly, as splendid examples of the ultra-personal yet grandly ambitious Abstract Expressionism of the period in which indeed they were made—the 1950s.

In other respects, the Roberta Smith piece was surprisingly good. Give her a decent subject, and she’s usually quite capable of writing about it knowledgeably.

She did, however, fail to deal adequately with the haunting analogies between these slender verticals and human--more especially--female figures. Smith often said that he made only girl sculptures, he never made boy sculptures, but evidently his innocent form of sexism is nothing that Roberta wanted to deal with.

Also exceedingly gifted – though maddeningly underrated in today’s busy-busy art scene – is Hans Hofmann. As his estate is represented by Ameringer McEnery Yohe, they too show his work regularly. I’ve now seen a number of their Hofmann exhibitions, and, while this year’s show was better than many of those I’ve seen, it was still not as good as their Hofmann show that I wrote up in my column of March 27, 2012.

Then again, the problem may simply be that I prefer my Hofmann to be in a painterly mode, and this show was decidedly linear (with a number of black outlines). It consisted mainly of paintings and works on paper from the 1940s, often in a somewhat surrealist vein, with some vaguely biomorphic shapes (which shouldn’t be too surprising, considering how much French surrealism was hanging around in New York in the 1940s, but still not quite what one expects from a German like Hofmann). Once again, though, the show demonstrated what a great feel for black Hofmann had, and how dramatically he was able to use it--in areas as well as outlines.

NOT TO MENTION LARRY

Larry Poons is another artist who, in the recent past, has been compiling a formidable exhibition record. The current show, of new paintings at Danese Corey, is the fourth that I am writing about within the year. His last show of recent work, at Danese when it was sharing space with Loretta Howard, was last winter, less than a year ago (see my column of February 25, 2013).

Spring witnessed a 9 foot tall,1976 canvas by him featured stage center in a group show of poured paintings at Spanierman (see my column of May 6, 2013). Last fall, Loretta Howard did a show of Poons’s “dot” and “ellipse” paintings from the 1960s, together with even earlier work (see my review on November 11, 2013).

At this point, I am running out of things to say about Poons, beyond the fact that this show at Danese Corey is very colorful, and, as with his last show of new work, distinctive. In my review of that last show of new work, I observed that his mark was unlike that of any other artist. This year, the thing to do--among other observers-- seems to be to compare his work with previous artists.

One of my friends on Facebook (I can’t remember who) suggested analogies with Monet. Another friend cited Monet & Renoir. Roberta Smith, who reviewed this show on January 23, rummaged through art history and came up with a list of artists whom she claimed were in Poons’s head: Poussin, Claude, Cézanne, Renoir, Bonnard, Picasso & Pollock. Although I can see similarities with Monet (especially the very late Monets of the gardens at Giverny—from the 1920s), I would still maintain that anybody who would actually mistake a Poons for a Monet (or for anybody else) doesn’t have much of an eye.

AND SO TO ED CLARK

At the tender age of 87, Ed Clark is a survivor of the second generation of abstract expressionists, the generation that began to exhibit in the 1950s (the first generation had either exhibited in the 1940s or been close to those who had). I first wrote about Clark when I reviewed “The Lure of Paris,” an exhibition staged by Loretta Howard in 2012 of mostly American artists who had migrated to that French capital in the 1950s.

Some had come to study in French schools with the aid of the GI Bill of Rights, some to avoid the strictures of American society, some because they simply wanted to drink up the atmosphere of the city that had certainly been capital of the art world from the 18th to early 20th centuries—and was believed by many in the 1950s to still enjoy that role. Clark came for all those reasons.

Born in the Storyville section of New Orleans, he had served during World War II with the U.S. Army Air Corps in Guam, and hence was able to enroll at L’Académie de la Grande Chaumière in Paris (having previously studied at the Art Institute of Chicago). In the later 50s, he returned to New York and exhibited at the Brata gallery on Tenth Street, where George Sugarman, Al Held & Ronald Bladen also exhibited.

Clark was one of the first African-Americans to participate in the Tenth Street scene, and is credited with being the first (of any race) to exhibit a shaped canvas—which he did, at the Brata gallery, in 1957.

More importantly (in my opinion), he has (like Pollock & Frankenthaler) long worked on the floor. He pours acrylic paint onto his large canvases, letting gravity play a part. After experimenting with large brushes, he eventually settled upon the use of brooms: these allow him to achieve the grand sweeps of color that have become his hallmark.

His current show, “Ed Clark: Big Bang,” runs through February 22 at Jack Tilton, and has one dynamite painting from 1959, “Winter Bitch” (the same painting that I so much admired in “The Lure of Paris”). The rest of his work on view was done in this century. I’m happy to report that, although Clark has become even more improvisational and distinctive with the years, he has not succumbed to the elephantiasis which has afflicted so many big names from the 50s and 60s in their old age.

Some of the paintings in this show are built around a series of broad, mellow horizontals, laid one atop the other. They are good-looking, too, but the two paintings I most esteemed utilized more active paint. The tall, narrow untitled one at the entry is one case in point, with lots of very loose, free white shapes, and accents of pale gray, pale blue, pale green & slightly brighter red. It has a waltzing, dancing feeling.

The other, also untitled but dated 2004, hangs in the front gallery upstairs on the second floor. It, too, is a vertical, with honeyed colors: black, white, peach and aqua applied in vertical swoops around an oval near the center and icy blue verticals at the right. It’s probably not fashionable to suggest a kinship here with color-field painting, but without a doubt, this painting displays Clark’s very real talents as a colorist.

About Poons and history: I have never understood the obsession to associate one artist with another from the past. Certainly, it is relevant from time to time. But all the time? Art historians have managed to confuse their discipline with getting art.

I think it has to do, on the one hand, with perceiving how "original" the artist is (or isn't)--and on the other, with perceiving how distinguished is (or isn't) his or her lineage. In the first case it is (or can be) a subtle form of attack, and in the second,with a subtle form of praise. With Poons, I think it is mostly meant as compliment, by suggesting analogies with artists we all admire, but sometimes (as with Roberta) I think it's a suggestion that he has become too "familiar."