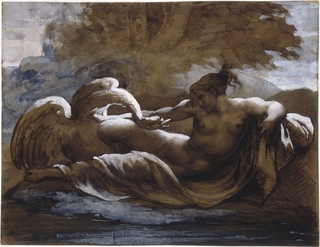 To the unsophisticated art-lover, a drawing is merely lines made by a pencil or pen upon a piece of paper. To a museum curator, a drawing can be almost anything except a print, as long as it’s made on paper (sometimes not even then) This means that a drawing can be colored with pastel, watercolor, or gouache, various kinds of chalk and wash—a modestly-scaled painting, in other words, in all but its ground. To the postmodernist art historian, it has the additional --- if purely nominal--- charm of emphasizing draftsmanship at the expense of color, for to postmodernists, as I may have said before, the primacy of color is a no-no, just as a Romantic emphasis on emotion is a no-no and a neo-classical logical, rational, or at least intellectual approach to art seems more desirable.

Somehow, though, color, emotion and the subversive Romantic outlook that they embody come to the fore in the latest offering at The Morgan Library & Museum, which is entitled “David, Delacroix, and Revolutionary France: Drawings from the Louvre” (through December 31). Organized by Louis-Antoine Prat, curator at the Louvre, and Jennifer Tonkovich, curator at the Morgan, with the assistance of Esther Bell, a curatorial fellow at the Morgan, this splendiferous collection of eighty “drawings” is – according to the “time line” posted at its entrance - intended to evoke the turbulent period in French history that began in 1771, when Louis XVI became king of France, and ended in 1852, when Louis Napoleon established the Second Empire. The four stars in this period are David, Ingres, Géricault, and Delacroix, the first two neo-classicists and the last two, Romantics—and, would you believe it, there are 16 drawings in this show by the last two, and only 15 by the first two!

Of course, no statistician would call this a significant imbalance, and the Morgan has hastened to reinstate itself in the good graces of the postmodernists, not only by installing a singularly repellent piece of contemporary conceptual sculpture by Xu Bing in its oversized Renzo Piano lobby, but by displaying a completely delightful small exhibition of 17 drawings & 3 letters by Ingres, entitled “Ingres at the Morgan,” in its boutique Clare Eddy Thaw Gallery (through November 27). I confess, I’ve never been able to warm up to David, except for his portraits (no really good examples of which are on view). But I love the portraits of Ingres, and they are well represented in both shows. The women come off better than the men, whether the Master of Montauban is depicting a lovely young lady or rather comically dowdy older ones. The men are stuffier, maybe because Ingres felt obliged to treat them with proper respect.

The vigor and freedom of Delacroix are seen at his best in two pages of preliminary studies for "The Death of Sardanapalus" (1827), the one of turbaned men and female nudes being especially lively.Also — at the very entrance to the show - is a beautiful early sketch for the figure of Liberty, to be somewhat more adequately clothed for the painting of “Liberty Leading the People”(1830). The studies of Géricault are all marvelously powerful, especially the ones with horses. The page with many drawings of a cat’s head are fascinating as drawings, even if only 3 or 4 of them really look like cats (cats are notoriously difficult to depict). And Géricault could create voluptuous women, too, as is demonstrated by his passionate, subtly-tinted vision of “Leda and the Swan.”

That said, the rest of the show is maybe a trifle off balance — not that there aren’t many illuminating lesser lights represented, but where it should be well-endowed, it is somewhat lacking, and where it is well-endowed in quantity, it is less endowed with quality. My take on this show is, I will admit, influenced by a wonderful course that I took in 1975 with Allen Staley at Columbia, and more specifically by one of the books on Staley’s “suggested reading” list. This was “David to Delacroix,” by Walter Friedlaender, first published as “Von David bis Delacroix” in 1932, when its author was still living in Germany and teaching at the University of Freiberg. Friedlaender (1873-1966) was an interesting art historian (at least to other art historians like myself). His outlook was formalist — not surprising, since he himself had studied with Heinrich Wölfflin, the founder of formalist art history — but among his first pupils in Germany was Erwin Panofsky, who more or less invented iconography.

In 1933, both he and Panofsky were dismissed by the Nazis from their teaching posts on racial grounds (somewhat ironically: although Friedlaender's birth parents were Jewish, he was orphaned at an early age, and reared as a Lutheran). Both men eventually came to the United States, where Panofsky came to rest at the Institute for Advanced Study, and Friedlaender at NYU’s Institute of Fine Arts. Friedlaender was both a scholar of 16th century Mannerism and a modernist. Among his modernist students were some figures still well-known in the 70s: Robert Goldwater, Milton Brown, and Robert Rosenblum. “Von David bis Delacroix” was translated and published in English in 1952 (and to this day is available in a modest paperback at amazon.com). Although as I say Staley put it on his suggested reading list, he also disparaged it as characteristic of the old-fashioned (i.e. formalist) way to looking at art history, and recommended instead Bobby Rosenblum’s “Transformations in Late 18th Century Art” (1967), which I must have read but of which I retain no memory whatsoever.

Staley did show us many excellent slides of paintings by artists whom Friedlaender celebrated & who are also included in the Morgan Library show, but sometimes underrepresented in it. I think here in particular of François, Baron Gérard and Antoine-Jean, Baron Gros, two proteges of David who created some memorable images during the Napoleonic era, and were enobled by Napoleon himself, but who are seen at the Morgan in only three inconsequential pieces between the two of them (no doubt their work is hard to come by). Another artist whom Friedlaender & Staley emphasized, but who is well represented at the Morgan is Anne-Louis Girodet de Roussy-Trioson(a man, despite his first name, and seen to good advantage in his portrait of Fermin Didot). On the other hand, there is more work by Pierre-Paul Prud’hon from this same period than to me appears justified. I understand that John Elderfield of MoMA is very high on him, but Staley omitted him altogether from his course, and to me he is an awfully sappy painter, as Friedlaender well knew.

I also saw too many feeble Salon painters in the second half of the show, of whom the best known are Ary Scheffer and Paul Delaroche. Up until about 1820, the French Academy was still turning out artists of merit, but after that, we get denatured attempts to combine Ingres & Delacroix into a style known as “le juste milieu” (the term has since been appropriated to apply to Salon painters who aped the impressionists in the 1880s). Théodore Chassériau was one of the few painters who could combine Ingres with Delacroix, and I was happy to see four works by him in this show, especially the sensitive portrait of Alphonse de Lamartine, the poet. And there are other nice things here as well, sometimes just where I least expected them. For example, I liked a couple of really neat colored animal pictures by Antoine-Louis Barye, better known as an animal sculptor. But the big discovery for me was the delicate but enchanting “View in the Forest of Fontainebleau” (1828) by an artist I’d never heard of before, Théodore Caruelle d’Aligny (1798-1871).