CUTTING DOWN A GIANT 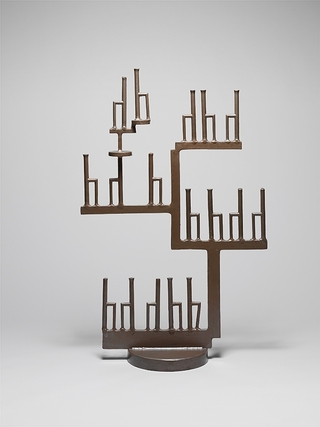 David Smith (1906-1965). 17 h's. 1950. Painted steel. 44 1/2 x 29 x 12 1/2 in. (113 x 73.7 x 31.8 cm). The Estate of David Smith (c)The Estate of David Smith/Licensed by VAGA, New York. Photo courtesy of the Estate of David Smith, photo by David Heald.
“Procrustean” is the word that came away with me from seeing “David Smith: Cubes and Anarchy” at the Whitney Museum of American Art (through January 8). For the benefit of those without a classical education, Procrustes was a nasty old guy in Greek mythology who kept a hostel of some sort by the wayside and would invite travelers in to spend the night, then force them to fit into his bed even if they were too short or too tall for it—alternatively by stretching them on a rack if they were too short, or cutting off their legs if they were too tall. Since David Smith was a giant among sculptors, what has happened to him with this show is, in effect, cutting off his legs to make him appear a mere mortal. I feel sorry for those younger people who didn’t get to attend the magnificently comprehensive retrospective held in his honor by the Guggenheim just five years ago. They will come away with a very diminished picture of Smith’s art from the Whitney’s exhibition—although the Whitney itself isn’t entirely responsible. Let the responsibility be distributed equally: the show was organized by the Los Angeles County Museum of Art, and staged there earlier this year.

How is this belittlement accomplished? Well, according to the press release, the show examines “the abiding importance of geometric form” in Smith’s work “from his earliest small works through the monumental late masterpieces that he created in the final years of his life...the exhibition brings together approximately 60 works, including the largest grouping of Smith’s “Cubis” and “Zigs” assembled in more than two decades.” In other words, as the show’s title indicates, it is an attempt to locate the artist solely in the tradition of cubism, and ignore or exorcise his relationship to surrealism. The labels in the show speak of his early work in the context of Picasso and Julio Gonzalez, of course, but there is also a clumsy attempt to make him appear a linear descendant of Malevich – the better, one gathers, to cast him as a forerunner of minimalists like Donald Judd and Richard Serra by dumbing his work down to their level.

I have nothing against the “Cubis” and the “Zigs” (from the early ‘60s). They’re very handsome pieces, and they look fine in the generous spaces of the Whitney’s high-ceilinged fourth floor. So do the occasional “Tank Totem” (from slightly earlier), and the smaller, ultra-simple silver pieces (an aspect of Smith’s oeuvre that I don’t recall from the retrospective). Also appealing are the rafts of works on paper (mostly from the Smith estate, despite the best efforts of its custodians to unload them---somewhere in the Smith Estate folders of the Clement Greenberg Papers in the Archives of American Art, it is recorded that Greenberg, at one point during his years as executor, persuaded Larry Rubin, then at Knoedler’s, to represent and sell these works for some absurdly low percentage of the gross—at most, 20 percent, and more like 15—at any rate, far below what most dealers charge).

If you feel that half a Smith is better than none, by all means beat feet to the Whitney. But bear in mind that most of the work you’ll see emphasizes his heavy, monolithic, and most static side. The few small pieces from the ‘30s and ‘40s included have been carefully chosen to underline the “geometric” theme, and they are comparatively awkward. There is nothing here to rival the airy grace of “Suspended Figure” (1935) or the gaudy charms of “Home of the Welder” (1945), with its vigorous allegiance to the surrealistic biomorphic and the representational. There’s comparatively little from the early ‘50s, when Smith reached his apogee of “writing in space” with supple, subtly allusive and infinitely lively works like “Australia” (1951) and “Hudson River Landscape” (1951). The best piece in this show is the dulcet “17 h’s” (1950), with its inventive lettering & sly humor. Teetering, as it does, on the edge of allusion, it is also least representative of the works on view.

The heaviness of so many of the works on view at the Whitney is oddly similar to the choice of monumental, heavy works by Anthony Caro for the roof garden of the Metropolitan Museum this summer --- but at least those works seem to have been chosen because they were appropriate to an outdoor situation. The reviewer from the NY Times evidently didn’t know this, but to those who have followed Caro’s career more carefully than he apparently had, these works aren’t representative of his entire output, even during the period when they were made. The selection of Smith’s work at the Whitney doesn’t have the excuse of the weather. What we are left with --- and without apologies --- is a show with the artist’s most brilliant years largely ignored, and to what end? To judge from the press release, the idea is to take David Smith out of the context of abstract expressionism, to suggest that he had nothing in common with painter contemporaries like Pollock and Rothko.

The fact is that he achieved in the realm of sculpture precisely what they achieved in the realm of painting, which was a synthesis of surrealism and cubism, a bringing together of disparate elements to create a new and exciting whole. Then again, abstract expressionism seems to be under a cloud these days, as can be seen also in the current de Kooning retrospective at MoMA. There, it is the artist’s cubist antecedents and allegiances that have been swept under the rug in the interests of making him appear just as interested in human nature as the surrealists, and if anything more of a representational painter than an abstractionist.

Surrealism itself seems more popular than cubism these days, especially academic surrealism, with techniques that would-be painters learned in art schools in the old days—modeling & shading, perspective, etc. The freer form of automatist surrealism, as practiced by Miró and Masson, has never had the popular appeal of the slick academicism of Dalí and Magritte and Tanguy, and the heavy hand of that trio can be seen at the Whitney Museum of American Art on its second floor. There the museum has mounted an extensive representational show to balance off the Smith, mostly from its permanent collection, and titled “Real/Surreal” (through February 12). Ranging from Edward Hopper to George Tooker, from Andrew Wyeth to Paul Cadmus, and from Philip Evergood to Louis Guglielmi, these works by American painters are intended to underline the similarities between “realism” and surrealism. Admittedly, the parallels are there, if only because the show illustrates how much the American “realists” were imitating the styles of the European academic surrealists.

Here are all the old familiar American representational warhorses from the 30s, 40s and 50s that the Whitney was showing and buying when David Smith was creating his inimitable style. The names of many of these artists may not ring bells with most of my viewers. They’re familiar to me because I lived with them while writing my dissertation, reconstructing the 1940s as that decade saw itself and re-reading the pages of Time magazine from that period, when its Art section was written by a critic who couldn’t stand abstract expressionism. But there’s no doubt that Guglielmi & Co. appeal to people who still can’t get used to abstract art: the second-floor galleries were more crowded than those on the fourth floor when I was there. The problem, as I continue to see it, is that too many people still can’t appreciate the humanity in good abstraction. Shows like “Cubes and Anarchy” don’t help them to see it, either.