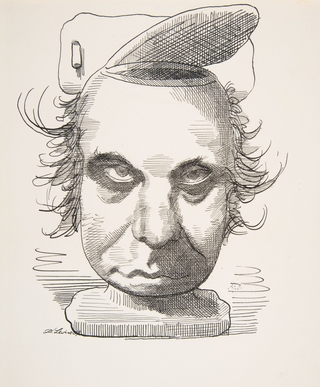 At the moment, there are just too many good shows at The Metropolitan Museum of Art for me to review them all (or for that matter, even get around to seeing them). In all seven of the galleries normally devoted to the Met’s own collection of Chinese art, there is “The Art of Dissent in 17th Century China,” a huge exhibition devoted primarily to scroll paintings and calligraphy from the Chih Lo Lou Collection in Hong Kong (through January 2). This is art made by scholars and artists who remained loyal to the Ming Dynasty when China was being invaded by the Manchu barbarians—who, when they had achieved complete dominance, became the Qing Dynasty and ruled until Sun Yat-sen and his allies overthrew them in 1911 and set up the Republic of China. Although the paintings in this show—all nature studies and almost all landscapes—are lovely, it is difficult for me, a mere Westerner, to see much difference between them and other, earlier ones that I’ve seen before–most recently, in the magnificent exhibition of Yuan Dynasty art held at the Met just a year ago, which I had the pleasure of seeing with David Evison. Maybe because he was there to guide me, I got more out of that show; also perhaps because the work itself was more vivid and dynamic. I am told that the Chinese can’t see any difference between the different kinds of Western art, though this may be overdrawn. Between Monet and Renoir I can agree it might be difficult for an Asian to distinguish, but surely even an Asian could see the difference between a historiated Romanesque capital and a sculpture by Donatello. Then again, I am unaware that the Chinese underwent any artistic revolution comparable to the Western world’s Renaissance. Go ahead, shoot me for being an unregenerate Westerner. I will say that the two illustrated scrolls that I found most distinctive were the two beautiful ones portraying close-ups of vegetation by Gui Changshi (1574-1645) and his son, Gui Zhuang (1613-1673).

The other big show at The Metropolitan Museum of Art that I have seen is “Infinite Jest: Caricature and Satire from Leonardo to Levine,” (through March 4). It’s great fun, though I must concede that, while I was laughing out loud at some of the 15 or 20 offerings that I saw first, hung on the entry walls of the exhibit, I had sobered up by the time I had waded through all of the 163 works of paper in the show itself. As E. B. White once wrote, “Humor can be dissected as a frog can, but the thing dies in the process....” Not that the labels & the wall texts don’t leave some room for the observer’s imagination to fill in gaps, but once one knows that one is being called upon to be amused, it becomes that much harder to respond in kind. Besides, humor is heavily dependent upon surprise, and as one moves through the three large galleries devoted to this show, one ceases to be surprised – one may marvel, of course, but that’s not quite the same thing as laughter.

As organized by Constance C. McPhee and Nadine M. Orenstein, both curators in the Met’s department of prints and drawings, this show is all or virtually all works on paper. It begins officially with caricatures by Leonardo, (though little is made of the fact that these are fantasie, or compounds of different facial features into single grotesques–an insight I gained back in 2003, with the Met’s magnificent exhibition of Leonardo’s drawings). Proceeding by subjects, we are introduced to caricatures of people as animals & people as objects, followed by satires upon the foibles of the past four or five centuries from eating & drinking to fashions to processions to the art world & winding up with politics and celebrities. Included in the galaxy of satires and caricatures by great artists, we have engravings after paintings by Breugel, caricatures by at least two, maybe three Tiepolos, four exquisite scenes from “Los Capriccios” by Goya, and social and political commentary by Delacroix, but most of the work is by artists best known for their graphic & satiric work, including James Gillray, Thomas Nast, Honoré Daumier, J. J. Grandville, William Hogarth and Thomas Rowlandson. For my money, there is not enough Hogarth or Grandville, I’ve seen funnier Daumiers, and there is entirely too much Rowlandson (19 prints, or better than 10 percent of the show). But that is the sort of thing which happens when an exhibition is selected almost entirely from a museum’s permanent collection: one is dependent upon the kindness of past benefactors, and, from the checklist, it would appear that one of the Met’s most passionate benefactors, a certain Elisha Whittelsey, was a great admirer of Rowlandson. Ah well, there is no free lunch.

That line-up at the entryway to the show, however, is so stellar that nobody should overlook it. Among its attractions are a huge lithograph by Nadar, done in 1854, and showing his “pantheon” of Parisian celebrities of that moment. Coupled with it is a huge drawing by New York’s Al Hirschfeld, showing “Americans in Paris;” Though done in 1951, it incorporates celebrated Americans in Paris from the 1920s onward, thus becoming a kind of “Midnight in Paris” avant la lettre (a reference that may mystify those unfortunate souls who haven’t yet seen this latest & most excellent movie by Woody Allen). Also on view in this external display at “Infinite Jest” are a hilarious portrayal of Britain’s corpulent future King George IV as “The Prince of Whales” (1812) by George Cruikshank, and a delicious little David Levine drawing showing Claes Oldenburg as a soft toilet, created to accompany a review by Hilton Kramer, who (as one might suppose) had little if anything good to say about Oldenburg. The Levine was just about the only work in the entire show that wasn’t owned by the Met, but lent to it. Too bad the museum couldn’t also have asked Mike Lukovich, the Pulitzer Prize-winning cartoonist for the Atlanta Journal-Constitution, to lend or even give them a drawing. I’m sure he would have been delighted to oblige. Those who haven’t yet had a chance to observe his handiwork (at its best) are missing something (anyway, if their politics are on the liberal side).