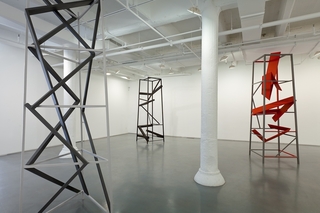 Willard Boepple at Lori Bookstein. Courtesy of the artist & Lori Bookstein Fine Art, New York. Photo: Etienne Frossard.
Two galleries opened 3 shows worthy of note on March 29. I’m sorry that I didn’t get around to reviewing them earlier, but I’ve been troubling my pretty little head over the many comments that David Cohen got for his negative review in artcritical.com of the Jack Bush show at Freedman Art. My positive review of that show has evoked only one comment—and even that, only a short private email to me rather than a public comment at my website. Evidently, crime pays, and this makes me jealous, but I will try to put my spleen on hold & offer comment on those two worthy shows at Spanierman and the one at Lori Bookstein Fine Art.

The two shows at Spanierman (both through April 28) are “Frank Bowling: Recent Paintings” (at Spanierman Modern) and “Arthur B. Davies: Painter, Poet, Romancer & Mystic” (at Spanierman Gallery). This will be the third time in three years that I’ve written about Bowling, the first having been a lengthy review of his mini-retrospective here at Spanierman in September 2010, and the second, a review of the book about him by Mel Gooding, in October 2011. This time, the show consists of 24 medium-sized to very large paintings, all done in 2011 except for the largest, a multi-paneled “Girls in the City” (1991) that covers the entire east wall of the gallery. In fact, the whole fine show is Bowling in an expansive mood, with large, sweeping areas of paint, large pieces of canvas sometimes superimposed diagonally in the center of his paintings, and his characteristically neat, narrow rows of stitched and/or stapled of strips of canvas kept to a minimum, along the borders of some (but not all) of the paintings. “Bed in Memory of ‘Dry River Dan,’” a tall, narrow canvas, is classic in its simplicity, with vertical bands of red, purple and green-gold. “Julie McGee’s Flowers” is an all-green whorl of paint, with lots of dribbled gold in the center, plus a small, gilded round form shaped rather like a bottle-cap in the center, together with some paint-soaked bits of cloth. Sounds overly elaborate – but isn’t. The best painting in the show is the 12-foot-long “Girls in the City,” with each of its seven panels neatly & rigorously covered with broad, shiny & richly impastoed rows of reddish-golden-brown paint, and parts of its substructure the red of blood or fire.

Arthur B. Davies has long puzzled me. In grad school, I learned that he’d been one of “The Eight” painters whose “radical” 1908 group show at the Macbeth Gallery ushered in 20th century American art. I also learned that he’d played a major role in organizing the original (and more genuinely radical) Armory Show of 1913, but the paintings by him that I saw in the histories of American art, of pretty-pretty nudes in fantasy landscapes, sometimes accompanied by unicorns, made him look like a cross between the later & more academic Pre-Raphaelites and French Salon painters like Puvis de Chavannes. In other words, he seemed like Humpty Dumpty, who had somewhere along the line fallen off a wall and broken into two halves, one dedicated to modernist theory and the other to retardataire practice. Hence, my surprise and delight at the group of 16 small to very small paintings by Davies assembled in one of Spanierman’s similarly small but ornately furnished viewing rooms at the back of the gallery. The works on display are all moderately to very informal paintings, most more like studies for larger paintings or sketches sur le motif, but in all the oils, the brushwork reveals itself to be looser and more impressionistic than any of the reproductions I’ve seen indicate, more modern in other words (given that in the early years of the 20th century, impressionism was still a moderately recent style).

“The Horn Players” (ca. 1893), a vignette of orchestra musicians, is reminiscent of Manet or Degas its subject & rich, dark tonalities --- and closer to the more Old Masterly realists among The Eight, John Sloan and Robert Henri. The decorative, pattern-like “Children Playing” (ca. 1896) reminds me of another and equally modern member of The Eight, Maurice Prendergast. Some of the watercolor Davies studies of the Italian Apennines from the 1920s are yet more faithful to their subjects, offering a breath of fresh mountain air to this otherwise somewhat claustrophobic little gallery, but what I found even more revealing was the “Figures in a Landscape” (ca. 1912). This modest oil, only 23¾ x 28¼ inches, somewhat crudely portrays an orgy-like group of three nude couples in a woodland setting; it reminded me vividly of the small studies of groups of bathers by Cézanne that were so much in vogue among avant-garde artists and collectors in the early years of the 20th century (and which accordingly figure prominently in the current show of “The Steins Collect” at the Met). Even more daring --- in concept if not execution – is the “Life Study (Interior)” (ca. 1910), an oil which depicts a standing female nude with faint tints of green in the shadowed parts of her flesh. These suggest to me that Davies had been admiring Matisse, even if he didn’t dare emulate him to the fullest. True, this exhibition also includes paintings that don’t go much beyond 19th century Symbolism, but leaving those aside, its main thrust is to bring together Davies’ avant-garde theory with his actual painting practice, re-uniting the two halves of Humpty Dumpty after nearly a century apart.

“Willard Boepple: New Work” at Lori Bookstein (through April 28) is an enormously uplifting show – in both a literal and a figurative sense. Entering the gallery, one’s eyes are immediately drawn upward by the three 10- to 11-foot tall but slender works that rise almost to the ceiling of the gallery, interacting nicely with its chaste white walls & 2 supporting white columns. Technically, these three are sculptures, yet in appearance they resemble both sculpture and architecture, being composed of two principal elements. The outer structure is a tall, boxlike wood skeleton that reminded me immediately of what are known, I believe, in Europe, as electricity pylons, and in this country, more often as transmission towers—anyway, steel lattice towers erected to support high-voltage electricity cables far above the ground as they snake their way across the country’s wide open spaces. This is the architectural aspect of Boepple’s pieces, and it doesn’t surprise me a bit to learn (from the gallery’s press release) that “Five years ago he began to consider the parameters of these new tower-like structures after being commissioned by a radio station in Syracuse NY to design a 130 ft. broadcast tower.”

But these external lattice-like elongated boxes are only part of these works of art, as they all also have an internal set of strips and slabs of wood that move in, out and around the external lattice tower in a much more fluid, sculptural way. “Ever” (2010), has a light gray exterior box, with dark gray innards. It is slender, and the most graceful of the three, with the center elements sometimes venturing outside of the scaffolding. “What Gives” (2011) has the most movement. Its exterior box is medium-gray with some red elements, and its wide dynamic slabs of red wood in the center are set at crazy angles to each other, so that they almost float. “Heath” (2012) is like a demure little sister. Both its insides and its outside are charcoal gray (or perhaps blackish brown—anyway, very dark); its innards cling to the outside scaffolding, leaving the center almost empty. All three works on view in the gallery are essentially maquettes, made of wood, and not for sale; replicas, however, are available in aluminum. (Almost as an afterthought, behind a velvet rope in the back part of the gallery, are three small sculptures of the same type, all maybe 30 inches high. All three have gray frames, and their center struts are either all red, all yellow or all blue.)

This show is simply fantastic! A real change for Boepple and a positive one at that! I wish I could get my hands on one of the smaller steel sculptures. The Blue one is fabulous!

God bless you, Edwin -- whoever you are(don't think we've met before).