FIVE STARS IN THE GALLERIES 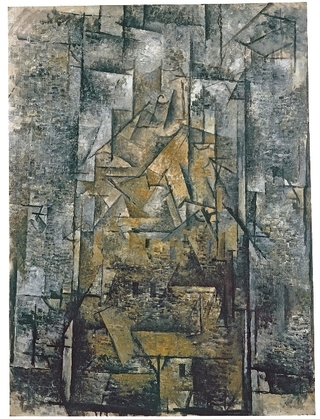 Georges Braque. Céret, Rooftops. 1911. Oil on canvas, 34 3/4 x 25 1/2 inches (88.5 x 65 cm). Private Collection. (c) Artists Rights Society (ARS), New York/ADAGP, Paris
If you can deal with the rarefied air north of 34th Street, four galleries on the Upper East Side have five big stars in good to great shows. Or at least in one case, had not have: I greatly regret not having gotten to “Georges Braque: Pioneer of Modernism,” curated by Dr. Dieter Buchhart for Acquavella until November 30, the day before it closed. I postponed going because of how Roberta Smith treated the show in the NY Times, reproducing in large format one of the later (lesser) Braques, and prattling on about what a revelation the late work was. This led me to believe that the show would resemble the last Braque retrospective I saw, at the Solomon R. Guggenheim Museum in 1988, which included (to the best of my recollection) too much of this late, lesser work and not enough of the early, greater work (centering around Braque’s development of Analytic Cubism between 1907 and 1913 with Picasso, but also including Braque’s earlier, very promising Fauve period as well). Imagine my surprise (& delight) when I got to Acquavella and discovered that more than half of the show is the terrific earlier work!

Admittedly, it was secreted on the upper floor of the gallery, while the later, tamer paintings commanded pride of place on the ground floor. Still, when was it ever easy to gain access to brilliance? Clement Greenberg used to say that four or five good paintings out of say ten or twelve in a gallery exhibition added up to a good show, and here were several times that many. Everybody, I am sure, would have had their own favorites. Mine were “Violin and Glass” (1913), showing how Braque’s hold on Analytic Cubism hung on longer than did Picasso’s; “Gueridon” (1911), showing a less literal version of that subject than did the later painting Smith reproduced; and above all, the positively radiant “Céret, Rooftops” (1911), a shimmering panoply at the very peak of creation.

HENRI THROUGH THE DECADES

Sizeable but still deliciously intimate is “Matisse and the Model,” an exhibition of 46 paintings, drawings, prints and sculpture curated by Ann Dumas for Eykyn Maclean (through December 10). The gallery, at 23 East 67th Street, was new to me; although it has been in business as a private dealership for some years, this is only the second of its public exhibitions (the first, last year, was on Giacometti). The theme is Matisse’s lifelong dedication to working from the model, together with some discussion (in the labels & wall text) of the various models he employed over the years. The show includes a number of everybody’s well-known favorite works, especially in the sculpture (including “The Serf,” “Jeannette V” and the “Large Seated Nude”). But of special interest to Matissophiles like myself is the large number of unfamiliar works. The oil portraits of fully-dressed women in the front of the gallery remind us that to Matisse, these models were human beings as well as decorative objects. The little study in the back gallery for the murals at the home of Dr. Albert Barnes is exquisite, too, but even more pleasurable are the many unfamiliar drawings of women, clothed and nude.

Sometimes they are casually posed, sometimes in unfamiliar and even awkward positions (mostly, they are in the back gallery or facing the wall text, at the entrance). Some of these, like “Reclining Nude with a Dog” (1924) and “Woman in a Rumanian Blouse” (1942) are pen and ink drawings, executed with a cleanness that suggests the master never needed to redraw anything, but equally or even more engaging are the charcoal studies, with much overdrawing, to show how the artist struggled to get the image exactly right. There are five charcoal studies in that little back gallery that I found particularly seductive, especially two from 1939: “Maternité” (with two clothed women and a child) and the enchantingly graceful “Nude (Nu).”

THE MANY MOODS OF BARNEY NEWMAN

The Craig F. Starr gallery is best known for print exhibitions, but on view now are “Barnett Newman Paintings” (through December 17). Of course, the exhibition space is modest, and the six paintings on view are all very narrow—four out of the six, less than 7 inches wide, the other two only, only 16 & 20 inches wide. In height they vary from 23 ½ inches to 82 inches, and they were all completed between 1949 and 1960. They are all “zips,” in one form or another, and yet each one has a definite and different personality. “Untitled 3, 1949” is small, with a broader deep purple stripe on the right, and a narrower scarlet vertical stripe on the left. “Piquant” is the word I’ve scrawled in my notes. The next painting, ”Outcry”(1958) is tall and skinny, with a jagged, thickly stroked column of a very deep green running up its middle. “Impressive,” say my notes.

Third is “Treble”(1960), another small one but with a black center column and two stripes of unpainted canvas running up either side of that column. “Cute—little but aggressive. Black.” Next comes “Untitled I, 1950,” which is similar in coloring to “Untitled 3” but “larger and more prepossessing.” “By Twos” (1949) is “very determined.” It has three major vertical bands painted on it, the ones to the right and left, black, the one slightly to the right of center, a deep gray—and bounded by narrow (minor) blue stripes. “Galaxy” (1949), the last, is the only one that is approximately rectangular (24 x 20 inches). Its field is deep brown, and there are two vertical stripes on it, the broader one to the left olive green, the narrower one to the right a deeper brown. By comparison with all these other narrow, tall “zips,” it looks sedate & “chunky.” So there you have it—for anybody who thinks all the Newman “zips” look alike hasn’t looked at them very closely.

Texas politicians, from George W. to Rick Perry, leave me pretty cold, but Texas collectors can display terrific taste, as is shown by the current exhibition at Greenberg Van Doren (through December 23). On view are “Highlights from the Ernestine and Bradley Wayne Collection,” with a catalogue by Dorsey Waxter, the gallery’s director. The Waynes were Dallas-based, but pursued their love of art through galleries, museums and auction houses in the U.S. and abroad (not least were they visitors at André Emmerich, where Waxter was working and they made her acquaintance there) Mr. Bradley died some years ago, Mrs. Bradley last year. Their three children have kept some of their collection for themselves, but the rest is for us to enjoy (and hopefully, buy) here. Among the artists with work on view are Sam Francis, David Hockney, Hans Hofmann, Paul Jenkins, Louise Nevelson, Pablo Picasso, Frank Stella and Tom Wesselman. The Stella, of two sets of brightly-colored concentric squares, will undoubtedly appeal to many viewers. The Wesselman, a large relief sculpture of a parlor still life with appropriated images from Matisse and Lichtenstein, is a lot more elegant than his kitchen still lifes from the ‘60s.

Still, it will come as a surprise to nobody when I say that, to me, the standouts in this collection are the paintings by Kenneth Noland and Helen Frankenthaler. The Noland is a large and wonderful target, with a soft & cloudy nimbus of golden green, surrounding post-painterly concentric circles of blue, yellow and black, with red at the center. It was originally part of a two-target composition entitled “This and That.” Then, in 1960, the artist cut it in half & made it into two paintings. This one is entitled “This.” (Who knows what became of “That”?) The Frankenthaler is also a good-sized painting. It’s called “Paris at Night,’ and was executed in 1986, marking a return to canvas after devoting much time and energy to designing sets & costumes for a Prokofiev ballet staged at the Royal Opera House in Covent Garden. During this period, the artist was introducing a circle motif into some of her paintings, and “Paris at Night” is built around a glowing white-and-beige oval set high and centrally amidst a velvety, rich & very dark brown field (with a smaller, whiter circle somewhat lower & to the left, a still smaller black circle below that & a narrow vertical strip of slightly lighter brown on the right-hand side of the canvas).

Waxter, in her catalogue essay, suggests that the painting will remind viewers of the Place de la Concorde. I myself (before reading this) was reminded of the cheery lights of a Paris café shining in the night. Both of us, obviously, were influenced by the title, but even so, we got two separate images from the painting, suggesting that like all true abstractions, it’s open to more than one interpretation. Whatever associations you may get from this painting, its darkling field is mystical, magical—certainly, night.