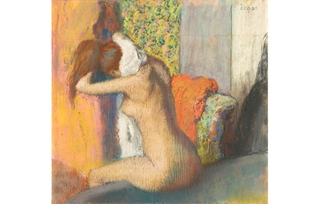 After the Bath, Woman Drying Her Neck, 1886-95. Edgar Degas (French, 1834-1917). Pastel on wove paper. *Paris, Musee d'Orsay, bequest of comte Isaac de Camondo, 1911. * (c) Photo Musee d'Orsay/rmn. *Courtesy, Museum of Fine Arts, Boston.
Beantown is fortunate. At the Museum of Fine Arts, Boston, is “Degas and the Nude,” curated by George T. M. Shackelford, of the Boston museum, and Xavier Ray, of the Musée d’Orsay. This many-splendored exhibition features 160 works (140 of them by Degas), including paintings, pastels, drawings, monotypes, etchings, lithographs and sculptures from more than 50 lenders around the globe (through February 5 at the MFA, Boston; thereafter at the Musée d’Orsay, March 12 through July 1). The show traces the development of the French impressionist’s relationship to the nude in art over some 50 years, and there are so many superb works on view that no review would be adequate to appreciate them all. To repeat a somewhat well-worn phrase, this show has to be seen to be believed.

Officially, it is divided into six sections, each introduced to viewers by a large wall text, but actually, the progression divides itself more naturally into three major phases of Degas’s long career. In the beginning, there are the somewhat academic early paintings, with the first gallery built around “Young Spartans Exercising” (conceived and mostly executed between 1860 and 1862), and the second gallery built around “Scene of War in the Middle Ages” (1863-65). Both of these large set pieces, done when Degas was still in his 30s, were kind of fascinating to me, because I’d been introduced to them – as slides – when I was a graduate school, but never seen them in the flesh. The teacher, Theodore Reff, used them to bolster his argument that Degas was really a product of the French Academy — and indeed, he was, but so were Monet and Renoir, who actually met each other – and Bazille & Sisley --- while all were studying with the French academic painter Gleyre, the difference being that Degas clung to his academic roots longer than the others did. “Young Spartans” in particular is a kissing cousin to the vapid classical scenes of Puvis de Chavannes, and the gallery with “Scene of War” in it is also graced by work of Puvis, as well as equally mature work by Ingres, Delacroix and Goya. These last three (not surprisingly) look better than Degas’s more classical early canvases. Startling and at least as powerful as “Young Spartans” and “Scene of War” is a proto-impressionist Degas in this gallery that I’d never seen before, a very dark & roughly done “Peasant Girls Bathing in the Sea at Dusk” (ca. 1869-1875).

The third gallery is the one that I’d equate to Degas’s middle period. The wall text calls it “The Body Exploited” and it introduces the remarkable series of small & mostly black-and-white monotypes that Degas created in the mid- to late 1870s, depicting scenes in brothels with nude women. Obviously, this subject matter was daring and controversial, not least because so many of the women are depicted with pubic hair, and there’s at least one couple engaged in lesbian sex. For me, however, the abrupt, chunky style of these monotypes is equally radical and demanding. The women look animal-like or brutalized, and not only when they are accompanied in the scene with a fully-dressed client. Yet this very homely way of presenting such creatures paradoxically enough creates vignettes of great power and yes, even beauty.

The last part of this show illustrates how in the 1880s and indeed until the artist’s failing sight made it impossible for him to continue working, around 1905, he devoted much time and energy to studies of female nudes in domestic situations, most commonly before or after bathing (equally memorable are his studies of women in peasant costume dancing from this period, but that’s not part of this show, any more than are his earlier scenes of horses or ballerinas or other “scenes from modern life”). In the 25-year period from 1880 onward, Degas’s nudes become larger and more freely rendered. His luscious jottings of color — especially with the many enchanting pastels – become looser and more like broad brush strokes. It’s true that he disdained the impressionist practice of painting sur le motif and endlessly reworked even the pictures he made from models in his studio, yet in the paradoxically-resulting freedom and sometimes near-abstraction of these late paintings, especially, one can see his essential modernity.

I will say that I don’‘t think the inclusion of other artists in the latter stages of this presentation really adds to its impact. In the middle part of the show, a large & feeble painting by Henri Gervex, a Salon painter whom Degas knew, is close to an embarrassment, and even the perfectly adequate Gustave Caillebotte at this juncture comes off second-best (the Cassatt & the Cézanne, of course, look much better, but these are only minor samples of their work). In the last galleries, the Rose Period Picasso and the Gauguin don’t add much, either, and even the literalness of the Matisse “Carmelina,” though I’m fond of that painting, looks out of place. Why? I ask myself. Perhaps because in these final huge, abstracted Degas bathers, we sense that he’s moved on and out of this mortal world, and is living somewhere on another planet.