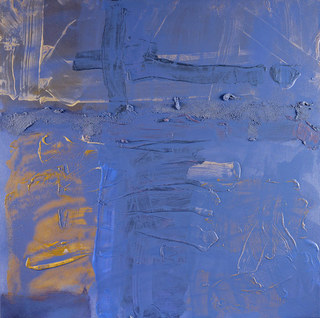 Frank Wimberley (b. 1926). Bayou. 2010. Acrylic on canvas, 50 x 50 in. Collection of Spanierman Modern, New York
Sometimes, it seems, all that an artist really needs is the right gallery. So I conclude, anyway, from Frank Wimberley,” at Spanierman Modern, a vigorous and not-easily-forgotten exhibition of 19 abstract expressionist paintings, brilliantly organized by Alice Hammond (through January 14).

I say, “not easily forgotten” because when I saw three paintings by this artist in a group show at Spanierman last spring, I immediately noticed them. It seemed to me that I’d never seen Wimberley’s art before, yet upon checking my records, I discovered that I had both seen and briefly remarked upon paintings by him on two previous occasions—once in 1999, when he was in a group show at Christiane Neinaber, and once in 2010, when he was included in two exhibitions devoted to African-American abstract masters & staged concurrently by Anita Shapolsky and Wilmer Jennings. On none of these previous occasions, however, did I have more than a few words to say about his work. It was different last spring, when I wrote that I found his work “impressive,” and I find this new, solo exhibition even more impressive. In fact, it is one of the most colorful and intensely individualistic exhibitions that I’ve seen in some time.

I suppose one reason that Wimberley failed to impress me initially was because I was mentally setting up his paintings in a comparison with Frank Bowling. Both are painterly (as opposed to geometric) African American abstract artists who have at various times applied heavy impastos in large sweeps of paint, but where Bowling’s surfaces have tended to look more moist, glossy, and even semi-transparent, Wimberley’s appear drier, flatter, and more opaque. Having spent a lot of time looking at Bowling’s abstractions, I am more at home with them, but thinking it over, I’ve come to the conclusion that in reality comparing the two artists is like trying to compare apples with oranges. Bowling comes out of the tradition that used to be called “color-field” back in the ‘60s and has since become synonymous with modernism, whereas Wimberley’s roots lie in an older, and (at least in some ways) more robust tradition, that of second-generation or “gestural” abstract expressionism, as it emerged in the ‘50s under the leadership of Franz Kline and de Kooning.

Even that description fails to convey Wimberley’s true impact, for in addition to using the brushes that Kline and de Kooning used, Wimberley (b. 1926) has adapted many devices that they never employed. His built-up surfaces are achieved with the aid of pumice, his brushes are sometimes made of steel wire as opposed to hair or fiber, and when he doesn’t get the effect he wants with any of his brushes, he slathers on the paint with spatulas instead. His color sense is bold and straightforward. At times, it can seem garish, but in the current show, a group of four smaller paintings in the small viewing room shows him in a subtler, more gracious mood.

Although the show as a whole is somewhat uneven, the quality of many paintings in it is high, especially those done most recently (Wimberley certainly seems to be on an uptick). In keeping with my artistic education, I still grade paintings on some checklists with none, one, two or three stars. Of the six paintings in this show that I gave three stars to, four were done in 2011, and two in 2010. “String Ensemble”(2011) has a lively, scratched-in, icy blue, all-over look. “Subtle Slough” (2011), one of the paintings in that harmonious small viewing room, is composed of spatulas-full of soft green on softer green. Another one of my favorites is “Untitled” (2011); it’s a long, horizontal canvas, covered with mostly yellow broad vertical strokes, plus just one black vertical coyly peeping out. Still, the one I’ve marked “best in show’ on my checklist is “Bayou” (2010). Dominated by heavenly ocean blues mostly done in horizontal strokes, it has a somewhat beige area over to the left and touches of white up top — everything not too neatly but very harmoniously balanced off.

Incidentally, while you’re at Spanierman Modern, don’t neglect to look in to Spanierman proper, the part of the gallery normally devoted to older artists. On view here is “Artists of the East End II.” Devoted to artists who have lived on the East End of Long Island, it includes a number of gems. Among its goodies are 1) a small, entrancing Maurice Prendergast, “Holiday Strollers, Gloucester” (ca.1907-10), in one of the small viewing rooms; 2) a handsome, ca. 1968 seascape by Balcomb Greene, better known for his abstractions of the 1930s;3) an abstract, subtly-colored 1939 collage by Gertrude Greene, (Balcomb’s wife, but well known in her own right); and 4) a magnificent late Friedel Dzubas, “Barrier” (1983), a horizontal with horizontal sweeps of two greens & two browns. To the best of my knowledge, Dzubas was living in the Boston area when he painted it, though in his earlier days he may have frequented Long Island. Still, one can’t let a mere technicality like this keep such a fine painting out of view. (I do know that during the fateful summer of 1956, when Pollock was killed, Dzubas was sharing a summer house somewhere near East Hampton with Clement Greenberg).

Have always loved Frank's imagery. Thanks for posting this Piri.