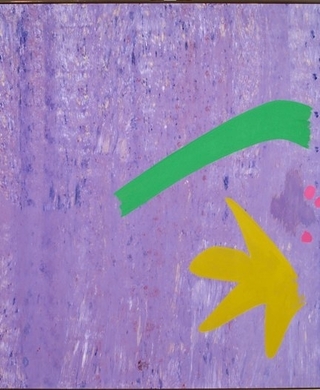 Jack Bush. June Lilac. 1972. Acrylic on canvas, 74 1/2 x 64 3/8 inches. Private Collection. Image courtesy Freedman Art
Two stars are currently in exhibitions in Manhattan. One such show is “Jack Bush: New York Visit” at Freedman Art (through April 28). The other is “Anthony Caro: New Small Bronzes,” at Mitchell-Innes & Nash (uptown branch; through April 5). The Bush exhibition is the more ambitious, with 14 medium- to large-scale acrylics on canvas, dating from 1961 to 1976. But the Caro is not without its charms, consisting as it does of 8 striking small sculptures, all done in 2011, cast and welded in brass and bronze from combinations of found objects and modeled elements. (The original group was 10, but one had been sold and one was on display at the ADAA art fair in the Park Avenue Armory when I visited Mitchell-Innes).

With these small sculptures, Caro returns to the “tabletop” format that he was known for in the 1970s, but without the lightness and airiness that characterized the welded steel pieces of that period. The nearest of this group to that period is “Laughter,” which—with its tight, straight lines -- is also the largest in the show and one of two that overhangs its plinth. The rest of the works that I saw are more compact and muscular, but with rich combinations of contrasting shapes and forms, including cones and portions of hollow tubes. The best, for me, were “Slumber,” which is all based on found objects, and “Pearl,” with a surrealistically modeled element in the middle, effectively contained by the firmer outlines of found objects above & below.

The Bush exhibition is a joy. I expanded upon his career two years ago, when the New York Studio School put on an exhibition of works by him on paper, so now all that I want to do is discuss this show. Those who wish to look up that earlier article can find it in the archives of artcritical.com. (I shamelessly repeated what I’d written there in my own column, adding only a brief paragraph explaining the various reasons why Bush’s later work is not as well known as his earlier work, including the fact that Greenberg’s clout was not as substantial in the 70s as it had been in the 60s, and the further fact that Greenberg himself preferred to insist that “Olitski is our best painter,” and had little to say on the subject of either Bush or Dzubas.)

This show, besides offering real & good-sized paintings---as opposed to smaller works on paper---also focuses to a larger degree upon the later & more individual work. It has only one painting from 1961, “New York Visit,” and from the fact that the entire show is called “Jack Bush: New York Visit, “ I deduce that its organizers think of this painting as Bush’s original breakthrough. So it may be. In the catalogue for the NY Studio School exhibition, Karen Wilkin argued that the artist’s visit from his home town of Toronto to New York in 1961 was crucial, and that it led to a series of pictures featuring a column of stacked blocks of color. Supposedly this whole series was inspired by a mannequin in a Madison Avenue shop window clad in a skirt, a top, and a belt around her middle--which is exactly what you can see in "New York Visit," the painting (at least, if you are the sort of person who can't face the fact that an abstract painting may not be intended to depict anything in particular) . For me, it is little icky to think of this blatantly commercial display as having prompted an epiphany, but hey, every artist is different and if it worked for Bush, that’s all we need to know. Maybe because his day job involved working with advertising, he was inured to the commercial aspects of the window display.

Anyway, “New York Visit” is the only painting from 1961 in the Freedman Art show, and there’s nothing between that and the later sixties, which includes 6 paintings from 1967-69. The four from 1967 and 1968 are perfectly fine, nice paintings with bright colors and simple compositions, but a bit lacking in individuality—generic color field painting, I am tempted to say. Then lo—in 1969, we get “Onslaughts,” which --- in the context of this show --- looks like a second breakthrough picture. True, there’s a series of brightly-colored stripes across the bottom --- a little touch of Noland in the night---but the top is a field of pink across which are scattered a series of floating chips, or maybe chips with dips—anyway, the first sign of an independent personality emerging that—surprisingly---escapes from the “flatness” of the 60s and emphatically reinstates figure and ground.

The remaining 7 paintings—all from the 70s—explore this new territory in various configurations, adding to the freely-brushed qualities of the superimposed figures an additional freely-brushed quality to the grounds (similar in principle to what Dzubas was doing, but with entirely different results: during the 60s, it might not have been difficult to confuse the paintings of the two artists, but by the 70s, each was clearly and definitively himself). “Sing Sing Sing (B. G. 1938)” (1974) is the biggest painting in the Freedman Art show (68 x 114 ¾ inches). It’s also particularly lovely, with a field of orangey-rose, and a parade of swaggering little swatches across the upper left-hand corner of the panorama. Another knockout is “Dandy Day,” done in 1976, not long before the artist died (in January 1977). It has a classic olive field in which the curved brush strokes are evident, while the waterfall of superimposed blips in contrasting colors are opaque, smooth-surface and with hard edges.

All of these images are vaguely reminiscent of natural forms without pushing them to any literal conclusions, but occasionally a title offers the mind a nudge, as in “June Lilac” (1972). This entrancing piece has a mottled bluish purple field upon which arches an opaque Kelly green stroke, and beneath it, an brownish green flower-like shape. But whether Bush meant to paint a flower, or was only reminded of a flower when it came time to title it, who knows—and who cares? What really matters is the wondrous way that the Kelly green & the brownish green interact with the purple (plus a couple of dabs of shocking pink).