THOMAS DOWNING AT YARES...WHAT A BEAUTIFL DAY IN THE NEIGHBORHOOD.... 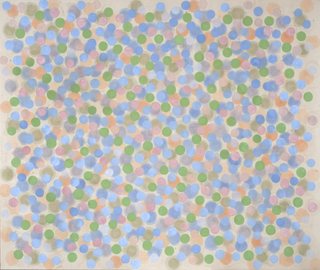 On July 1, at 2 am, I managed to hit my head so hard that it took 14 (or was it 16?) staples to close the scalp wound I’d incurred. Physically I seem to be recuperating nicely, but getting my head back together again in a figurative sense is proving harder. I do hope I am now up to giving you a report on “Thomas Downing: Spot On” at Yares Art at 745 Fifth Avenue (through August 6). This report will consist of

1) a passage introducing the artist & situating him in the context of the 1960s.
2) I will then transcribe the first of seven pages of notes I took when I visited the gallery on June 2.
3) I will then summarize the next 6 ½ pages, and
4) close with a description of the painting I reproduce and which is the last painting discussed at the end of Page Seven..

That should be enough to give you the general flavor of the show.

1)Thomas Downing (1928-1985) was a member of the Washington Color School (related to but not to be confused with color-field painting). According to the Yares Art press release, he was born in Suffolk, Va., and studied at the Pratt Institute in New York.

Louis and Noland then became associated with Helen Frankenthaler, Jules Olitski, Larry Poons, Friedel Dzubas & Jack Bush to become the founding members of what might be and probably has been called “the color-field school” or the “School of Greenberg.” As a lover of alliteration, I might propose “The Greenberg Galaxy.”

But back to the Washington Color School.

The best known of this group was Gene Davis. He is currently represented in “America’s Artistic Legacy: Part I” at Cavalier Galleries (through July 26). I have not yet seen this show but hope to do so next week. Meanwhile, I shall just say that among other painters associated with the Washington Color School are Sam Gilliam, Howard Mehring, Paul Reed, Alma Thomas & Kenneth Young


2) From my notes on Downing at Yares: “A most enjoyable show----- likeable ---- much more variety than I expected --- and many, maybe most likeable pix = the unfamiliar one [s?]

“Small dots, close together, lots of them (2” – 3” diameter)
“Least familiar – by and large
Most enjoyable ---
:Esp. when color range still limited

3) The next 6 pages of my notes discuss the placement of individual paintings & the paintings themselves. However, there had already been a sizeable turnover when I was there, so a number of the paintings on view were not listed in the original checklist

4) There may be more of these when you get there, and some of the works listed in my notes may no longer be on view, so I’ll just jump to the end of my notes, and give you what I wrote about the image I reproduce, which was and I hope still is hanging just to the right of the entry to the gallery, on the wall backing onto the lobby (elevator bank).