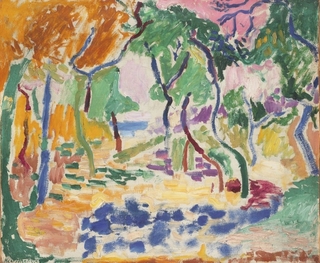 Henri Matisse (French, 1869-1954). Landscape near Collioure. 1905. Oil on canvas, 18 1/8 x 21 5/8 in. (46 x 54.9 cm). Statens Museum for Kunst, Copenhagen, gift of Johannes Rump, 1928. (c) 2012 Succession H. Matisse/Artists Rights Society (ARS), New York
The best museum show in town at the moment is at the Metropolitan Museum of Art, and it’s packing in the crowds. It’s “The Steins Collect: Matisse, Picasso, and the Parisian Avant-Garde,” and pays homage to four American siblings whose family fortunes were based in San Francisco, but who took up residence in Paris during the early years of the 20th century, and began collecting modern art with enthusiasm (through June 3). The first to arrive was Leo Stein (1872-1947), who came in early 1903, and was joined later that same year by his younger sister Gertrude (1874-1946). They moved into 27, rue de Fleurus, while their elder brother Michael (1865-1938) and his wife Sarah (1870-1953) arrived in January 1904 and subsequently set up housekeeping at 58, rue Madame. To show the extent of this remarkable family’s acquisitions, some 200 paintings, sculptures, and works on paper are on view, plus copious amounts of books, photographs & other memorabilia.

Primarily the works of art are by Matisse and Picasso, and include so many of those two great artists’ masterpieces that it boggles the mind to realize that they were all once owned by the same four people. However, the show is also rich in the work of predecessors like Manet, Renoir and Cézanne, contemporaries like Manguin and Gris, and younger artists who took their inspiration from the masters, like Max Weber and Morgan Russell. With the exception of one weird large group portrait of rubbery people by Marie Laurencin, and the rather pathetic mélange in the tenth & last gallery chronicling Gertrude’s admirations of the 1930s, there is hardly a loser in the lot. Even the student work displayed in the gallery devoted to the art school that Matisse set up between 1908 and 1911, with the aid of Sarah, is not without interest.

This magnificent show opened last summer at the San Francisco Museum of Modern Art, and appeared last fall at the Grand Palais in Paris. It was organized by curators from all three venues: Janet Bishop of SFMOMA, Cécile Debray of the Musée Nationale d’Art Moderne, Centre Pompidou, and Rebecca Rabinow and Gary Tinterow of the Met. Included in the presentation are huge blowups of old photographs showing how the art was installed in the Stein residences in Paris during the first two decades of the 20th century, plus film footage showing the house designed by Le Corbusier for Sarah and Michael in the later 1920s and snippets of “Four Saints in Three Acts,” the opera with music composed by Virgil Thomson and libretto by Gertrude (written 1927-28, first performed 1934). “The Steins Collect” is one of those rare occasions when I really felt that all this window-dressing served a purpose (particularly the photograph showing how Matisse’s “Bonheur de Vivre” was installed at 27, rue de Fleurus, since that painting is now owned by the Barnes Foundation, and it – as usual – seems to have declined to lend the original painting to this show).

The opening gallery displays works by impressionists and post-impressionists that were on display when Leo first arrived in Paris, and that he had seen, thereby shaping his taste. All of the larger examples were beyond his means, as none of the Steins were that wealthy. They could afford to buy Matisse and Picasso because these artists were still young and relatively unknown, with their prices correspondingly reasonable. By the 1920s, Matisse and Picasso were famous and their prices so high that none of the Steins could afford to continue buying them, although by that time the artists had grown to like them well enough so that they would give them small samples of their work, or otherwise arrange for them to acquire them. Not least of the reasons that the artists liked them so much was because the Steins didn’t keep their collections to themselves. Every Saturday evening, anybody with a recommendation was free to visit the two homes and see their splendors. In this way, the Steins not only paid for the work they bought with money, but also with spreading the artists’ renown.

Gertrude and Leo were the bolder pair: they bought the bigger and/or more controversial pieces, including Matisse’s famous “Woman with a Hat” from the 1905 Salon d’Automne, Matisse’s brutal “Blue Nude: Memory of Biskra” (1907), and (as mentioned earlier) the “Bonheur de Vivre” (1905-06). Gertrude especially related to Picasso, as witness his celebrated portrait of her (1905-06). Leo kept pace with Gertrude in his enthusiasm for Picasso throughout that artist’s Blue and Rose Periods: the show includes several especially large and memorable paintings from the Rose Period, most notably the “Boy Leading a Horse” (1905-06). However, as the artist ventured more and more into the esoteric realm of cubism, Gertrude became more and more fascinated and Leo, less and less. After 1913, the pair split up and divided their collection, with Gertrude taking the Picassos and Leo, the Renoirs (they both wanted the same small Cézanne). Gertrude remained in residence at 27, rue de Fleurus, now joined by her companion, Alice B.Toklas. The gallery in “The Steins Collect” devoted to Gertrude’s collection of Picassos there is a bit overwhelming, culminating as it does in “The Architect’s Table” (1912), a masterpiece of Analytic Cubism with her calling card as one image within it, and the hilarious collage entitled “Student with a Pipe” (1914).

Still, the unsung heroes in this show are Sarah and Michael (known as Sally and Mike to their intimates). Less flamboyantly esthetic than Leo and Gertrude, Michael was the responsible brother: he kept tabs on the family’s holdings back in San Francisco (and had to rush home with Sarah after the great earthquake of 1906, to protect them). He and Sarah respected but didn’t love Picasso; their great passion was Matisse, and anybody who shares that passion will be truly captivated by those galleries devoted to Sarah’s and Michael’s collection. The earliest, in particular, features a couple of walls full of those enchantingly modest still lifes and landscapes from the dawn of the 20th century, when Matisse was in his most lusciously fauvist moment. However, there are other, later paintings, too, that help to explain why Matisse considered Sarah the most “sensitive” one of the four Steins, as well as Matisse sculpture (early & late) and lithographs of odalisques from the 1920s. In the later 1930s, Michael and Sarah returned to San Francisco, bringing some of their Matisses with them, and in her old age, Sarah made those works available to young West Coast painters. In this way, both Richard Diebenkorn and Robert Motherwell could learn about Matisse first hand.