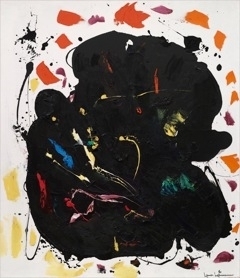 Hans Hofmann. Black Diamond. 1961. Oil on canvas, 60 x 52 inches (152.4 x 132 cm). Courtesy Ameringer-McEnery-Yohe.
Bursting with the tonic energy of spring, we have “Hans Hofmann: Art Like Life is Real,” at Ameringer-McEnery-Yohe in Chelsea (through April 21). Since 1983, I’ve seen many Hofmann shows at galleries representing his estate, this one & also its predecessor, André Emmerich. Rarely have these been more than low-key attempts to unload Hofmann’s semi-representational paintings of the 1930s, or minor works on paper, but this time -- hallelujah! --- we have a real live paintings show, occupying the main space of the gallery and not its little vermiform appendix gallery behind the receptionist’s desk. True, there are only 8 paintings on view, but they’re all good-sized works on canvas, from Hofmann’s most exciting, significant and almost completely abstract years (the 1940s through the 1960s); moreover, they represent a carefully-chosen cross-section of the kinds of work he was doing. (More paintings from these years are reproduced in the luxurious catalogue, with its essay by William Agee).

As Agee says, Hofmann has too often been left out of books & shows ostensibly devoted to abstract expressionism. True, he was well represented in the Jewish Museum’s “Action/Abstraction” of 2008, but MoMA has always shortchanged him, and accordingly his impact was vitiated in its “Abstract Expressionist New York” of two seasons ago. For one thing, I suppose, his age has told against him. Born the year before Picasso, he has always seemed “too old” to fit into the carefully chosen slot supposedly occupied by the heyday of ab-ex. (The fact that his art didn’t attain its maturity until that period is conveniently ignored.) Another problem may be that more than half his life was already spent by the time he emigrated to the U.S. in 1930 (de Kooning came at about the same time, but he was still young and unformed). This makes Hofmann to xenophobes seem more like a foreigner than an Amurrican. The final problem may be that Hofmann just isn’t gloomy enough to fit all the clichés about alienation and angst supposedly shared by all the other abstract expressionists (Pollock doesn’t fit them, either, but the fact that Pollock is so difficult to “understand” has led to angst and alienation among art critics and art historians attempting to “understand” him, which they therefore interpret as his qualities and not their own). Hofmann’s painting, on the other hand, is exuberant, even joyous, with its glorious colors and free-and-easy brushwork. It is just too happy to fit the mould.

I never know how I am going to react to a Hofmann painting (which may be a measure of his talent; he is full of surprises). I know that I almost always like his latest work, the paintings with the rectangles, but there is only one of that type here. It is “Candor” (1962), a brilliantly simple painting, with two upright rectangles (red & green) upon a field of rust. The tallest, most complex and splashiest painting on display is “Aquatic Garden” (1960). I know that Darby Bannard especially likes this painting, for he included it in the Hofmann show he curated, in 1976, for the Hirshhorn Museum and Sculpture Garden. It is a forest of spills and smears in radiant reds, flesh colors and medium blues, and (to the best of my recollection) there were a lot more like it in Bannard’s show..

I found two surprises in the current selection, two aspects of Hofmann’s art that I’d never fully appreciated before. The first was his use of thin, straight lines (in addition to his blocks, blobs & swirls of paint). When used to define a figure, as in “Seated Woman IV” (1944), these lines were a little irritating, but they worked to great advantage in “Composition #1” (1953). This painting has a blue rectangle, in the lower left-hand side of the canvas, a red rectangle at the center right, and a yellow oval at the top left --- all bound together by broad black or green boundaries, plus a network of very narrow & arrow-straight red, green and blue lines that overlie the broader forms and unify the composition.

The second thing I’d never responded to before was Hofmann’s powerful command of blacks. One knows all about his bright colors, but his blacks can have just as much – if not more – energy. Given the chance, in fact, they can almost explode. “Black Diamond” (1961), which reproduces well, has this huge central black blob, screaming to expand its perimeter, though neatly contained by dabs of red and yellow and so on inside of it & surrounding it. But the blacks in this show really reach their apogee with “Shapes in Black” (1944). Horizontal instead of vertical, and not all that big, it is more peaceable than “Black Diamond.” Still, its velvety night field of black has a way of almost glowing in the dark, with snatches of golds, rusts and blues shining through it.

I just came across this, great stuff. I think Hofmann's gotten better and better with each decade that's passed since the 1960s. I think he's underrated (pardon the expression) because he's hard to market--how can you market a great teacher, how can you market work that's just plain joyous about art and life, how can you market an artist who wasn't a "character"? I heard via friend Darryl Hughto about a panel coming up--Frank Stella, Bill Agee, Darby Bannard, Karen Wilkin. Is that in connection with the show? Will you be there? If so, please report. Cheers, Carl