FASHION & IMPRESSIONISM AT THE MET 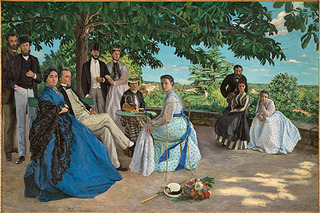 Jean-Frederic Bazille (French, 1841-1870). Family Reunion. 1867. Oil on canvas, 58 7/8 x 90 9/16 inches (152 x 230 cm). Musée d’Orsay, Paris. Acquired with the participation of Marc Bazille, brother of the artist, 1905.
Here is a show that I am the wrong critic for. It is “Impressionism, Fashion and Modernity” at the Metropolitan Museum of Art (through May 27). This show, which purports to offer “a revealing look at the role of fashion in the works of the Impressionists and their contemporaries,” includes some 80 major figure paintings, together with umpteen dozen period costumes, accessories, fashion plates, cartes de visite, photographs and popular prints, all dating from the mid-1860s to mid-1880s.

This show was organized by Susan Alyson Stein of the Met, in collaboration with Gloria Groom, of the Art Institute of Chicago, Guy Gogeval of the Musee d’Orsay and Musee de l’Orangerie, Paris, and Philippe Thiebaut, of the Musee d’Orsay. It has already been seen at the Musee d’Orsay, and, after its appearance in New York, will travel to the Art Institute of Chicago (June 26 to September 22).
.
Impressionism is a cash cow for the Met. For more years than I can remember, the museum gift shop has offered annual engagement calendars featuring impressionist work from its voluminous collection, and stationery likewise featuring such work. The repetitiousness of this offering makes me quite certain it sells very well (and the notecards, anyway, to me, though I normally choose the alternate calendars offered—the one that I have this year is “Art in New York.”). Any impressionist exhibition that the museum may offer is likewise well-attended, just as the galleries exhibiting impressionist work from the permanent collection are rarely empty.

Another cash cow that the Met has had a lot of success with is clothing. The museum has had a cordial, decades-long relationship with what in my childhood was called “the garment trade” or “Seventh Avenue” (and, although virtually no clothes are manufactured in the Big Apple any longer, the city still hosts a “Fashion Week” twice a year, at which name designers show off their latest styles). For most of these decades, exhibitions of high-style clothing were confined to the Met’s basement, where The Costume Institute was housed.

Then in 2001, with the exhibition of the wardrobe of Jacqueline Kennedy Onassis while she was in the White House, the fashion industry escaped from the basement and found a new home in the main part of the museum. People lined up to see this show. Attendance records were broken. What could be more natural than that fashion shows should become part & parcel of the museum’s regular exhibition schedule?

Thus, in “Impressionism, Fashion & Modernity,” we have an exhibition that combines two crowd-pleasers in one, like ice cream and cake at a birthday party. It ought to be tremendous fun, and I daresay for most of those attending, it is, but as I made my way through the galleries, my ability to stand back and appreciate these many magnificent paintings from a distance was continually hampered by big glass (or maybe plastic) cases in which stood dressmaker’s dummies in costumes resembling those in the adjacent pictures.

I might not mind if I were seriously interested in ladies’ fashions, but I’m not. True, I can get a kick out of shopping for myself, and buy clothes that (I hope) will make me look not too unlike the better-dressed women I see on the streets (or in other public places), but as a subject for study—or to write about—clothes have always seemed to me a superficial topic, as do the applied arts in general (with the exception of architecture). The fine arts, to me, are the ones with soul. Even when I was writing my “Swinging London” cover story for Time, and miniskirts and Carnaby Street were a central part of the story, I skipped incorporating into my draft any of the many pages of fashion notes telexed to us by our London bureau. My (male) senior editor had to insert them.

So—if your taste runs to actual clothing and paintings that are almost exclusively clothed figure studies (not nudes, landscapes, portraits or still lifes), you will undoubtedly get more pleasure out of this show more than I did. And you mustn’t allow yourself to be put off by the sizeable intrusion of more academic painters, most notably James Tissot, whose simpering little people are a true blight on the proceedings (there are 12 paintings by Tissot on the checklist, but only 8 by Monet and 9 by Manet). And you must be prepared to admit that even Monet, in the 1866 full-length portrait of Camille, his lover and later his wife, was as capable of a licked academic surface as was Tissot (no wonder that this particular Monet was greeted with such enthusiasm by the squares who saw it when it was exhibited at the Salon).

This sort of unevenness in quality is all too typical of exhibitions where the paintings are chosen upon the basis of subject matter, not style. But I must concede that it may be impossible to ruin any show with so many impressionist paintings, and you may well find this one a merry progress of joy. For me, only one and a half of the eight large galleries come off in their entirety, though a third is graced by nearly the best painting in the show, a small but perfect Cezanne, “The Promenade” (1871), and a fourth displays Cassatt’s formidable “In the Loge” (1878). And the one and a half are (mostly) formidable.

The half gallery is the sixth, devoted to men’s wear. Since gents in the later 19th century had only two types of outfits--daytime and evening, both cut very similarly—and because their colors were uniformly black (or maybe deep grey or brown), the organizers of the show had to eschew the superficial niceties of dress and find paintings with other ways of distinguishing them. They looked for novel poses, accessories and above all, faces—in other words, we get portraits of real people, not clothes horses.

And there are some excellent ones: Manet by Fantin-Latour (1867), “Portrait of a Man” (1880), by Caillebotte, a group of stockbrokers by Degas (1878-79), the haunting Whistler, “Arrangement in Black and Flesh Colour: Portrait of Theodore Duret” (1883), and an 1867 portrait of Renoir by Jean-Frederic Bazille, that promising young impressionist who was so sadly killed in the Franco-Prussian War. This was the successful half of the gallery. The other half is devoted to a large but pedestrian 1868 Tissot group portrait of mostly titled aristocrats who belonged to an elite men’s club. How insipid these snobs appear! The group portrait, to judge from this example, has come a long way – down – from the masterworks by Rembrandt and Hals.

The amazing gallery is the second, entitled “En Plein Air.” Here the ladies in all their fancy fashions are integrated into landscape settings, and the atmosphere comes alive with sunlight and dappled shade. Facing the entrance is the very large, brilliant two-part version of Monet’s “Luncheon on the Grass” (1865-66), with every crisp little pat of paint intact & distinct—no academic licked surface here. The same artist’s equally brilliant but slightly smaller “Women in the Garden” (1866) hangs off to the right, and on the same wall is Bazille’s idyllic “Family Reunion” (1867). Over on the left is an impish Renoir, “The Couple” (1868). Like big dolls, a young man and his lady friend stand in a sylvan setting. Their heads are a tiny bit too big for their bodies, but who cares? Romance is in the air. Finally, also on the left, is Courbet’s niftily salacious “Young Ladies on the Banks of the Seine” (1856-57). High fashion? Not exactly. These are working girls, seen in their professional dishabille. But a Grade A picture nonetheless.