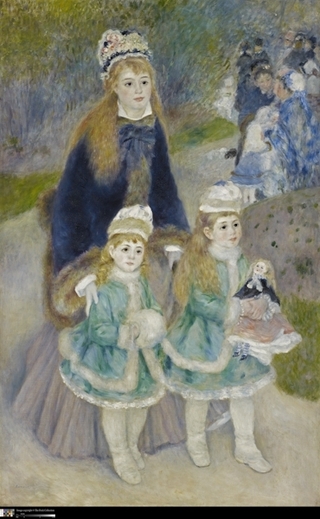 Pierre-Auguste Renoir (1841-1919). La Promenade, 1875-76. Oil on canvas, 67 x 42 5/8 inches. The Frick Collection, New York. Photo: Michael Bodycomb
Here is my second candidate for an overrated show. Which is not to say that a lot of it wasn't very fine. Just not all of it, and specifically not the part that everybody else elected to rave about.

The show I am talking about is “Renoir, Impressionism, and Full-Length Painting,” at The Frick Collection (through May 13). Organized by the Frick’s Colin B. Bailey, this exhibition presents nine large and rather formal (not to say pretentious) Renoir paintings, all showing full-length figures, standing, walking or dancing. They are displayed in the museum’s street level East Gallery, the first time it’s been used for a special exhibition. Not only do such large paintings need this full-scale space, but the museum must have expected that the crowds would make it doubly necessary, and indeed, the exhibition was being quite well attended on the day that I was there, even though it was before lunchtime and midweek (Wednesday). I went to the show with a couple of friends from out of town. They wanted to see Renoir. They LOVE Renoir. Doesn’t everybody?

Well, nearly everybody. Grinch-like, I relate only to early Renoir, the Renoir of “Le Pont des Arts, Paris” (1867). What a picture! And isn’t “Le Moulin de la Galette” (1876-77) a joy? “Nude in Sunlight” (1875-76, currently on view at the Met in “The Steins Collect”) is the most amazing nude I’ve ever seen, and even “The Luncheon of the Boating Party” (1881) is pretty good. However, already in 1881, Renoir is journeying to the south of France, then Venice, and his landscapes start to become soft and slushy, while the frankly salacious parade of nude bathers that begins in the late 1880s goes on and on, with its subjects getting more and more orange. As far as I’m concerned, the only art-lovers who can really relate to those late orange nudes are people who go for bad art in general.

To Colin Bailey’s credit, five of the nine paintings in this show date from the 1870s, before Renoir turned soft & decadent. Although the four are all figure studies, they are all very fine--distinguished by the deft, feathery brushwork that Renoir in his prime handled so well, the luscious colors that accompanied it, and the soft warmth in which he enveloped his female characters. The additional charm of “The Dancer” (1874) and “Acrobats at the Cirque Fernando” (1879) is that they mingle the allure of the world of entertainment with the sweetness of youth, while “La Promenade” (1875-76) is a wonderfully dramtic and perfectly delightful presentation to the viewer, on the part of an expensively-dressed young woman, of her two young & equally expensively-dressed daughters or proteges. The Frick is so lucky to own it.

I wish I could care as much about the last four paintings in the show. Three show a young couple dancing, and the fourth a rainy day in Paris with umbrellas dominating the scene, but they all date from the 1880s and, for me, they just don’t have it. The umbrellas in “The Umbrellas” (ca. 1881-85) have the heavy, slick outlines and greyish-white colors of the pavements and umbrellas in the famous, variously-titled rainy-day street scene by Gustave Caillebotte that hangs in the Art Institute of Chicago. The label to the Renoir “Umbrellas” says that by the time it was finished, the artist’s style had developed “into the more linear and muted handling associated with his ‘Ingres’ period.” For “Ingres,” read “academic.” Renoir seems to have fancied himself as a Salon painter (and never grew out of it, the way Monet did). Renoir only exhibited three times with the Impressionists, evidently being more desirous of getting attention from the sort of critics and exhibition-goers who patronized the Salons, and these last four pompous, stilted paintings are clearly designed to wow Salon audiences. Sorry to have to say so, but in this show they also got the lion’s share of the media’s attention in 21st century New York.

I had thought of Renoir as a wonderful painter of banal subjects because I had only known the genre works of plump ladies and decorous children. Then I attended a Colin Bailey talk and slide show on Renoir's seascapes and landscapes. Intrigued, I went to the Philadelphia Museum of Art's exhibit. It was wonderful. I appreciated the Frick exhibit because in my mind's eye I could recall the other work and marvel at Renoir's breath.

Yes, I would have loved to have seen that show. Unfortunately, it ran during the autumn of 2007, when I was still recuperating from major back surgery.