NOT THE USUAL SUSPECTS 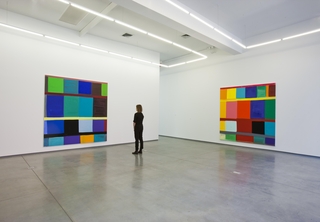 Installation shot, "Stanley Whitney: Left to Right," at Team Gallery (center & right-hand painting shown). Image courtesy of the artist and Team Gallery, New York
Although some readers may feel that this column’s reviews are exclusively concerned with what a onetime fan has referred to as “the usual suspects,” I do try to get around and see what else is going on. I’m not four people, as the New York Times is, so I can’t blanket the market the way they’re able to. On occasion, I’ve tried following the leads of one or two other websites, but so far, these have been disappointing. In the end, I find myself relying upon a range of leads, with mixed results. Sometimes a show has so little to recommend it that I don’t write about it, but below are 3 I decided to discuss, if only briefly:

1. On February 24, Roberta Smith ran a review of Ryan Sullivan at Maccarone (closed March 17) in the top slot of the NY Times’s weekly “Art in Review” column. In addition to this prominent position, which led me to believe that other people might also consider Sullivan a big deal, Smith panned the show in a way that led me to hope I might like it. Among other possible sources for Sullivan’s work, she cited Olitski; also, she said that it was “excessively refined” and “too calculated and fastidious.” I got down there (the West Village, way off the beaten track) to find 22 sizeable two-dimensional works made by a process that the press release described in detail. According to it, Sullivan lays his canvases horizontally, then adds “layers of latex, oil and enamel to create pooled pockets that slowly coagulate into unanticipated leathery skins and weighty flesh. Lifting the half-dry canvas, Sullivan subjects the paint to gravity, concurrently dumping out some underpainting while activating other layers beneath....The final application of spray paint deftly captures the contours of the morphing paint.”

Yes, but what did it all look like? I would say dried-up, desiccated Olitski. Also that oh-so desirable extreme of the messy-messy, like Jutta Koether in the Whitney Biennial. Sullivan’s colors mostly tended to be either muddy or bilious, and on the whole, the show was a triumph of technique over passion. Still, it wasn’t a total loss; it had some reasonably good-looking pieces. On my checklist, I find that I have given one star to four out of the 22 pieces on view, and 2 stars to another four. I even found one 3-star picture, prosaically entitled “December 19, 2011–December 26, 2011.” My notes on it read “Quite good, grays, blacks, ochers, balanced and strong. Classic comp[osition], reminds me of Rothko. In other words, not all that radical (despite the press release) but not as bad as Roberta considered it, either.

2. At a recent opening, two artists whose work I much respect both spoke with enthusiasm of “Stanley Whitney: Left to Right” at Team (closed April 28). This made it a show that I definitely wanted to visit, and, once I got there, I could easily see reasons for the enthusiasm: three large (8-foot square), brightly colored abstract oils on linen — admittedly geometric abstractions, but with a softness, warmth & luminosity pretty much lacking, for example, in the work of Andrew Masullo. All three canvases were similar in composition, with four rows of vertical rectangles, separated by three narrow horizontal bands of contrasting color, and (sometimes) additional horizontal bands of color at the top and/or bottom. The most distinctive, I thought, was the one in the center, which is mostly blues, greens and other darker colors, except for one yellow/orange half-rectangle off-centered in the bottom row.

All three paintings were very pretty, the colors were very lively, and as I say, there was an admirable willingness to take risks with scale. On the whole, this show was well worth a visit, but a few things about it dampened my response a bit. First, although the individual colors were very nice, they were also rather ordinary, straight from the paint-pot more often than not, nor were the color combinations, on the whole, unfamiliar or daring. Another characteristic that bothered me a little: one of the horizontal bands slanted up slightly, as though the artist hadn’t been able to draw a straight line, and one of the rectangles was so thinly painted that the underpaint showed through. Since it is, after all, not so difficult to draw a straight line, or to add a second layer of paint to cover up underpaint, I felt that what we were dealing with here was an artful amateurishness, which is in linguistic terms an oxymoron, and in human terms, something of a pose – a pose that is, I fear, not uncommon among artists eager to establish their relevance in today’s art world, which welcomes the mechanically perfect or the deliberately sloppy or messy, but discourages the well-made painting merely searching for a golden mean.

3. Howard Scott has me on his mailing list, though I only very occasionally write about his gallery. Most of his artists are abstract, but too minimal for me. However, his illustrated announcement for “Toon Kuijpers – Still Life: Dutch Heritage” (closed April 7) made me want to see that show. It turned out to consist of small, jewel-like oils of teacups, bowls, jugs and/or ceramic flasks, sometimes in groups but more often, with just one item alone. Scott’s reputation as a dealer in minimalist abstraction inclined one to see this show as a minimalist take on realism, and that’s one comparatively easy way to capture attention in today’s Chelsea, where Richard Serra rates Gagosian and words like “classic” or “traditional” are all too often seen as euphemisms for that dread adjective “modernist.” Still, I would argue that this show better deserved to be known as classic or traditional, in the best sense of those words.

Brushwork was painstaking, and colors – while faithful to their counterparts in nature – satisfying. As the show’s title indicated, the artist – a Dutch resident of Amsterdam – wanted to set up comparisons with his 17th century national heritage, but no contemporary artist at all familiar with art history can get back to that velvety darkness any longer. More recent masters have fundamentally altered the premises of still life, making it lighter and more loosely brushed. Thus Kuijpers was closer to Manet and Cézanne, though this is only an observation, not a complaint. The show reminds me in particular of Cezanne’s wondrously simple “Five Apples” (1875-6), currently on view in “The Steins Collect” at the Met, and owned by Mr. & Mrs. Eugene V. Thaw. (Mr. Thaw has a superb eye; I have yet to see a picture either owned by him, or having been donated by him to some fortunate museum, that doesn’t make me want to steal it right off the wall.)