RABBITS IN THE HAMPTONS 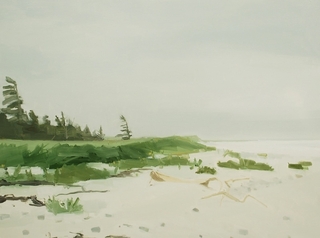 Out on the South Fork of Long Island, the art fairs are multiplying like rabbits. The oldest, which has been in business for five years, is ArtHamptons, which was held this year between July 12 & 15, showcased the wares of about 75 galleries, and featured a special party celebrating the 100th birthday of Jackson Pollock, the Hamptons’ most famous local talent. The newest art fair, Art Southampton, will be held for the first time from July 26-30th, and claims at its website that it will include about 50 galleries (so far, no listing of individual names). In between comes artMRKT: Hamptons, now in its second year, and taking place over the current weekend, from July 19 to 22. It’s the smallest, with only 41 galleries.

I didn’t get to ArtHamptons this year, but I did a few years ago, and found it pleasant, though hardly spectacular. Although in art world circles, the Hamptons are famous for the vanguard painters & sculptors who have lived there, the community as a whole is much more conservative, artistically (& politically – look at how eagerly it welcomed Mitt Romney, during his recent fund-raising visit there). In art, most Hamptons denizens seem to relate to Andrew Wyeth much more than less conventional practitioners. The result with ArtHamptons was that, although there were plenty of big-ticket items, most (if not all) of them came from earlier eras in art history, and/or represented less controversial forms of art.

Although I don’t know what periods of art will be found at Art Southampton, the images being flashed at its website include paintings by Friedel Dzubas and Helen Frankenthaler. This suggests that again the show will have heavy hitters from earlier generations. By contrast, the emphasis at artMRKT:Hamptons is much more on younger, still up-and-coming artists. Although it has a few uptown and/or well-known Chelsea galleries, the proportion of Lower East Side and other little-known galleries seems to be higher, and the oldest work of art that I spotted was a lone Romare Bearden collage from the early 70s (at DC Moore). Otherwise, I found myself most frequently confronted by 21st century work.

Prices, I imagine, are therefore more affordable & suitable for young collectors -- though again, nearly everything I saw was abstract painting, constructivist sculpture, representational painting, or romantic representational photography. I noted a couple of videos, a couple of deliberately tasteless photographs, and a few examples of the requisite assemblage, but on the whole this show steered clear of the sort of “challenging” art that its admirers have so lately taken to calling “relevant.” In its place – and not least among this fair’s attractions--- was representational art that fitted right into the Hamptons landscape, like “Tree & Beach,” by Sara Macculloch at Kathryn Markel Fine Arts.

Work at the booths of other galleries that I noted included an even larger, handsome figurative painting at Nancy Hoffman by Michael Gregory. Entitled “Olancha,” it depicted a good-sized shed or barn, painted with all the finicky detail of a hyperrealist picture of the 70s—but set in the midst of a loosely-brushed landscape that included a ripe brown field in the foreground and a misty vista of deeper blue hills rising to paler blue sky in the distance. Over at Allegra LaViola were two abstract paintings by Sandi Slone, one of which, the medium-large, horizontal blue “Worlds Apart,” I especially liked. I was told that this gallery will be giving Slone a show from September 5 to October 6. I can’t promise to rhapsodize about it, but I definitely want to see it.

However, the star booth in this galaxy was that of Gallery Sam. At its entrance hung a truly beautiful large pale painting by Roy Lerner entitled “Splendid Sun.” Predominantly a riffled blue, it also glistened with other pale colors & lots of gel & iridescence. Francine Tint was represented by the attractive “Tetra,” one of her medium-sized canvases--also with a light blue field, but with vertical & horizontal over-strokes of yellows, purples, greens, gold & pink. Joyce Weinstein contributed two of her lively “Country Field” series, both with a yellow keynote & rectilinear composition. Peter Reginato’s most striking work, the 5-foot-high “New York Report,” was displayed on the lawn outside the tents in which most of the show was staged. Predominantly ice-green, this stainless steel & enamel composition also carried touches of orange, yellow, blue & so on.

Most of the rest of Gallery Sam’s display was other abstract paintings, including some by Carl Gliko and that hardy perennial, Natvar Bhavsar, but a piquant note was added at the end by two large C-prints on metallic paper, showing two languid ladies, clad in tastefully draped gowns & reclining in a garden above a reflecting pond. They looked to me like 21st Century versions of Dante Gabriel Rossetti, and had been created by Daria Deshuk. She (it turns out) is local talent & has an artist son, Sam Deshuk Rivers, the fruit of her 10-year relationship in the 1980s with Larry Rivers.

Thanks Piri - I missed the show - your column gave me excellent coverage of the work I would have been seeking out in person.