VUILLARD AT THE JEWISH MUSEUM 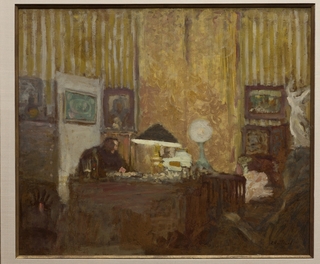 
Ever since I was in graduate school, I’ve known that Edouard Vuillard (1868-1940) was a member of Les Nabis (Hebrew and Arabic for “prophets”), that group of avant-garde painters in the 1890s who took as their point of departure the “synthetism” of Paul Gauguin. I also knew that they’d been further influenced by Art Nouveau and Japanese prints, and that their manner of painting employed simplified outlines and flat, clear colors to achieve emotive and decorative compositions. Finally -- for almost as long --- I’ve been under the impression that Vuillard’s late work degenerated into pathetically bad carbon copies of his earlier triumphs. Therefore, I was delighted to find that my impression regarding his later work was almost entirely unjustified when I attended “Edouard Vuillard: A Painter and His Muses, 1890-1940,” at The Jewish Museum (through September 23).

Organized by Stephen Brown, assistant curator at the museum, in consultation with Norman Kleeblatt, chief curator, this charming & exceptionally well-chosen show of more than 50 paintings (plus prints, photographs and memorabilia) isn’t as comprehensive as the huge Vuillard retrospective that played Paris & Washington in 2003, while bypassing New York. However, this show tells what may well be a more intriguing & illuminating story -- of the painter’s relationships with the three women who became in succession his inspiration.

Vuillard was the classic mama’s boy. He lived with his mother, born Marie Michaud, until she died in 1928, in her late 80s. He was 60 when that happened, nor did he then or ever marry, preferring what a psychiatrist today might call unavailable women. Still, he chose exceptional ones. First, in the 1890s, came Misia Godebska Natanson, wife of one of three brothers who published La Revue Blanche, an important cultural and political magazine. Many men in its milieu fell in love with Misia – so many, in fact, that one concludes with Vuillard (& probably most if not all of the others), these were what we used call purely Platonic relationships.

After La Revue Blanche closed in 1903, and Misia separated from her husband, Vuillard moved on to become an admirer and subsequently lover of Lucy Hessel, wife of one of the managers of Bernheim-Jeune, a gallery which the artist had joined in 1900, and which was one of the most prestigious venues for modern art at that time. The Hessels, too, were the center of a lively social circle, and gradually became a second family for Vuillard, inviting him to their country homes in the summers as well as their Paris establishment in winter.

The exhibition at The Jewish Museum follows this sequence, with the smallish opening gallery devoted to work reflecting the artist’s home life with his mother and his sister Marie (who would marry a fellow Nabi, K. X. Roussel, in 1893). Next comes a larger gallery focusing on La Revue Blanche and Misia. In both these galleries are delicious paintings, mostly small, in the post-impressionist Nabi style. They typically depict modest little domestic scenes of figures in interiors, often distinguished by subdued lights and shades, grays, browns, rich mustard colors, and tiny, delicate patterns on fabrics and wallpaper. One of the most effervescent, depicting Thadée Natanson, Misia's husband, at his desk, was lent to this exhibition by Helen Frankenthaler, prior to her death (major loan exhibitions can take months and even years to organize).

These interiors, with their not only subdued but also flat colors, and their cut-out shapes, further attest to the artist’s interest in fabric and design that reflects his closeness to his mother ( who after his father died, had become a seamstress to support the family). They are also good examples of what made the Nabis such trailblazers in the 1890s, and the kind of Vuillard that most of his admirers are familiar with. They are only, however, a limited part of this show.

Its third, fifth and sixth galleries are devoted to the less familiar, later paintings of the artist’s “Lucy” period. The expansive, octagonal fourth gallery is the exception. It displays six of Vuillard’s outsized decorative panels, depicting street scenes more often than interiors; although they, too, date from the early 20th century, at least four of them, the tall narrow ones, are well known.. They also still echo the flatter & more decorative style that Vuillard had used in the 1890s, though they have a mostly paler palette and a slightly cuter set of images.

In other paintings in this latter part of the show, one can see Vuillard’s style evolving backwards, so to speak, from post-impressionism to something more like impressionism. Still, he was skillful at this new/old style & it served his purpose well. I was especially surprised (& enchanted) by the fifth gallery of the exhibition, hung with 9 later portraits, dating from ca. 1909 to 1939, the year before the artist’s death. Many of these paintings are large, and two portray more than a single figure. All are marked by rich color & virtuoso brushwork, employed to depict not only human subjects, but also every detail of their affluent surroundings — the most comical being the cord snaking out from the telephone on the table into the foreground of the picture portraying Henri and Marcel Kapferer in their dining room (1912). Clearly, in 1912 a telephone (however unlovely) was the last word in modernity and luxury.

It’s a tad strange to see this 19th century painting style used to depict people in 20th century couture & coiffures. At least the brushwork is painterly and not the corny “licked” academic style of so many more recent oil portraits, including those of children & their mothers that I saw when I was in high school and visiting the Park Avenue apartments of my Dalton classmates, not to mention all those of college presidents I’ve noted over the years in university libraries & those of business executives seen in offices. If nothing else, these early 20th century portraits by Vuillard supply the missing link in a tradition that descends from the great 19th century portraits (by Ingres, Manet, Degas) to those insipid later 20th century ones.

The sixth, and final, gallery of the show at The Jewish Museum, through a combination of paintings & memorabilia, primarily deals with the Chateau des Clayes, the Hessels’ country estate. Among the paintings are several evocative landscapes, too.

Confronted with all this evidence of a perfectly presentable (if not exactly radical) later career for Vuillard, I asked myself, how could I ever have been under the impression that his work degenerated in his old age into pale carbon copies of his earlier, better and best-known work? Well, I believe that I’ve reconstructed the relevant experience, and now understand why my current impression of the late Vuillard differs so from the earlier one.

For starters, I knew that my earlier impression came originally from an exhibition I’d seen at the Grand Palais in Paris, long ago. Thinking this over, I concluded that this exhibition must have been the one that I’d wandered into in the spring of 1983, right after having attended the great Manet exhibition that was also in the Grand Palais at that time. Detective work on the web told me that the show I must have seen was a group exhibition sponsored by the Société des Artistes Français, an organization of artists formed in 1881 to stage the annual Salons which had been staged by the French Academy (the government having withdrawn from official sponsorship of the Salons). This 1983 group exhibition may have been part of the Société’s annual Salon, though that’s not entirely clear from the info on the Web.

What is clear is that it was held from May 2 to 23, 1983, at the Grand Palais, and included four of the original Nabis (Bonnard, Roussel, Vuillard & Maillol), plus three artists of the next generation, all born in the 1890s (Paul Belmondo, Jaro Hilbert & Maurice Ehlinger). None of these last three ever came to anything, but judging as best I could from the meager information about them on the Web (including images at google), these artists were uniformly awful – tired, pathetic, & grossly academic (in the very worst sense of the word). I suppose the hope of the show’s organizers was that the luster of the earlier generation might rub off on the later one, but what must have happened with me instead was that the awfulness of the later painters tarnished my image of the earlier ones. Let that be a warning to all artists offered the chance to participate in what promises to be a truly awful group show: beware of the company you keep, or you may suffer from guilt by association!

Also, though, I think that my own perspective must have altered through the years, and that I am now more receptive to lesser art than I was, 30 years ago (believe it or not). I think I must have seen at least some of the later Vuillards in that 1983 exhibition that are also in the current exhibition, particularly those four large, tall & narrow decorative panels, and I also think I must have judged them more harshly than I do today. Then again, I don’t think I’m the only modernist whose standards have been beaten down by the overall lowering of standards in the art world as a whole. I think of the recent John Chamberlain retrospective, reaping praise from people who would have condemned it 30 years ago, and of the tendency to discover previously unsuspected virtues in Ellsworth Kelly...then again, even Greenberg never set up absolute standards--he merely believed in supporting & encouraging the “best” art of our time, regardless of how inferior it might be to the best art of another era.