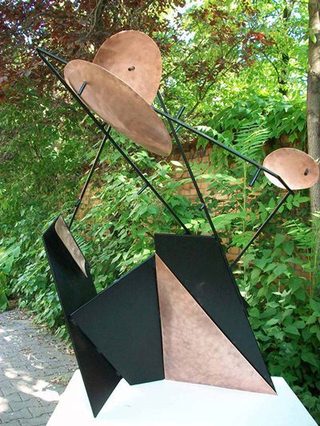 One of the most enjoyable shows on view in Manhattan at the moment is “William Tucker: Present and Past” at McKee (through October 13). The literature from the gallery emphasizes “Day” (2012), an 8-foot high, semi-abstract, terracotta-colored plaster horse’s head (destined, the artist hopes, to be cast in bronze). Pictured on the invitation, it summons up memories of the head of a horse of Helios, rising to create the day on the east pediment of the Parthenon in the Elgin Marbles at the British Museum.

“Day” is more representative of the bronze sculptures that Tucker (b. 1935) has made since 1978, when he immigrated to the US from the UK, and began a distinguished teaching career, at Columbia University, the New York Studio School, and, most recently, Bard (where he is currently a professor emeritus). And as a teacher, his influence has also (I should hope) extended far beyond his own classrooms, at least if his 1974 book, known in the UK as “The Language of Sculpture” and in the US as “Early Modern Sculpture” has been as inspiring to other teachers as it has been to me.

However, I would say that the real thrill of the show at McKee is four wonderfully simple, graceful but powerful, completely abstract, and equally sizeable surrounding sculptures, one of steel and three of wood. All date from the 1970s, while Tucker was still resident in the UK and known as one of the most promising younger sculptors who had studied with Anthony Caro at St. Martin’s College of Art and Design in the 1960s. Together with Caro, they had wrested leadership of the British school of sculpture away from its previous leader, Henry Moore.

The earliest of these four, an untitled piece from 1972-1974, is made of pine, painted white, nearly 8 feet tall and nearly 12 feet long. It is composed of a right triangle of beams (2 x 4s??), with the base running along the floor and set off by two small, triangular pieces of wood—very nice, very neat, very composed (in the sense of feeling and seeming comfortable with one’s space and one’s place in the world).

Next comes “The Trap” (1975-76), a rectangular piece of steel tubing, 5 feet high and more than 8 feet broad, with the top half rising and folding back over the bottom half so that the impression is created of a large steel mouth opening to receive minnows. The patina is dark brown; the illusion of teeth is perhaps suggested by the many short lengths of tubing jutting out at right angles from the large, elementary shape of the central piece of tube.

Both of the two later pieces represent further excursions into triangles. “House” (1975) is a scalene triangle made of oak, stained a deep brown, and pock-marked with drilled round holes, some of them recessed into small carved-out squares. It’s about 16 feet long, nearly 8 feet high and its base tilts up slightly to one side—sort of a cute idea, but maybe a little fussy – or is baroque the word I want?

Finally we have “The Contract” (1978), another right triangle in pine, but stained brown this time instead of painted white. It’s about the same size as the others (nearly 9 feet tall and about 8 feet wide). It’s also more elaborate, with the vertical and horizontal beams extending beyond the hypotenuse of the triangle, and lots of little pieces of wood jutting out from its sides like rungs on a ladder. All four of these earlier sculptures are exceptionally handsome, and well worth the trek up Fifth Avenue to Fifty-Seventh Street, though if push comes to shove, I must admit that I liked the earlier two a tiny bit better.

Nor is it only New York that is getting a chance to see such work. Anybody attending Basel Miami this year can see these or similar works, for there will be an exhibition of six Tucker sculptures from the 1970s at The Margulies Collection at the Warehouse in Miami at that time.

David Evison (b. 1944), is also a sculptor who studied at St. Martin’s in the 60s, while Caro was there. He is of a later vintage than Tucker, & continues to find it rewarding to explore the modernist tradition as originally established by Picasso, Julio Gonzalez, and David Smith.

Though Evison’s parents were Brits, they were missionaries, so the future sculptor was born in China and has many times returned there—in recent years, even maintaining a studio in Beijing to which he commuted from his home in Berlin. Evison, too, has taught in many places, including the UK, the US, and Australia; most recently, and for 30 years, he was at the Hochschule der Künste in Berlin. He has also exhibited internationally; his current show,“Common Ground?” is at Galleri Heike Arndt in Berlin (through October 21).

“Common Ground?” is a joint endeavor, with Evison’s co-star Marian Heyerdahl, daughter of the Norwegian adventurer. The two artists worked together in the same compound in Beijing until 2009, but this joint Chinese experience has led to very different outcomes.

Heyerdahl has created massive terracotta figures closely based on the famous Chinese tomb sculptures of warriors--the switch being that Heyerdahl’s warriors are all women. Evison shows a selection of recent work: two medium-sized steel and copper sculptures from his crisp and engaging “M” series, some ceramic reliefs, drawings and a 40-inch high steel-and-copper model for what he visualizes as a 15-foot high sculpture.

He was particularly eager to have the public see the model, but this exhibition is only a part of his peripatetic autumn. According to an email that he sent me August 25, he was leaving Berlin shortly after the opening of his show at Arndt in September to go to Wuhan, China, where he would teach a sculptural version of Chinese calligraphy to a class of 40 students at the Hubei Art Academy (as well as making sculpture of his own on the side).

On October 20 he planned to return to Berlin, pick up the model exhibited at Heike Arndt, and on November 20th return to China, this time to the city of Hangzhou, where, with another German professor and a Chinese painter, he would be exhibiting sculpture made in Beijing at the China Academy of Art Museum. He also expected that the model would be translated into its permanent (15-foot high) form at the Sunhoo Design Center in Hangzhou.

The model, a skinny, vertical object combining stick-like forms with rounded ones, looks promising from the emails Evison has sent me. I look forward to seeing a picture of the finished sculpture (as I’m not likely to get to Hangzhou any time soon). Evison describes the piece as an abstract inspired by the bronze bird/deer from the Marquis Yi tomb, created in the 5th century BC, and now in the Hubei museum in Wuhan.

This hybrid is an imaginary creature, a chimera believed to have special properties when it was made; today, for the same reason, it may appear to some observers as faintly ridiculous. To Evison it is “a great and beautiful work of art which I appreciate mainly for its formal values….the persons who made it were clearly trying to find the right proportions, form and profiles as well, formal values. Today we can call it a sculpture: high art to rival that of Egypt and Greece.”

FROM THE SUBLIME, TO THE FAINTLY RIDICULOUS…

….I give you “Gerhard Richter: ‘Painting 2012” at Marian Goodman, on Fifty-Seventh Street right around the corner from McKee (through October 13). At 80, Richter is the current reigning god of German pomonian painting (whatever happened to Anselm Kiefer, who back in the 80s enjoyed similar acclaim? Come to think of it, whatever happened to all the other neo-expressionists who were so “hot” in that same decade? They’re yesterday’s newspapers now).

Given Richter’s present eminence, it was only natural that Peter Schjeldahl should discuss him & his show in the New Yorker. To be sure, Schjeldahl employed the ambivalent approach that seems to be the latest style in critical circles these days (“New and decidedly novel digital prints by Gerhard Richter…delight my eyes, tire my brain, and numb my heart…I like and don’t like the work. This, I reckon, puts me right where Richter wants me.”)

However, you can usually tell how important a critic thinks an artist is by the amount of space devoted to him. In this case, Schjeldahl went on for 1 and 2/3 pages, including a quarter-page, full color reproduction of one of the “strip” paintings featured in this exhibit. That’s what we on Time, in the old days, would have called “a major takeout.”

Karen Rosenberg was a little more negative than fashion demands in the New York Times, calling the show “Richter-manqué,” and saying that it pursued “Conceptual painting, a category he practically invented, to logical but deeply unsatisfying ends.” But this, too, was a sizeable (400-word) review, and, considering that every week, the Times has a choice of hundreds of shows to review, the tiny handful that do get reviewed at all are by definition “special.”

Neither critic thought it advisable to point out that Richter’s “strip paintings” are really rip-offs (or should I say "appropriations"?)of the “stripe paintings” of Kenneth Noland, exhibited most memorably at André Emmerich in the fall of 1967. It took Peter Reginato to point out the similarity on Facebook (on October 3).

Even he didn’t remark on how inferior to Noland the Richters were until his second commentary on the show (on October 4). But these Richters are really very poor imitations of Noland, with hundreds of horizontal stripes much too narrow to be able to convey any warmth or personality—or any color worthy of being called color. "Slick" and "shallow" are words for these pictures that come to mind. At best, they’re more like op than color-field painting, and by me that’s no compliment.

Noland thought of his stripe paintings as resembling musical compositions; he composed his color combinations. Richter’s color combinations, in the now-hoary tradition of dada, are left to chance. Even with a naked eye, one can see the difference.

Actually, the Richters aren’t really paintings, they’re digital prints, with a flat, shiny, mechanical surface instead of the very human & deeply moving surface of a Noland. The Goodman Gallery’s press release makes much of the fact that it is displaying very specially-concocted digital prints; its writing combines a peck of technological hoo-ha with a pint of art-historical twaddle.

ACTUALLY, IF YOU WANT TO SEE SOME REAL PAINTING…

….you might consider moving on up to 58th Street, and paying a call on “Summer Selections” at Spanierman (through October 6). I have dilly-dallied with reviewing this show because I already reviewed the first of this gallery’s two summer group shows, and, for that same reason, I’m not going to go into detail about this one. I will just say there’s a lot to like here, at any rate if you’re the sort of person who goes for art, as opposed to fashion, for the performers here are all hardy perennials, not just fly-by-night annuals.