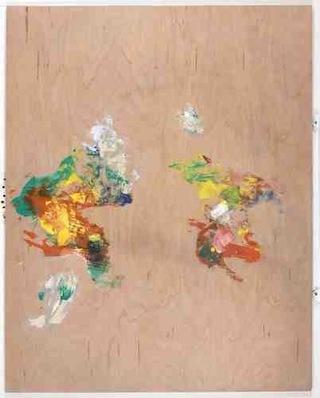 George Hofmann. Codex Major 5. 2012. Acrylic on birch board, 48 x 38 inches.
For years, Arthur Yanoff, the painter/collagist, has been telling me about George Hofmann’s theory on “fractured space.” According to Yanoff, this is the coming form of painting in the era of cyberspace. For that reason (among others), I was more than ordinarily curious to see Hofmann’s latest work in "George Hofmann," at Show Room, on the Lower East Side (through October 7)

Thoughtfully, the Show Room press release quotes from an essay by Hofmann on “fractured space” posted in 2010 in a blog by Paul Corio, one of Hofmann’s former students at Hunter College. The quote runs as follows:

“The world is awash in visual information; unedited and torrential, pixelated, flickering, backlit, and instantaneous. The space we’ve known in painting is giving way to that which hints at depth, subtly suggesting it, opening pictures and giving us surfaces that invite us in. For those thinking about it, it’s exhilarating, and exciting to imagine the possibilities open to us.”

One can certainly see what Hofmann is talking about in the 3 paintings from 2011 and the 5 from 2012 on view in this exhibition. A secondary exhibit, of 5 small works on paper from the 60s and the 70s, was too pure for me. I like my art works more robust, but found myself at least partially satisfied in that respect by the 3 from 2011-- part of Hofmann’s delicate and modestly-scaled “Duccio Fragment” series-- and wholly satisfied by the 5 from this year--part of his larger & more striking but still elegantly melodious “Codex Major” series.

All 8 of these paintings are listed as acrylic on birch board. “Birch board” I take to be the technical term for what I in my youth was taught to call “plywood.” Its suave pale brown patterns of arching wood grain offer a large & expansive, complementary pattern to that provided by the relatively small and dancing, feather-light dabs & smears of brightly-colored paint laid onto it in its central registers.

Especially in reproduction, one can see the space of these paintings “giving way to that which hints at depth.” The acrylic paint floats above the surface of the birch board as though far above it, opening out space between the image and its ground in a way not unlike the way that an icon will float above the surface of a computer desktop.

There, however, for me the resemblance ends, as the computer is a lifeless, mechanical object whereas Hofmann’s paintings live and breathe with the life that he has instilled into them. Nor does this fine show fulfill the further stipulation (in part of Hofmann’s essay not quoted in the press release) that “fractured space” should offer “a somewhat disjointed distribution of pictorial elements…” These paintings are no more disjointed than any others, and less so than most, praises be.

The three strongest paintings in the “Codex Major” series are Numbers 1, 5 and 2—very correctly hung next to each other on the back wall of the gallery, where they are first to greet the eye of the entering visitor. No. 1 has a heavenly blue/green schmear on the right-hand side of the panel, balanced by a mass of red, blue and yellow at the left.

No. 2 has a descending form of green and yellow, coming from the upper left, to be matched by a red/blue area in the lower right. No. 5, in the center of the wall, has two facing and similar (but far from identical) images with all these splendid colors (plus a few free-floating splashes of white). The painting reminds me of a Rorschach blot made by folding a freshly-inked piece of paper in half, but at the same time, it has an airy, otherworldly quality all its own—with a subtle counterpoint of acid.