THE TRIUMPH OF ART OVER TIME: BERNINI AT THE MET 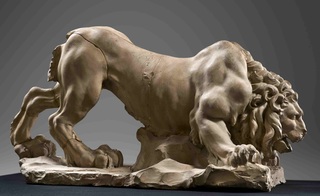 Gian Lorenzo Bernini (Italian, Naples 1598-1680 Rome). Model for the Lion on the Four Rivers Fountain. Italian (Rome), 1649-50. Terracotta. 12 5/8 x 23 1/4 x 12 5/8 in. (32 x 59 x 32 cm.) Accademia Nazionale di San Luca, Rome, 258.
The triumph of art over the ravages of time is the theme of the wondrous exhibition of “Bernini: Sculpting in Clay” at the Metropolitan Museum of Art (through January 6; thereafter at the Kimbell Art Museum, Fort Worth, February 3 through April 14). The centerpiece of this show, and its reason for being, are the 34 bozzetti, or small terracotta preliminary or sketch models, made by Gian Lorenzo Bernini (1598-1680), one of the great geniuses of the baroque, in preparation for his full-size bronze or marble statues or larger sculptural & architectural projects.

To place these sketches in their proper context, the show has been fleshed out with 30 related drawings, a few bozzetti by Bernini studio assistants, a few modestly-scaled finished sculptures in bronze or marble to show what the sketches were used for, and many very large photographs to show other finished sculptures and larger sculptural & architectural projects.

It’s a very ambitious show, attempting to summarize many aspects of Bernini in a nutshell, and was organized by four curators: Ian Wardropper, director of the Frick Collection (guest curator); Anthony Sigel, conservator of objects and sculpture, Harvard Art Museums (guest curator); C.D. Dickerson, curator of European art at the Kimbell; and Paola D’Agostino, senior research associate at the Met.

However, the essence of the show remains the bozzetti, and truly, they are evidence of both craft and vision. I come at this show from two previous experiences (neither recent). The first was a week-long segment on Bernini that I taught at Columbia University from 1978 to 1980 as part of an undergraduate art humanities courses (this job was for graduate students to help them support themselves while they were working on their dissertations; we were called “preceptors”).

The second experience was teaching an introductory ceramics course at Bethany College from 1990 to 1994. This was a studio course, not art history, and since I hadn't worked in clay since high school, I prepared for teaching it by taking an introductory ceramics course myself. The second experience enables me to appreciate the craft involved; the first may (or may not) be what helps me to appreciate the vision.

All told, I had about 65 students in those ceramics classes, but only two stand out in my memory. The first was a senior or perhaps a grad student—anyway, he didn’t need the credits involved in order to graduate, he just wanted the experience, and he was a joy to teach. I really didn’t have to do any teaching—he took to the wheel like he already knew all about it, and produced pots and bowls larger and more perfect than any I’d made.

Moreover, his taste in glazes was impeccable—he glazed all his creations, and the color combinations he chose were sophisticated and inevitable. If you’ve ever glazed a piece of terracotta (this being the name for a clay piece which has been fired once), you know this is quite an accomplishment, for the color of the glaze, when you paint it on the terracotta, will change radically when the object undergoes its second firing.

The other student who stands out in my memory cut class for most of the course. Then he suddenly showed up, two weeks before the end of the semester, and made a huge head out of clay. In his extracurricular moments, he was a magician, especially talented at sleight of hand, and this skill with his fingers enabled him to build his creation to a previously unimaginable height, and to incorporate into it all kinds of ultra-realistic detail. I had to give him a good grade on the basis of this accomplishment, but privately I found his image a real turnoff from an esthetic point of view – overdone, kitschy & irritating.

What a difference there was in these bozzetti at the Met! Here was a master who combined the skill of my youthful prestidigitator with the taste of my grad student! But of course, Bernini’s creations don’t have the somewhat classical balance of the grad student from Bethany; rather, he epitomizes the spirit of the baroque, which (as Heinrich Wölfflin first pointed out) decentralizes the image, emphasizes diagonals rather than classic balance, and creates motion instead of stasis.

Draperies (profusely rendered) flutter, as in Bernini’s “Model of Saint Longinus”(ca. 1634). In the model for “Charity with Four Children” (1627-34), the lovely details are just roughed out, with areas still showing how the clay has been treated with tools and fingers. The exciting freedom of this bozzetto is lacking in the finished sculpture, which became part of the tomb of the pope Urban VIII, and is visible in the large accompanying photograph.

The “Model for the Nile” (ca. 1650), one of the four personifications of rivers to be incorporated in Bernini’s unforgettable Fountain of the Four Rivers, is simple & direct, with the sway of the body complimented by the swirl of drapery over the head (this being a symbol for the fact that, when the sculpture was made, the source of the river was as yet unknown in Europe). The “Head of St. Jerome” derives its motion from beard and hair as curly and frothy as drapery.

Teaching Bernini at Columbia (for which I was well prepared by graduate-level professors) taught me to appreciate and respond to the strengths and rationale of the baroque. It also gave me an overview of Bernini’s accomplishments, so that I could see that the Met’s show doesn’t include bozzetti for all of the artist’s sculptures, or even all his most famous ones. What my schooling lacked was the immediacy and freshness of this show, and not just because all we had to look at in Columbia was slides.

At Columbia, we looked at the finished sculptures. They seemed to fit the baroque paradigm well enough, but the sculpture in all the photographs on the walls at the Met lacked the verve of the terracotta models, whether or not the finished work had been made by Bernini or one of his assistants. What is that old line about how one may never be able to recapture that first fine careless rapture? I was perfectly satisfied with the finished work by Bernini when I saw it in slides at Columbia, but at the Met it looked stiff and formal by comparison with the bozzetti.

This kind of thing makes one wonder how much of any artist’s original vision has been left to us. Many, maybe most of the bozzetti at the Met are in poor condition, with feet, hands, drapery and/or heads missing. One of the most enjoyable pieces, the “Model for the Lion on the Four Rivers Fountain” (1650) is a noble beast, richly suggestive of menace, but with body seemingly patched together, bits of the mane and most of the tail missing.

The wall text would like to suggest that these wonderful little pieces have been treasured down through the centuries. To me it looks as though most had been stored for decades and even centuries in attics because it was generally thought that they were worth next to nothing. Through the mercies of a few kind souls, these few seem to have been preserved, but many others like them must have been destroyed.

Only since the late 19th century, with the advent of impressionism, and the new prestige accorded paintings created sur le motif, have we really learned to appreciate sketches & studies. Verily, yesterday’s refuse may become tomorrow’s discovery—so be careful when you’re next cleaning out your basement.