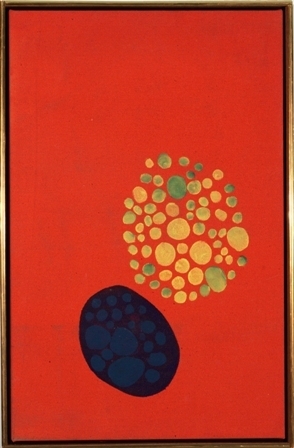 Jules Olitski. Shaker. 1961. Magna acrylic on canvas, 25 x 16 inches. Courtesy The Olitski Family Estate and Freedman Art.
For the last year and a half, my art world friends on Facebook have been telling me about & attempting to show me the joys of “Revelation: Major Paintings by Jules Olitski.” This exhibition of 32 paintings from 1960 to 2005 was, according to its luxurious catalogue, originally co-organized by Barbara O’Brien and Rachel Blackburn Cozad, respectively chief curator and director of the Kemper Museum of Contemporary Art in Kansas City (though the catalogue also contains essays from the show’s curators: E. A. Carmean, Jr., Alison de Lima Greene and Karen Wilkin).

“Revelation” premiered at the Kemper from May through August 2011, and tiny installation images of it appeared online, if memory serves correctly, not only from its showing there but also from its appearances at the Museum of Fine Arts, Houston, where it was on view from February to May 2012, and the Toledo Museum of Art, where it was on view from May through August 2012. Now, at long last, “Revelation” has arrived at a venue where it is convenient for me to go see it: the American University Museum in that institution’s Katzen Arts Center, where it opened in September and will remain on view until December 16.

Moreover, in DC is also another exhibition of the same master’s work: “Jules Olitski on an Intimate Scale,” at the Luther W. Brady Art Gallery in the Media and Public Affairs Building of George Washington University. This show, co-organized by Lauren Olitski Poster, daughter of the artist, and Lenore D. Miller, director of the Brady, features 36 small paintings, from 1961 to 2007 (the years of the artist’s death). “Intimate Scale” also opened in September and will remain on view until December 14; its neat little illustrated catalogue features an essay by Carmean

Both exhibitions contain splendid examples of work from the five periods of Olitski’s mature work: the “stain paintings” of the early 60s, the “spray paintings” of the later 60s, the “baroque” paintings of the 70s, the “high baroque” paintings of the 80s and early 90s, and finally the “orbs” of the artist’s last period, from the mid-90s onwards. Although Olitski has also made representational work, these two exhibitions are all abstract. That’s fine by me, as I feel that his abstracts represent his surest claim to immortality.

It might have been nice to see a few pictures from his earliest (Paris) period, the rough-surfaced paintings like the one in Loretta Howard’s “The Lure of Paris.” When these (or others like them) were exhibited in the late 50s at the Iolas Gallery in New York, they prompted Clement Greenberg to place his signature in the guest book, which in turn led to the momentous meeting between the two men. Still, if any of this early work had been included, somebody might have felt obligated to include as well the transitional work from the late 50s up to about 1960, and that transitional work (as seen at Freedman Art a year or so ago) was not the artist’s best. Anyway, there is more than enough to pleasure the eye here.

In its original format, “Revelation” must have been a stunning exhibition. At American University, it is still an extremely handsome one. Since its origins, it has lost nine of its original 32 painting and gained three, so that in all 26 are displayed. I would like to have seen the monumental “High A Yellow” (1967; Whitney Museum of American Art), and the even more monumental “Blue Screeve” (1968; private collection). On the other hand, the National Gallery’s tall, narrow “Unlocked” (1966) is a worthy addition. And most of the finest paintings from the original show are still here, although not always displayed by the Katzen's gallery's somewhat awkward layout to best advantage.

Among the finest works in the show are the crisp & vigorously contrasted “Candy for Lovers” (1960), with its bright ovals against a black field, the deeply sprayed greens and purples of “Exact Origins” (1966), the monochromatically blackish Sienna washed down in thinned sweeps of paint to become “Hyksos Factor III” (1975), and finally, the large & truly magical “Lives of Angels”(1990), with its succulently swabbed loops of silvery brownish-gold iridescence. In fact, for me “Lives of Angels” is the peak accomplishment of this show, a luscious and impregnable accomplishment of sheer genius.

Among late works, I thought “With Love and Disregard: Silence” (2002) was the best, but I’m afraid I still haven’t learned to love any of the work from this period the way I’m supposed to. I did call attention to its technical expertise when it was exhibited during the artist’s lifetime, and I do think it explains itself better in the context of this larger show---since the stain paintings – which I’d never before seen in such plenitude—focus on circle motifs to such a high degree. Thus, when the aged artist returns to circular themes with his “orbs,” one may say that he has finally come full circle.

“Revelation” is a distinguished show, a fitting tribute to a major master. I had a better time at “Jules Olitski on an Intimate Scale,” atGeorge Washington University’s Brady Gallery. Not expecting as much, I was surprised and delighted by all these enticing little pictures, dancing up & down along the walls in a masterful installation. The informality of the show was very appealing, particularly after the comparatively stiff and dignified atmosphere of the Katzen Center show. Rightly or wrongly, I felt closer to the artist at the Brady.

Another possible reason I liked this show so much was that it has so much more variety in shapes and sizes, vertical canvases alternating with horizontals, and sizes going from 27 x 18 inches, for “Other Flesh-Sixteen” (1972), a minuet in gray and gold, to “Cybele-Four” (1978), a gigue in palest brown that measures just 5¼ x 8¾ inches.

All told, I put stars next to fourteen of the pictures on my checklist. They range from “Shaker” (1961), with its congeries of tiny circles, on through “First Position” (1965), with its sandy colors and linen texture, “Mary Flayed – Twenty-Nine (1979), with a darker gray, moon-surface-like finish, and the heart-stopping golden shimmery gray of “Personal Realities” (1989) – all the way, indeed, on to “Pleasures: One” (2001), with a solitary (though wobbly) brown-black orb floating on a sea of cream and sunlight, in turn is defined by a surrounding wiggly border of black/brown.

BACK TO NY: OLITSKI & CARO AS DRAFTSMEN

Returning to New York, I was greeted by yet another opportunity to appreciate the talents of Olitski—as well as a new opportunity to appreciate the talents of one of his longtime friends. At Freedman Art is “Caro and Olitski: Masters of Abstraction Draw the Figure,” as curated by Karen Wilkin (through February 2). On view are two dozen drawings of nude female models, approximately half by Olitski and half by Anthony Caro.

Although 20 of the drawings in this show were done in the 1980s or more recently, three by Olitski from the 1960s testify to the fact that he and (I would imagine) also Caro have enjoyed drawing from the figure for far longer than that. I well remember that when I first met & wrote about Olitski, for Time in 1968, he told me that Greenberg, and a few other friends liked to sketch from the model with him. Our story was illustrated both by color photographs of his paintings and by a black-and-white photo of the artist with one of his drawings from the nude behind him.

Also at Freedman Art are one abstract sculpture by Caro and one abstract painting by Olitski, intended to demonstrate the kinship between abstract & representational, but the drawings are the main attraction here. From a formal point of view, they are purely and securely masterful, demonstrating a full command of their subjects, composition and media (charcoal, pencil, crayon and pastel).

Olitski’s images are more varied than Caro’s. Quite a number of them are colored pastels, and depict reasonably slender women. Caro’s figures have more upholstery; several, with enormous breasts and/or buttocks, make me think of the old-fashioned sort of hefty Wagnerian sopranos whose costumes featured small metallic turrets to encompass their mountainous breasts.

AN UNCULTIVATED POINT OF VIEW

As I say, from a formal point of view, these drawing are masterful, but alas for me, I am an iconographer as well as a formalist. I am also a (straight) & mildly feminist female of the species. For all of these reasons, I am troubled by the subject matter in some of these drawings. They all depict women, no men at all, which leads me to wonder whether it is the esthetic beauty of the human body which draws these artists to these subjects, or whether it is something a little more elemental.

Not that it should make any difference, but I’m not flattered by the idea that only women should take off their clothes and pose. Further, I am disturbed by the fact that almost none of Caro’s women have any heads. Olitski’s do, but more often than not, they are turned away from the viewer.I freely concede that faces are practically impossible to render convincingly in the 21st century, but to make a cult out of headlessness is to avoid the problem.

I don’t know where this headless, faceless business started. Horacio Torres (1924-1976), whose paintings of female nudes were greatly esteemed by Greenberg, also often featured headless torsos. I believe that Greenberg considered this a plus—to such an extreme, mayhap, that this came to be a hallmark of the modernist school (?). A female body with no head may satisfy some deep-seated male fantasy that a woman should be all flesh and no brains or soul to worry about, no ability to see, speak, hear, taste or smell.

Olitski didn’t indulge this fantasy to the same extent that Caro does. Whereas Caro’s pictures bear titles like “Standing Figure,” the titles of Olitski’s pastels often include the name of the model—e.g. “Raimonda: Green” (2004). Square though it may sound, my favorite drawing in this show is Olitski’s “Luisa and Lucinda” (1996), which depicts two pert little nude & generously proportioned misses looking coyly over their shoulders at the viewer. This view doesn’t provide a full-face view of either, but the three-quarter face view is enough to indicate that these are real women, not just libidinous fantasy.