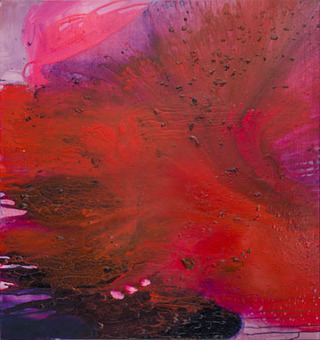 Sandi Slone. Vulcan Love. 2012. Oil and acrylic on canvas, 46 x 43 inches. Courtesy of Allegra LaViola Gallery.
From September 5 through October 6, “Sandi Slone: Quick Mettle Rich Blood” was at Allegra LaViola, on the Lower East Side. I thought the show worth seeing and accordingly wrote a favorable review of it for artcritical.com. My summary of Slone’s career, as I’ve followed it over the past three decades, began by observing that when I first saw her work, in the 1980s, I thought it “very beautiful.” My review continued with descriptions of what seemed to me pomonian side alleys that the artist had wandered through in the 1990s and the first decade of the 21st century, but when it came to discussing this latest show, I made it clear (or so I thought) that I liked it, on balance, very much. In general terms, I welcomed Slone’s return to pure & poured abstraction, and my review finished with enthusiastic descriptions of what I considered the three best paintings in the show—all of which I called “real winners.” One was “Sex with Strangers,” whose pouring I called “wonderful.” A second was “Vulcan Love,” which I called “dynamite.” The third was “Further Out” which I called “nearly perfect.” In response, I got an acid attack from the artist, which was published at the end of the review, where David Cohen, editor of artcritical.com, welcomes comment by readers. Well, I’m sorry Slone didn’t like the review, but---as I have often said --- I don’t regard an artist I’m writing about as my target reader. Like all reviewers – of theater, movies, concerts or books, as well as art shows—I write for the consumer, not the creator. Each review is intended to provide a link between the work of art in question and people who might want to go see and/or buy it. I am there to advise them as to whether or not the subject of my review is worth their time and/or money. If the creators like what I’ve written about them, that’s just so much gravy, but any critic more concerned with pleasing the creator than advising the consumer is not, in my opinion, doing her job.