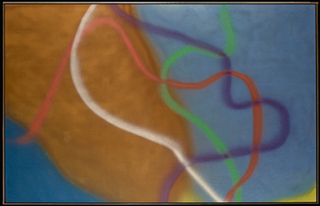 Dan Christensen (1942-2007). Sarajevo, 1969. Acrylic on canvas, 83 x 53 inches. Courtesy Spanierman Modern, New York
For hardy souls who can face the rigors of mid-town Manhattan, I recommend two shows within two blocks of each other: “Dan Christensen: The Early Sprays, 1967-1969,” at Spanierman Modern, on East 58th Street, and “Jackson Pollock: A Centennial Exhibition,” at Jason McCoy, in the Fuller Building. But you’d better hustle if you want to see them, the Pollock especially. It closes December 14. The Christensen is nominally on view through January 5, and will be open Wednesday through Saturday, December 26 through December 29, but the gallery is closed December 22 & 24 (as well, of course, on Christmas itself & New Year's Day).

SPRAY IN A NEW MODE

The Christensen show, organized by Christine Berry, and with a most interesting catalogue essay by Lisa N. Peters, displays 15 paintings, large and small. They were done in three years, not long after the Nebraska-born artist, fresh from the Kansas City Art Institute, had arrived in Manhattan at the age of 23 in 1965. As this show demonstrates, he had staged his first breakthrough, away from the logical but arid strictures of minimalism to a seemingly freer style that nonetheless obeyed its own less conspicuous but more demanding rules.

A transitional picture, “Times Square” (1967), opens this sequence, with a minimalist-type grid of many, many small circles in muted colors on a light brown field. While the title is reminiscent of Mondrian’s “Broadway Boogie-Woogie, “ I can’t help wondering if there wasn’t also a second slyly humorous allusion here—to the fact that the canvas is a 69 ½ inch square, and all the little circles on it look like rows of clock- or watch- faces (though admittedly lacking in hands).

More importantly, this seems to be the first (or one of the first) times that the artist used one of those spray guns (in those days, only to be obtained in auto body supply stores) that Christensen had (very possibly) learned about from seeing the misty panoplies of Jules Olitski. However, where Olitski had opened the nozzle of his spray guns wide, to cover entire canvases with fine, monochromatic mists of color, Christensen narrowed his nozzles, so that instead of monochromatic mists, he was able to make designs of narrow but distinctively fuzzy lines (sometimes superimposed upon larger and softer areas of sprayed color). Abandoning the drab color schemes of the minimalists, he enrolled in that difficult area of endeavor known as “color-field” painting.

Gradually, one can see his command of this medium opening up into progressively larger and less restricted compositions. “Pale Rumor” (1968) is one of the earlier paintings in this sequence, a medium-sized narrow vertical with two columns of horizontal loops that remind me of a couple of Slinkys, colored pale green, orange, blue and brown, all atop a golden brown field.

Later on, though, the loops become larger, looser and more irregular, though never so irregular as to seem deniable. According to Peters, at a certain point Christensen began using ladders, in order to sweep his nozzle over larger areas of canvas. He also began to work with unstretched canvases, cropping them to achieve what he considered their finest form. Two of the largest, most successful paintings in this show are “Pavo” (1968) and “O” (1968). Both draw big & sparse but dazzling loops and whorls of color across very pale & spacious fields.

These soft and fuzzy looping lines customarily employ only a restricted range of color: in “O,” for example, the lines are red, blue, and green, with yellowish brown and mauve used as accents. In “Pavo,” the lines are reds, greens and yellowish brown, with occasional blues and grays as background accompaniment. Both these paintings can be seen from the street. “Pavo” faces it, in the center of the gallery, and “O” hangs on the right-hand wall, behind a receptionist’s desk.

With a number of the paintings on view, the loops degenerate into what I think of as squiggles -- degenerate, as I say, because in most cases the loops create more complete & rhythmic forms, while the worm-like squiggles begin and end right on the picture surface. With the loops, one has the feeling of an arm swinging freely & rhythmically, while with the squiggles that rhythm is apt to look as though it were interrupted or irregular.

All such rules have exceptions, and in this case, "Sarajevo” (1969) is the exception that proves the rule. Hung against the window, it can’t be seen from inside the gallery, but it is a brilliant painting, the best in a fine show. With “Sarajevo,” the field is divided into soft, three deeply-colored sections (deep blue on the left, rust in the middle, pale forest green to the right) atop which 4 main squiggles intertwine with each other (white, pink, purple and green). These 4 relate to each other even though they don’t form a single line or loop. With only three loose ends, they occupy a tantalizing middle ground half-way between loop & squiggle.

AND, AMONG THE OLD MASTERS….

I was put on to “Jackson Pollock: A Centennial Exhibition” by (of all people) Roberta Smith in the NY Times. Her word for it was “ferocious.” This I guess is a compliment in Pomonian, but I would prefer words like “extravagantly lively,” “exciting” and maybe even that tired & overworked word, “beautiful.”

It’s not a big show, with only 19 items on its checklist. In addition to 15 pictures by Pollock, this includes two photographs of him, a small sculpture by him, and a piquant little “Western scene” that he inscribed in oil and crayon on the wooden lid of a cigar box (ca. 1930-33). None of the pictures on view are large, either, but what the show lacks in scale, it makes up for in ambition.

The memorabilia I mention underlines the affection with which this show was put together. The proprietor of the gallery, after all, is the artist’s nephew, but he is also well aware of the quality of his uncle’s output (as relatives of great artists aren’t necessarily). And he knows how to convey it.

The entry vestibule, with its receptionist’s desk, is given over Pollock’s early & predominantly figurative phase. Here are the cigar box, the photos, the haunting little carved “Stone Head” (ca. 1930-33) whose wide open, staring eyes uncannily echo the little “Self-Portrait” from the same period, and a brightly-colored, tightly-composed little circular painting in which faint images of Jungian/Mexican folk subjects are intertwined.

Then the main gallery opens out with 7 pictures. They chronicle the before, during & after phases of Pollock’s signal accomplishment. Near its beginning (chronologically speaking) is an entrancingly colored & lively semi-abstract “Constellation” (from the Accabonic Creek Series, 1946). At its ending (chronologically speaking) are three pictures from 1951, two very subtle abstract ones in ink on rice paper, plus one rather heavy semi-abstract oil on canvas demonstrating the artist’s “black stain” technique that proved so inspirational for Helen Frankenthaler.

The last gallery (in size half-way between the other two) has just four paintings in it, one for each wall, and, although all are modestly-scaled, each is strong enough to hold the wall on which it hangs. Particularly noteworthy is “Number 34” (1949), a brightly-colored stellar example of the artist’s pouring technique with thick, rich paint application and a restrained use of color (black, silver, reds, a golden yellow and white). Another winner here, a composition with black pouring from ca. 1947, I have seen before, but it looks better now to me than it did then, possibly because it is in such good company.

Still, the star of the show is in the largest gallery: “Number 23, 1949.” It measures only 26½ by 12 1/8 inches, and its four colors (apricot, dark mint, black and yellow) are very sparingly applied. The canvas surrounding the central stalk-like design gets plenty of room to breathe, and the whole, with its loose, free (yet invisibly disciplined) splats, adds up to powerful ecstasy.

Like a very large proportion of the paintings in this splendid show, this one comes from a private collection—and what a private collection this particular one must be, for “Number 23” comes from the collection of Clare and Eugene V. Thaw. Quite aside from being co-author of the Pollock catalogue raisonné, and one of few people who can tell a genuine Pollock from a fake, Mr. Thaw must have an eye to equal that of Clement Greenberg (my ultimate compliment): I have yet to see a work of art by any artist that he has loaned to any show that didn’t bring out my larcenous instincts.

Two shows in Chelsea have work by artists whose careers I've followed for years. The first is “Jill Nathanson: the air we swim in,” at Messineo Art Projects/Wyman Contemporary (through December 20). The second is “The Variations of Abstraction,” a group show including Don Ahn, Doug Frohman, Hee Sook Kim, Jim McCaul, Linda Plotkin and Francine Tint, at Walter Wickiser (through January 2). Nathanson is showing pretty paintings similar to those at her previous exhibition at this gallery, two years ago, except that instead of many small ones, there are a smaller number of relatively larger ones.. These paintings are made of acrylic and synthetic polymer, which create shiny, gauzy, sail-like shapes in pale colors. In most (or maybe all) of these paintings, a small area covered with more painterly & opaque color is added. Sometimes these small areas add, sometimes they don't. The best painting is"Converse 'Cool,'" (2011), in which the opaque element is minimal or missing; the second best, "Girl with Pencil"(2012) does have an opaque element, near the top.....Over at Wickiser, Tint's "Spouting" (2012) is the best & in fact just about the only reason to see this show.