A VISIT TO NEW HAVEN: CARO 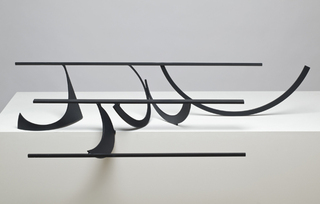 Anthony Caro. Table Piece LXXX, 1969. Steel, painted deep blue, 13 1/2 x 53 x 38 inches. Private Collection, London.
The New Yorker and the New York Times headed to New Haven to commemorate yet another face-lifting at the Yale University Art Gallery, but I had another destination: “Caro: Close Up,” an exhibition featuring more than 60 mostly small-scale works by the British master at the Yale Center for British Art (through December 30.) Nor was I sorry to spend all my time at the Center, despite the fact that the Art Gallery is directly across Chapel Street, for the interior architecture of the Center is so beautiful that it’s always a pleasure to visit.

Entering the lobby, one finds oneself in a courtyard that reaches clear to the ceiling, where skylights pour natural daylight down through the entire five floors of the building (albeit aided by floodlights). The natural brown wood of the courtyard’s interior walls, above the first floor, is ever so warm & inviting, while the gray steel paneling on the ground floor sets off the travertine marble floor to perfection. All of this provides a great setting for the three pieces of sculpture currently on display: a marble late cubist Barbara Hepworth, Caro’s much-loved buttery soft but also upstanding painted steel “Orangerie” (1969), and a life-size baroque statue of William III (actually William I as far as the Brits were concerned—ruler of Holland as William III, he took over the British throne with his wife, Mary Stuart, as William I after the Glorious Revolution of 1689).

THE PERMANENT COLLECTION AT ITS ACME

The Caro show, as I speedily ascertained, is on the second floor, along with selections of contemporary art deemed appropriate to accompany it, but I never can visit this museum without going up to revel in its permanent collection of English painting to1850, on the fourth floor. Not only do I love its peerless collection of Reynolds, Gainsborough, Hogarth, Joseph Wright of Derby, Stubbs, Turner & Constable for its own sake, but the setting is so relaxing, with large, square galleries whose walls are that lovely natural wood again, windows giving out onto the courtyard & also onto the exterior, and comfortablel upholstered chairs so conveniently placed that you can just sit down and lose yourself in the paintings in front of you.

I will say that on this occasion, I was a little put off by the inclusion of some small 21st century paintings meant to serve as commentary on Constable’s cloud paintings, and hung next to them: the artist who made them is not nearly as good a painter as Constable, and would not be here could he not claim to be “contemporary.” I was able to find a chair that blocked that aspect of the show from view, and enabled me to contemplate instead Constable’s wonderful large “Hadleigh Castle” (1829), one of the joys of that collection.

Progressing down to the third floor, I came up against another special exhibition. This one is entitled “The English Prize: The Capture of the Westmorland, An Episode of the Grand Tour” (through January 14). I found it fascinating. This one was curated by Maria Dolores Sánchez-Jáuregui, a senior research fellow at the London-based Paul Mellon Centre for Studies in British Art, and Scott Wilcox, chief curator at the Yale Center for British Art. In essence, it’s a lively detective story, with all the human interest & drama that such a description implies.

Seems that in January 1779 the Westmorland, an armed British merchant ship sailing from Livorno in Italy to London, was captured by two French warships and declared a prize of war. It had been carrying – among much else— 50 crates of artworks and books that had been acquired, principally in Italy, by young Englishmen, fresh out of university, taking the Grand Tour of Europe to complete their education, plus other collectors, artists and dealers.

All this loot was sold to a Spanish trading company and eventually found its way into the possession of King Carlos III of Spain, who in turn distributed it to art schools and other worthy recipients, especially the Real Academia de Bellas Artes de San Fernando in Madrid.

For centuries, this whole chapter of history was forgotten. Then in the 1990s, research on five funerary urns in the archaeological museum in Madrid sparked discoveries that ultimately led to the recovery of the inventories made at the time of the ship’s capture and the sale of its contents. These allowed scholars to identify who had sent what (the crates were all marked with the initials of their often noble owners).

Further detective work made it possible to find out where much of the work had gotten to, and the result is a rich and varied exhibition, with everything from funerary monuments (modeled after ancient Roman monuments), enchantingly painted ladies' fans, and huge art books with elaborate engravings of famous sites to paintings ( I was particularly taken by some lofty landscapes by John Robert Cozens. Wall texts introduce you to some of the people who owned these works and sent them via the Westmorland. There’s also a jolly portrait of Carlos III, from the studio of Anton Raphael Mengs, that may or may not have been on board the Westmorland but shows an appealingly wizened, cheerful face.

This was what I had come for, and I yield to no one in my admiration for Caro, at least when he’s at his peak. The problem is that over the years he has experimented with so many different media and in so many different contexts that he sometimes seems to me uneven. This situation is amplified by the choice of work in this exhibition, which was organized by Julius Bryant, Keeper of Word & Image at the Victoria and Albert Museum, in collaboration with the artist; the organizing curator at the Yale Center for British Art was Martina Droth, head of research and curator of sculpture there.

The exhibition is very handsomely installed, with no labels, but a nice little booklet that one can pick up at the entry with photographs of the work on view in the order that it is placed with dates, media etc.

I wish I could be as enthusiastic about the catalogue, but it was the one of the more irritating that I’ve read recently. Bryant's essay tries hard to make formalism seem archaic and outdated. The truth is that so much contemporary art today fails when evaluated in formal terms that card-carrying pomonians must do their best to try & discredit the entire formalist approach. This is known as shooting the messenger.

Droth has some interesting things to say about Caro's materials, but devotes at least as much & maybe more space to materials that haven't been as consistently rewarding for the artist. In her discussion of his use of steel, her emphasis on the prior history of his found materials tends to make him sound more like an assemblagiste on the order of Rauschenberg than an integrative constructivist in the tradition of González and 1920s Picasso.

Robert Storr, Dean of the Yale School of Art, contributes another essay, which (like the first two) is presumably in the interests of making Caro seem more "accessible" to today's young pomonians. Unfortunately, he doesn't seem very interested in discussing Caro himself, lavishing attention instead on past & present artists in the tradition of dada and surrealism who have made isolated pieces of art that can be related (however remotely) to Caro. The best thing about the catalogue is the brief "conversation" between Bryant and Caro himself.

The show as a whole is much better than the catalogue would suggest, though it still suffers from what might be called residual resentment of modernist values. The idea seems to have been to focus on smaller, more intimate works, rather than the larger, even monumental, ones that have so often been seen, and to otherwise explore equally unfamiliar aspects of Caro’s art. There's nothing wrong with this idea, but, as realized here, the result is a show that emphasizes biography as much and maybe more than esthetics.

In the first, opening gallery, we get a sizeable display of bronzes and drawings made in the 1950s, when the young Caro was still under the influence of his mentor, Henry Moore, to say nothing of late Picasso, Francis Bacon, and Francophile existentialist angst. I suppose all these works are kind of interesting (especially the figure studies corrected by Moore). And all the works in this section suggest an early talent, but none really escape a “period” look.

Also included—in the third and last gallery, especially---are what sometimes appear to be experiments from the 1980s to the present, albeit in more traditional media: bronze, ceramics and art papers. There are some successes here. I would cite “Obama Veil” (1990/1991), a paper wall hanging made while Caro was working with the Ohe family of papermakers in Obama, Japan, and “Paper Sculpture No. 1 – Eyes” (1993), a squared-off piece, black with green streaks on it. Two small bronzes that I liked were “Cuckoo” (2011) and “Sackbut” (2011/12).

I didn’t like any of the ceramics (though I have liked other Caro ceramics seen elsewhere). And I didn't see any of Caro's more recent figurative work here (though Storr reproduces that fine bust of Greenberg in the catalogue).

Still, it's the second, largest gallery of the three which is the best reason for going to see this show -- together with “Orangerie” and the two also large, magically supple painted steel sculptures at the entrance to the show, “Trefoil” (1968) and “Table Piece XCVII” (1970). The second gallery – delightfully lit by windows on either side of it--has six further scintillatingly off-centered smaller steel “Table Pieces,” teetering & yet balancing miraculously on their plinths. They all look as fresh as though they’d just emerged from Caro’s studio, still timely—or rather, timeless..

It's difficult to single any one out of the six from this harvest of rich suggestion, but if nailed to the wall, I would call my favorites “Table Piece XLII” (1967), a green mini-monster, “Table Piece LXXXVIII—Deluge” (1969), the bright yellow dancing one owned by MoMA, and “Table Piece LXXX” (1969), in which three bold deep blue horizontals step down into space, only to be countermanded – and saved --by arcs.

Of the selections of other contemporary art, they are mostly pleasant (except for the tedious exhibition devoted to Damien Hirst’s now well-worn humor). It is good to see pride of place given to larger abstractions (by John Hoyland and John McLean), while the icons of pop & op (Richard Hamilton and Bridget Riley) are relegated to modest graphics. But there are a few omissions, too. I really wish that somehow the Center could acquire a Caro of its very own (and how about work by Charles Hewlings, David Evison & Frank Bowling into the bargain? Those are three more Brits who have done credit to their country).