"THE PATH OF NATURE" 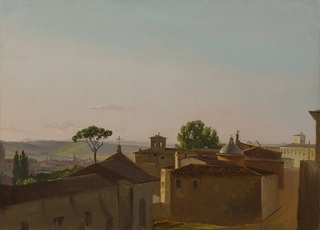 Simon Denis (Flemish, Antwerp 1755-1813 Naples). View on the Quirinal Hill, Rome. 1800. Oil on paper, laid down on canvas, 11 5/8 x 16 1/8 (29.5 x 41 cm). The Metropolitan Museum of Art, The Whitney Collection, Promised Gift of Wheelock Whitney III, and Purchase, Gift of Mr. and Mrs. Charles S. McVeigh, by exchange, 2003.
With laudable civic ambition, The Metropolitan Museum of Art evidently feels an insatiable need to supply its regular and potential visitors with an unending stream of “new” exhibitions. Even the Met doesn’t have the money to make all these exhibitions genuinely new, however, in the sense that it can keep staging subject-based exhibitions which rely upon borrowed work as well as work already owned to make whatever point the show is supposed to make. Sometimes, this leads to a show that makes a somewhat different point from the one it was supposed to make, or a point made in addition to the point it was supposed to make.

My example here is “The Path of Nature: French Paintings from the Wheelock Whitney Collection, 1785-1850” (through April 21). This is one of three new installations of work from the museum’s permanent collection that it held press briefings for on February 4--each with a curator to introduce the show. The curator who spoke about "The Path of Nature" was Asher Ethan Miller. He explained that it consisted of about 50 paintings assembled into a collection, mostly during the 1970s, by Wheelock Whitney III, a philanthropist and art historian who has published on Géricault (the group was acquired by the Met ten years ago, in 2003, partly as a “promised gift” and partly through purchase). The 50 paintings are almost all on the small side. Mostly they are by French painters, although there are also works by Belgian, Swiss, German, and Flemish artists.

Of the 50, about 30 are plein-air oil sketches, originally made on paper—which can easily be transported outside the studio (in some cases, the paper has since been reinforced by canvas, although paper in those days was a lot sturdier than it is today, due to its high rag or other enriching content). Almost all of these paintings are charming. As a rule (with some exceptions), they depict the golden-brown stones of buildings and the sunlight on the cities and countryside of Mediterranean countries, especially Italy.

Rome, after all, was an artist’s Mecca during this period (1785-1850)—not only for the fortunate few French artists who had won permission to study at the French Academy in Rome, but also for other northern European artists who had tired of the grey skies of northern European winters. As Mr. Miller pointed out, the four diverting paintings by the Flemish artist, Simon Denis (1755-1813), are among the “discoveries” of this show. Previously Denis had been pretty well forgotten, but here he was, painting cloud studies decades before Constable," though his softly lambent view of the Quirinal Hill in Rome, seen just at dusk or perhaps dawn, is more representative of the show as a whole.

European artists, of course, had for centuries made such preliminary studies to serve as the basis for the more elaborate paintings that were afterwards worked up in the studio. But the studies themselves were never exhibited publicly---not until after Monet, Renoir and other impressionists took the then-radical step of exhibiting their paintings created sur le motif at the Salon & in their own group shows as finished works during the 1860s and 1870s. This new context seems to have shocked art lovers of the 19th century much as Marcel Duchamp would around 1917, when he was taking objects such as a shovel or urinal out their utilitarian contexts and sending them off to art shows (in this he was rather paradoxically following in the impressionist path).

However, just as today’s “avant-garde” art lovers are used to seeing everything from food to merde in Chelsea’s art galleries, so too the vogue for fresh-air and other informal studies made before the advent of impressionism began to escalate as soon as the impressionists themselves achieved recognition (beginning in the 1880s). I’m willing to bet this vogue has never slacked off, though I also suspect these sunny little Roman scenes must have been particularly sought after in the 1970s.

I say this because I remember how Kirk Varnedoe, in a seminar at Columbia in the late 1970s, showed us a bunch of such little studies that had been made, mostly in the 1820s, by Corot. Gawd, but they were beautiful! Peter Galassi, who was in the same seminar, was so taken with them that he did his dissertation on them, and eventually got a book out of it, published in 1991 (though his career otherwise trended into photography, and he also became chief curator of photography at MoMA). The current show at the Met has two Corots. One is a portrait of cow that looks like—well, a cow. The other is a fabulous scene of a waterfall at Terni (1826). Its vitality makes it leap off the wall, and puts every other painting on view here in the shade.

Another reason I say that these sunny Italian oil sketches must have been in vogue in the 1970s is because of the 20 other paintings in this show. They are mostly small, sentimental genre scenes of children, Italian peasants and brigands, with the occasional religious scene or study of a nude thrown in for good measure. Most of these are Salon paintings, of a type that was exhibited at the time that they were made. They provide abundant evidence of the appetite of Salon audiences for sentimentality in those days, as well as the lengths that so many painters would go to in order to satisfy it.

Some of our most distinguished curators and art lovers still go for this sentimentality, or are at least inclined to overlook it, if they think the painting in question can be used to illustrate the economic , political or social history of the period. That, after all, is what pomonian art historians most like to do anyway, being all hipped on “history” as part of their neo-Marxist heritage.

Perhaps it is easier to explain to museum visitors all about the customs of previous eras than it is to try and get them to appreciate the art as art. Art for art’s sake, after all, is a dirty word in academia, formal language is considered unspeakable, and most tourists probably don’t even realize that style is just as important, if not more important, than subject matter. So why try and educate them about this very critical aspect of art appreciation? Why not just humor them when they ask, what is this picture ABOUT?

One case in point is a picture by Lilly Martin Spencer (1822-1902), a long (and deservedly) forgotten American artist who has been rediscovered in the past few decades largely because she was a woman and there are not that many women in the pantheon of 18th & 19th century American art (Harriet Hosmer & her Marmorean Flock being among the few I can think of, as well as one or two of the daughters of Philadelphia’s Peale clan, Mary Cassatt, Cecilia Beaux, and Lila Cabot Perry). I understand that the Met has hung this Spencer in one of its galleries of American paintings, and that this fact inspired one of its docents to go out and research the customs of the period.

I don’t know exactly which painting this is, but think it likely that it’s “Young Husband: First Marketing” (1854), since this is currently featured at the Met’s website. There it is accompanied by a discussion of how the painting would have been received when exhibited back then. This leads me to believe that “reception theory” is still a popular pomonian line of attack—or, in this case, defense, since the general idea presented here is that the picture would have been greeted with outrage because its subject matter was so “radical” – in other words, that it really belongs in the cherished mythology of the avant-garde. Sure….

To me it’s a really sappy painting, painted in an academically approvable style. It pokes condescending fun at the adorable clumsiness of an innocent but lovable young husband, trying to help his doubtless (though unseen) sweet little wifey by doing this household chore. In other words, it reeks of sentimentality, and I shall never forget an excellent teacher I had in college, Rosalie Colie, who said that Hemingway was sentimental and that sentimentality was a sign of insincerity. I still like Hemingway, but Lilly Martin Spencer carries sentimentality to an extreme that betrays its insincerity, and I don’t consider insincerity a positive human (or esthetic) trait. It either irks or bores me.

Although I can’t recall that any of the Salon-type genre paintings in “The Path of Nature” hit this level of sentimentality, they too were intended for contemporary consumption, and as a result were back in vogue in the 1970s, the pop artists of the 60s having by this time ascended to the status of Old Masters. I got lectures about Salon (and Royal Academy) paintings coming and going in grad school, where such lectures were called “revisionist art history.” And I felt then (as I feel now) that they were motivated (however unconsciously) by the desire to find roots, or precedents, or kinships, or whatever else you want to call them, for the equally popular (but unsophisticated) taste that was (and is) gratified by pop.

As an example of the more innocuous sort of realism, I give you the recent George Bellows exhibition at the Met, which wowed not only the pomonian cognoscenti, but also the type of a tourist still inclined to think (if not say), "I may not know much about art, but I know what I like....." At a dinner party earlier this winter, I encountered just this kind of tourist, who (without my saying anything) clearly knew that (in my opinion) she was opting for tripe in her enthusiasm for Bellows. She didn't actually say "I may not know...etc." but her passionate endorsement of the Bellows, plus the rebellious glance she shot me, said it for her.

As an example of the campaign to trace pomonian art back to earlier modernism, I cite a book by Catherine Craft from the University of Chicago Press that I saw, in mid-February, among the book exhibits at the College Art Association’s annual conference (in New York this year). Entitled “An Audience of Artists: Dada, Neo-Dada and the Emergence of Abstract Expressionism,” it purports (according to the jacket) to show that artists like Pollock and Motherwell really evolved out of dada, and artists like Rauschenberg and Johns really evolved out abstract expressionism. This is cockamamie history, as the Pollock and Motherwell really evolved out of cubism and automatist surrealism, while the neo-dadaists were satirizing ab-ex and reacting against it, but today’s art historians look for every opportunity to place another laurel on the brows of Duchamp and the neo-dadaists, and it wouldn’t surprise me if this fable did very well in the art-historical marketplace.

In any event, “The Path of Nature” illustrates the point I started to make at the beginning of this review—namely, that when you put together a show out a museum’s storage areas, you may wind up making a point with it that you hadn’t planned on making—in this case, a mini-commentary on collecting tastes in the 1970s. But don’t get me wrong. I still recommend this show. Just focus on all the lovely little plein-air oil sketches on the wall facing the entrance, and you’ll have a lovely time. Don’t knock yourselves out with the kiddies and the brigands on the walls to right and left—unless you want an illustration of the difference between art & taste.