CAN ONE RUIN MATISSE? 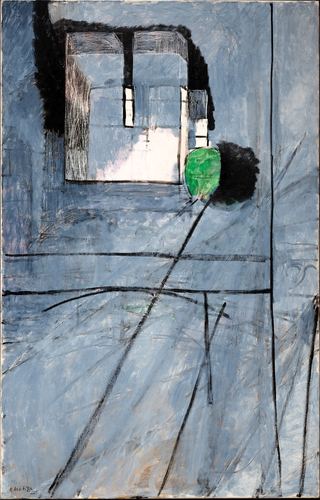 Henri Matisse (French, 1869-1954). Notre-Dame. 1914. Oil on canvas, 58 x 37 1/8 in. (147.3 x 94.3 cm). The Museum of Modern Art, New York. Acquired through the Lillie P. Bliss Bequest, and the Henry Ittleson, A. Conger Goodyear, Mr. and Mrs. Robert Sinclair Funds, and the Anna Erickson Levene Bequest given in memory of her husband, Dr. Phoebus Aaron Theodor Levene, 1975. (c)2012 Succession H. Matisse/Artists Rights Society (ARS), New York.
Another show at The Metropolitan Museum of Art, even more worthy of visiting than that of George Bellows, gives us a master beloved by modernists for his sheer mastery of the art of painting, and for the enormous pleasure he has already given so many of them over the years. He is also popular with postmodernists because he is figurative enough to enjoy crowd appeal in the 21st century -- although this is an honor to which he has only ascended over the course of ten decades.

At the original Armory Show, which will be celebrating its centenary this year, his unconventional depictions of female nudes upset conservative audiences even more than did Marcel Duchamp with “Nude Descending a Staircase.” Duchamp’s nude was only a bad joke, but this other painter's way of dealing with a similar subject seemed to be desecrating the sacred ideal of the beautiful, as personified by the female figure in painting and sculpture since the Renaissance.

I refer, of course, to Henri Matisse, who is currently playing the Met in “Matisse: In Search of True Painting,” (through March 17). This exhibition of 48 paintings from throughout the artist’s career (plus drawings, photographs of paintings, and graphics) is intended to present to us his practice of making paintings in pairs, trios and series. This is said to offer us “the opportunity to investigate Matisse’s motivation as well as the innovative ways in which he continually pushed the boundaries of his painting.”

This show was organized in Manhattan by the Met’s Rebecca Rabinow, but it’s a collaborative presentation with the Statens Museum for Kunst in Copenhagen and the Pompidou Center in Paris, both of which have already displayed their versions of it.

The idea here seems to be to show us the process by which Matisse arrived at his many masterworks, process having been the leitmotif of Pomonia ever since Saint Marcel took a bicycle wheel and stood it on a stool, thereby demonstrating that the act matters more than the result. And the zenith of the show from this ideological point of view is the gallery near the end of it that recreates part of a show staged in a Paris gallery in 1945. At this 1945 show (so the story goes), Matisse displayed paintings accompanied by quantities of black-and-white photographs taken to show the various stages through which these had passed on their way to completion. (Matisse hired the photographer himself.)

For me, I'm afraid what may be the zenith from an ideological point of view is the nadir from a purely visual one. I’m sorry, but I thought this gallery really ugly.

In fact, at the media preview I made the mistake of entering the exhibition at its exit and walking backwards towards the entrance, thus receiving a very negative first impression of the show as a whole (the earlier galleries are far more rewarding to contemplate than the later ones).

Entering at the exit is also disastrously easy to do, as the entrance is way, way down at the end of a long corridor of the museum, and it’s all too easy to take a right turn into the gallery space displaying early 20th century American art before you get to the entrance to the Matisse show --- where you also have to take a right.

Fortunately, I went back to the show after it had opened, and so should you, because really this tiresome little conceit of showing works in pairs & trios to demonstrate “process” isn’t taken too literally, most of the time. Sometimes (as with the three “Laurette” portraits) the images are very similar, but more often (as with the four views of Notre Dame) the similarity of subject is about all the group of pictures have in common.

With the Notre Dame "series," the story is half evolution, half revolution. At the beginning of the sequence, we see two essentially postimpressionist versions of the famous Parisian church, both done within a year or so of the turn of the century. Then we see two more paintings of the same subject, both done in 1914. One is much more simplified, and charming but not particularly challenging. The other is defiantly and radically abstracted--the largest and (deservedly) most famous version.

You'll find a lot of other favorites here, too, and some that may be less familiar, even though not everything is as well-displayed as it could be, and the quality is somewhat uneven. I didn’t see too many of the really famous Matisses, and there is an essential footlessness about the show as a whole. Still, I‘m happy with any excuse for another chance to admire the handiwork of one of the century’s most protean creators.

I should add that my disdain for the gallery with the black-and-white photographs may not be shared by you, gentle reader. After I'd seen the show, I noticed one of my artist "friends" on Facebook saying that he had really enjoyed this gallery, so maybe this display of "process" can be a welcome initiation into how a master achieved his effects. It can also serve as evidence that fine art can be labor-intensive, no matter how artless the finished result may appear.
Be the first to comment