"DRAWING SURREALISM" AT THE MORGAN 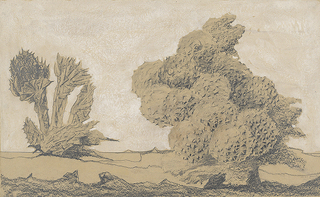 Max Ernst (1891-1976). Le start du châtaigner (The Start of the Chestnut Tree), 1925. Frottage with graphite pencil, and gouache. The Morgan Library & Museum, New York. Gift of Walter Feilchenfeldt in honor of Eugene and Clare Thaw, 2011.28 (c) 2012 Artists Rights Society (ARS), New York/ADAGP Paris. Photography by Graham S. Haber, 2012.
Occasionally, a show is mounted that neither stirs me personally nor makes me feel that most of my readers would want to see it, but that I still feel deserves a review (even if I am not the right person to write it). Why? Because so much time & effort & maybe even love have gone into its creation, and because it does such an impressive job of chronicling a historically important moment. Such a show was “Drawing Surrealism,” which appeared at the Morgan Library & Museum from January 25 to April 21. Curated by Isabelle Dervaux of the Morgan, and Leslie Jones of the Los Angeles County Museum of Art, it was at LACMA from October 21, 2012 to January 6, 2013. As its title indicated, it brought together 165 surrealist “drawings” by 79 artists from 15 countries.

“Drawing” was interpreted by the organizers of this show as elastically as it usually is at the Morgan, to mean pretty much any two-dimensional image that isn’t an oil (or acrylic) on canvas (not that acrylics were much in use during the period covered by this show, which runs from 1915 to the 1950s). This means we got pictures whose grounds were mostly paper, but with a vast range of media employed: graphite (aka pencil), charcoal, ink, pastel, gouache, watercolor, oil and/or collage, to say nothing of graphics, which are mechanically printed. This show also had the occasional multimedia spectacular that defied categorization, such as the famous “Battle of Fishes” (1926), by Andre Masson, which incorporates sand, gesso, oil, graphite and charcoal on canvas.

It’s a totally graceful painting, with a lot going on in it despite its engaging semi-abstractness, and I’ve had a soft spot for it ever since I first saw it in MoMA’s landmark 1968 exhibition, “Dada, Surrealism & Their Heritage.” But in this show, it was in something like a minority in that it afforded primarily visual satisfaction, as opposed to primarily literary satisfaction—the latter orientation being the one that characterized the sizeable majority of the works in this show. Surrealism, after all, was founded by a poet, Andre Breton, and it was a literary movement before it was an artistic one.

Drawing also employs the linear aspects of an artist’s talent, as opposed to the coloristic ones. Since (when I’m writing reviews) I incline more to the visual than to the literary, and more to color than to draftsmanship, I was not (as I say) the right person to review this show. If you’d like to read a review by a right person, I’d recommend the one by Valery Oisteanu in the March issue of the Brooklyn Rail. Oisteanu makes a specialty of surrealism, and is himself a surrealist poet, as well as an art critic.

That said, I did find works worthy of commendation. Anything by Miro, of course, always freaks me out, and this show had two particularly winsome pieces by him. One was an untitled 24 image owned by LACMA, made of graphite, charcoal, pastel and watercolor, and depicting a whimsical ladder, a symbol for a person, and drops coming down out of some sort of tube. The other was one of Miro’s well-known “constellations,” a gouache and oil wash from 1941. Its label touchingly quoted the artist saying that the “constellation” series of 23 works “were my refuge from the war,” begun in France in 1940 and completed the following year, after he’d fled to neutral Spain.

Miro, like Masson, was a proponent of the “automatist” branch of surrealism, which took its inspiration from Freud by developing techniques that supposedly allowed the unconscious to direct the pen or brush. At the opposite pole was the “academic” or “illusionist” branch, led by Dali. It ostensibly derived its inspiration from Freud by employing the imagery of dreams, but was also characterized by modeling, shading, and all the other representational techniques taught and learned in art schools. Dali, it turns out, looked terrific in drawings, the highlight by him in this show being his 1938 graphite study for “The Image Disappears.” This triumphantly ambiguous image could be read as EITHER a small woman reading a letter OR the large head of a man, her skirt doubling as his beard, and her head doubling as his eye.

Naturally, the show included examples of all the surrealist games and experimental techniques, with a sizeable space devoted to the “Le Cadavre Exquis” plus examples of frottage, decalcomania, fumage and photograms (to say nothing of an avalanche of collages, many incorporating figurative images and telling peculiar little stories that would hypnotize me if I were the sort to be hypnotized by such literary art). But the works which aspired to be nothing beyond experiments in technique mostly lacked the panache of works which incorporated these experimental techniques into more finished compositions. A striking example of the latter was the suite of 5 collotypes by Max Ernst from his 1926 Histoire Naturelle, demonstrating that powerful animal & vegetable-like forms could be made by exploiting frottage (a technique in which the artist lays a piece of paper over a rough surface and then rubs the paper with graphite until the patterns on the rough surface show through on the paper).

Picasso, I’m sorry to say, wasn’t at the top of his form in this show, and, as Oisteanu noted, some key figures were omitted altogether: Duchamp, Paul Delvaux, and Jean Dubuffet (just imagine – a group show in Manhattan without Saint Marcel – glory be!) I didn’t go for the ca. 1943 Pollock “Untitled (Drawing for P.G.)”, even if it was from the Thaw collection at the Morgan. Also, with rare exceptions, neither the Japanese nor the English entries thrilled me—there are clearly drawbacks to trying to cram as many nationalities as possible into a show like this.

Still, a number of lesser-known figures made beguiling contributions. Among them was Artur Harfaux (1906-1995), a Frenchman whose 1927 untitled graphite showed a weird being, 1/2 human (body) and 1/2 reptile (head). (Well, surrealism was supposed to be weird & unexpected, right?) There was a piquant Frida Kahlo graphite, “The True Vacillator” (ca. 1946-47); it showed that “naïve” Mexican lady to be more plugged into European sophistication than her fans might like to admit. Leonora Carrington (1917-2011), a Brit, appeared to good advantage in her pen-and-ink rendition of an island monster with two heads, a jungle cat, a crescent moon and a pair of scissors. Called “Brothers and Sisters Have I None”(1942), this piece may well have been created in the Spanish mental institution to which Carrington retreated after a nervous breakdown caused by the imprisonment of her lover, Max Ernst (though he was soon released, took up with Peggy Guggenheim¸ and went with her to New York).

Finally, among the Americans, it was (interestingly enough) neither Gorky nor Pollock nor Rothko whose work was most noticeable in this company, but rather Gerome Kamrowski (1914-2004), who started out strong in the later 1930s but never did graduate to abstract expressionism in the next decade, as his more illustrious contemporaries did. His massive “shadow box collage,” a big black, glass-covered relief construction entitled “Embalmed Universe” (ca. 1939) opened into a strange little world. It had white lines on black fields, with little hanging heads, and open eyes – or were they open vaginas? Such were the mysteries of “Drawing Surrealism.”