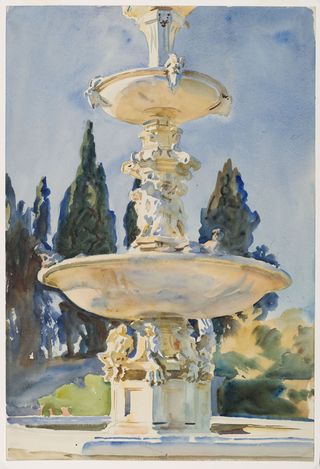 John Singer Sargent (American, 1856-1925). In a Medici Villa, 1906. Translucent watercolor and touches of opaque watercolor with graphite underdrawing, 21 3/16 x 14 3/8 in. (53.8 x 36.5 cm). Brooklyn Museum, Purchased by Special Subscription, 09.826
The Brooklyn Museum is also doing things by threes this summer. The talk of the town are the assemblages of El Anatsui. Connoisseurs of historic art are very taken by the watercolors of John Singer Sargent, but silly me! My favorite show at this museum right now is the photography of LaToya Ruby Frazier—not that the other two shows don’t have a good deal to recommend them, too.

“Gravity and Grace: Monumental Works by El Anatsui” consists of 30 wood and metal assemblages, mostly large to very large, and composed, according to the Brooklyn Museum's press release, of “appropriated objects” and “found materials.” This is what we used to call “found objects” or “objets trouvés” back in the days of Picasso & Braque, who introduced the concept into mainstream Western European art—as is doubtless well known to El Anatsui. Although born (in 1944) and raised in Ghana, his uncle (a Presbyterian minister) “directed his education along European lines,” according to one of the wall texts at the show. El Anatsui studied at the University of Science and Technology in Kumasi (1965-69), focused on Western (presumably European and American) art, and came “to historical African art only as an engaged outsider.”

Besides being the latest in the long, distinguished line of assemblages, El Anatsui’s work mostly falls into another category beloved of today’s popular avant-garde: its dimensions and direction vary with each installation. When Robert Morris was rolling out his lengths of gray felt, back in the 1960s, we called it “process art,” but the current term for this random form of installation is “site specific.” Indeed, the term “site specific” has been in use for quite a while now. The show as a whole was organized by Ellen Randolph of the Akron Museum of Art, and its Brooklyn presentation has been staged by Kevin Dumouchelle of the Brooklyn Museum. The artist lives in Nigeria, where he has had a long career teaching at the University of Nigeria in Nsukka, but the show originated and has already been seen in Akron (on through August 4 in Brooklyn; thereafter at the Des Moines Art Center from October 24 through February 9, 2014,and at the Bass Museum of Art in Miami, from April 11 through August 10,2014).

The most spectacular part of the show is in the spacious, high-ceilinged Iris & B. Gerald Cantor Gallery on the museum’s fifth (& top) exhibition floor. Here five huge semi-transparent, curtain-like shapes are hung from rods or ropes that crisscross the space above the viewer. All of this (if I understand my checklist correctly) is one work of art, entitled “Gli (Wall)” and completed in 2010. It reminded me of a bunch of newly-laundered bed sheets hung out to dry (though this analogy may be lost on most museum-goers, who presumably came to consciousness since electric dryers took over the land). These curtains are delicate and lacy: if you look at them closely, they resemble medieval chain mail, being made of hundreds and probably thousands of little screw tops from liquor bottles, held together by still-smaller curls of copper wire. It seems that there are a lot of these discarded bottle caps in Africa, so that using them in this manner creates an artwork that can be said to comment on African lifestyles and conditions (should a work of art need such justification).

I liked the general idea here, but after looking for a while at the more appealing parts of “Gli,” I became distressed by the way that all (or most) of the five pieces of curtain had additional pieces of additional & larger accretions fastened on around the edges. These extra accretions were irregular and not nearly as attractive as the basic chain mail material: they looked somehow messy and a trifle garbage-y, the essence of the subtly ugly that pomonian dystopia enforces upon so much “contemporary” art. (The bottle caps, too, seem to have originated in garbage dumps, but they redeem themselves by the neatness & regularity of their presentation.)

All the works in the Cantor gallery, including a number of similarly irregular ones hung on the surrounding walls, seem to be among the artist’s most recent. But entering the series of smaller galleries behind this main one, I encountered what seemed to be progressively earlier and earlier ones, and the earlier it got – what a troglodyte I am!—the better I liked them. First came a number of assemblages made out of shiny tin can lids or other prettier & more regular pieces of detritus. And, if you stay with the show to its end, you will get to some wooden pieces made in the 1980s and 1990s. I could have done without the “site-specific” wood pieces, made to be taken apart and reassembled by the eager hands of curators, but I really went for the two earliest wooden works, ”Mr. (Statue Male)” and “Mrs. (Statue Female)” (both 1980-1990). Semi-abstract, muscular and hilarious, they demonstrated for me a major natural talent that -- alas – had to take a pomonian route to achieve its present world fame.

Progressing one floor down, I came to “John Singer Sargent Watercolors,” organized jointly by the Brooklyn Museum and the Museum of Fine Arts, Boston, co-curated by Teresa A. Carbone of Brooklyn and Erica E. Hirsler of Boston (through July 28 at Brooklyn, then October 13 through January 20 in Boston). This exhibition of 93 watercolors by the perennial expatriate American artist unites, for the first time, holdings acquired by the two museums in his lifetime (born in 1856, he died in 1925).

Brooklyn’s were purchased from Sargent’s 1909 debut exhibition in New York. They include scenes of Venice and formal gardens in Italy, portraits, Mediterranean ships and Bedouin subjects made on a trip through the Near East in 1905-1906. The purchases made by Boston in 1912 were created by Sargent with a Boston audience in mind, and are more highly finished than the Brooklyn works. They include scenes from the Italian Alps and the marble quarries of Carrara, as well as more garden scenes and portraits. The show also includes a few Sargent oils, which mostly – if anything – demonstrate that Sargent was fresher and less obsequious in his watercolors than in his oils.

This show, for me, suffered from the inclusion of several nasty little panels showing motion pictures of one sort or another (whether videos or films I could care less). Nor was I much interested in the big display “exploring Sargent’s technique.” For me, the proof of the pudding is in the eating, and the proof of the technique is in the work itself. However, it’s very possible that many of my artist-friends would get a lot more out of this technical information than I did, and even I could see that these are elaborate and highly-finished little pictures, which combine the use of translucent and opaque watercolors in a masterly manner (together with not infrequently a penciled sketch beneath them). My only complaint in this department is that the virtuoso command of his medium too often led the artist into overly elaborate and even fussy detail—kind of a much of a muchness, as Lewis Carroll might have said. Technique is one thing; soul is another, and the former applied to extremity can cancel or obliterate the other.

Still, there are quite a number of exceptionally taking pictures in this exhibition. “Violet Sleeping” (1907-1908) is one of them (so much easier to achieve a modern-looking face when the subject’s eyes are closed). Also fine is “Corfu Cypresses” (ca. 1909) with a simple composition of trees marching along, left to right. The wall at the very back of the exhibition, labeled “Sunlight on Stone,” has quite a lot of splendid pictures, especially “Venice: La Dogana” (1911), looking up at the tower of the old customs house with its complicated sculpture on top. Other winners are “Genoa: The University” (ca. 1911), an upper loggia with a row of columns, and “Villa Falconiere” (1907) with its detail of a portico.

Interesting but not as successful is a study of a marble quarry, “Carrara: Quarry I” (1911). Sargent seems to have been striving for a “modern” (i.e. simplified) image, but it doesn’t come off. On the other hand, many of the pictures of gardens look very good, especially those depicting ancient Medici gardens in or near Florence. “In a Medici Villa” (1906) is particularly lovely, combining as it does simplicity with complexity, its majestic pale fountain towering from the very bottom of the artist’s paper to the very top.

Hidden away in the mezzanine gallery on the second floor of the Brooklyn Museum is “LaToya Ruby Frazier: A Haunted Capital” (through August 11). It features approximately 30 rugged, haunting photographs of the photographer’s self, family, friends and their hometown surroundings of Braddock, Pennsylvania. Braddock, in Allegheny County close to Pittsburgh, was once a thriving steel industry town, but since the 1970s it has become almost a ghost town, since the steel industry has moved elsewhere (not only abroad but also to remote U.S. surroundings where the steelworkers’ union is not there to represent them).

I first saw Frazier’s work in 2009, at the New Museum’s show, “Generational: Younger than Jesus.” The photograph I remembered seeing was a marvelous portrait of Frazier’s grandfather, seated on his bed, with a juicy picture of a pin-up girl above the head of the bed. That photograph is in this show as well (though neither it nor any of the other most memorable photographs were available for illustrating this review). Other subjects here range from “Mom’s American Cheeseburger” to street views of Braddock, often focusing on the former site of a hospital—which, though desperately needed by the remaining 2,500 residents in the town---has been torn down. Also moving are the images of the photographer’s grandmother, mother and herself. This family is plagued by illness: the grandmother has since died of cancer, the mother has cancer, and the photographer herself has lupus.

Frazier is yet young. Born in 1982, she received her BFA from Edinboro University in Pennsylvania in 2004, and an MFA from Syracuse University in 2007. Her teachers have included Carrie Mae Weems and Doug Dubois, and her work suggests an artistic maturity far beyond her years. These are rich, powerful photographs—more deeply felt, in my opinion, than either the exhibitions of El Anatsui or Sargent.