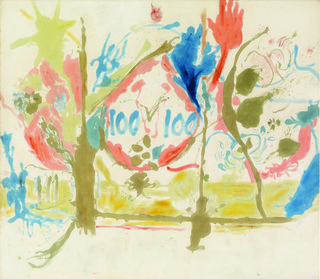 “Painted on 21st Street: Helen Frankenthaler from 1950 to 1959,” as curated by John Elderfield for Gagosian (closed April 13) was the largest, most ambitious and greatest gallery show of this season. Indeed, I cannot think of another in recent seasons to equal it. In a word, I loved it. On each of my three visits to it, I reveled in the artist’s exuberant imagination, passion, technical brilliance and surprising maturity (considering that these paintings were all made when she was between the ages of 22 and 31). I must concede that, as with all exhibitions offering such a range of works (29 in all), not every painting was on the same level. Although most of the work was of top quality, a healthy handful might at most be described as “very good.”

This, after all, is not too surprising, when you bear in mind that Frankenthaler was so young. Most of the earliest works in this show merely bear witness to the fact that she was an artist of promise (as opposed to the latest works, in which the promise is so abundantly realized). Then, too, she was of an age when one’s private life is apt to be more tumultuous than when one is older, and more deeply felt. By 1950, the year of the earliest painting in the show, “Painted on 21st Street,” Frankenthaler was already acquainted with Clement Greenberg. She would keep company with him for the next five years, in a relationship that was not without its ups and downs, and ending for good in 1955. After that, she was on her own for a couple of years, before meeting Robert Motherwell and marrying him in 1958.

Well, revisiting this two-year period within the Gagosian show, I found only a very few paintings that I’d still consider ‘confused and unhappy.” “Dawn After the Storm” (1957), might possibly fit this description, and maybe also “Europa” (1957), though the latter succeeded in spite of its excess. Over the years, I guess I’ve just become more accustomed to Frankenthaler’s unique brand of high-heartedness, and more willing and able to roll with her punches. Some paintings in this show—such as the pale and wildly-flailing “Jacob’s Ladder” (1957) might once have bollixed me but now merely bowl me over with their magnificence.

In any event, this exhibition had more paintings from the 50s than did the 1969 retrospective, which had only 16 from that period (all exhibitions seem to have become larger than they once were, along with the increase in the population and the gross domestic product). And this show began earlier, with an intriguing painting from 1950 that must have appealed to Larry Gagosian because of its title. It was called “Painted on 21st Street,” and this show was held at Gagosian’s 21st Street space (never mind that Frankenthaler’s 1950 studio was on the East Side and Gagosian’s gallery, like the rest of the Chelsea art community, is way over West).

“Painted on 21st Street" had a tantalizing granular surface (made with oil, sand, plaster of Paris and coffee grounds). It was a tasty study in creams, whites and tans, with curiously curly abstract shapes that were neither surrealist nor cubist, and not fevered enough to be abstract expressionist. It was a handsome painting by a very young painter who hadn’t yet decided which way she’d go, and it presided over a small, narrow entry gallery (the first of four) in which 5 paintings from1951 similarly show an open mind.

The second – much larger—gallery was dominated by Frankenthaler’s breakthrough painting, “Mountains and Sea” (1952). It was the first which employed her celebrated technique of staining on unprimed canvas, and its extreme lightness – its profusion of ethereal lighter blues, greens and pinks – created the impression of an adventurous young spirit venturing out onto very thin ice in the first frost of winter, and taking no chances by sticking to large, simple forms and thin washes of paint. Elsewhere in this space were further somewhat tentative but mostly still memorable experiments with staining. Among them, the standouts were the long, horizontal “Open Wall” (1953) and the ultra-pale, gentle “Shatter” (1953).

But it was not until the third gallery (another smaller, narrower one) that one saw Frankenthaler becoming thoroughly at home in the stain technique—to such a degree, indeed, that sometimes she all but overwhelmed it by ladling on the paint. But one also saw her learning the advantages of negative space, and the wisdom of using it to complement painted space. Outstanding for its use of only a pale gray and bareness was “New York Bamboo” (1957), and, for its combination of negative space and spatter, “Nude” (1958). Another winner in this gallery was “Western Dream” (1957).

The last (and largest) gallery was also the best, with “Jacob’s Ladder” PLUS four other paintings that rated three stars on my checklist: “Giralda” (1956), “Before the Caves” (1958), and “Seven Types of Ambiguity” (1957). Centrally placed, and lording it over the others, was “Eden” (1956), the painting that Greenberg cited as testimony to Frankenthaler’s ability to create great art even when her private life might be in the dumps. In addition to its dulcet clarity and command, it was also a very funny picture, centering, as it did, upon two blue, slightly wiggly sets of numerals, two “100”’s on either side of the top center of the canvas. Each was set in the center of a huge tear drop, outlined in olive green and lined with a peach color—or perhaps these were breasts, or perhaps chemical retorts (gloriously multireferential, as was almost all of Frankenthaler’s best work, despite Elderfield’s pedestrian attempts to find uni-referential subject matter for it in his catalogue essay, and even though she herself may have thought she was being uni-referential). These enormous tear-drops, with the “100”s in them, inhabit what might or might not have been a sort of mystic garden, and the whole was limned in just four crystalline colors: peach, olive, medium blue and pale lime. What a monument of uncontainable magic was unloosed on the world by such iron discipline!