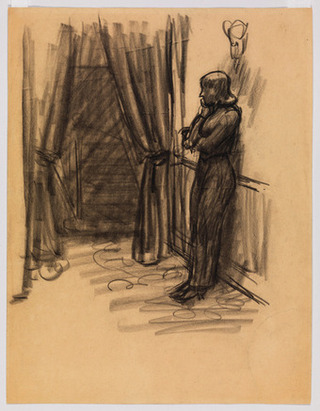 Edward Hopper (1882-1967). Study for New York Movie, 1938 or 1939. Fabricated chalk on paper, 10 7/8 x 8 3/8 (27.6 x 21.3 cm). Whitney Museum of American Art, New York; Josephine N. Hopper Bequest 70.140
The press officer at the New-York Historical Society, where I'd been to admire its Reginald Marsh show (now alas closed), asked if I’d seen “Hopper Drawing” at the Whitney Museum of American Art. This made me realize that this was a show I ought to see. I’d been putting it off because I’ve never been wild about Edward Hopper (1882-1967). I know he’s terrifically respected by at least some people whose judgment I in turn respect, but (aside from my long-standing prejudice against artists who persist in painting representationally in an abstract century), his paintings have always seemed to me oddly wooden—not a problem, when the subject of the painting itself is wood, such as a tree or a house, but definitely a problem when the subject is human. Still, I thought, I better check it out, since nearly every other show I’d seen in August deals with figuration in the U.S. during Hopper’s maturity. Boy, was I ever glad I did see this show. I can recommend it highly, though not for the reasons that the museum’s promotional staff is recommending it.

The show was organized by Carter E. Foster, drawings curator at the Whitney, based on his research into more than 2,500 works on paper by Hopper in the Whitney ‘s collection (all or most, I imagine, part of the huge bequest that Jo Hopper, the artist’s widow, made to the Whitney). The show is billed as “the first in-depth study of the artist’s working process,” and only the central gallery consists exclusively of Hopper drawings. Most of the rest of the third floor of the Whitney is divided up into smaller galleries in which one or more of the artist’s paintings are combined with preliminary sketches and drawings for those paintings (the exception, to the left of the central gallery at the entrance, offers paintings and mostly unrelated drawings dating from the artist’s early years in Paris). The show will be at the Whitney until October 6 (then at the Dallas Museum of Art, November 17 to February 6, 2014, & the Walker Art Center in Minneapolis, March 15 to June 22, 2014).

For me, the outlying galleries, combining preliminary works on paper with finished paintings, are the least rewarding part of the show. Some of the less familiar paintings are refreshing, but by and large the preliminary sketches and studies are only partial and mostly crude (the exceptions are the many studies that Hopper made of Jo as she posed for the usherette in “New York Movie,” one of the rare Hopper oils in which the figure looks natural). The gallery with the Paris work has some pretty impressionist-style cityscapes and hilarious caricatures of ladies with Edwardian hats, hairdos, bustles, etc., but they’re not a big surprise, as the Whitney staged “Edward Hopper: The Paris Years,” a likeable show, in one of its small “mezzanine” galleries ten years ago. The real surprise – and enormous pleasure – is the central, all-drawings gallery, which greets the viewer stepping off the elevator with two handsome self-portraits, plus three studies of the artist’s own hands, and “Hopper’s Hat on His Etching Press.”

To be sure, the studies of nude models that Hopper did while still in art school are a trifle wooden, but much less so than the figures in his later years, and the later drawings of other subjects are often truly excellent and deeply touching. A few in this particular gallery are only preliminaries, but many more are completely worked up: though they are often labeled as studies for this or that painting, they are fully realized works of art in themselves. Even though virtually all the rest of the drawings here are without people in them, the superb draftsmanship humanizes them. Hopper could take something as prosaic as the deserted platform of a railroad station or an underpass and make them almost literally throb with life. His sailboats fly before the wind. His houses, with all their Victorian gingerbread painstakingly rendered, come across as thoroughly inhabited. And all five studies of “Perkins Youngboy Dos Passos” suggest almost vehemently that this tightly-coiled sleeping cat could wake, stretch himself and stalk away at any moment.

In sum, I’d conclude that Hopper is greater as a draftsman than as a painter, and –at his best—a very great draftsman indeed.