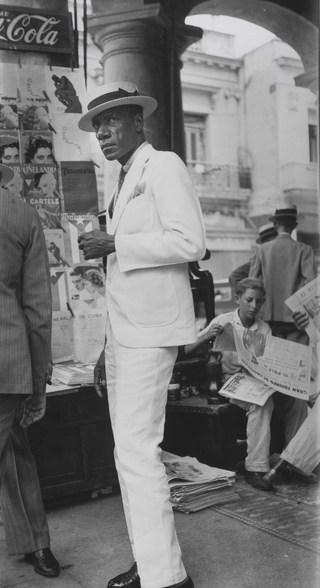 Walker Evans (American, 1903–1975). Citizen in Downtown Havana. 1932. Gelatin silver print. 9 3/8 x 5 1/16″ (23.8 x 12.9 cm). Lily Auchincloss Fund. Credit: The Museum of Modern Art.
For some reason, I seem to be wallowing in representational art this summer & autumn. But representational isn’t necessarily bad – just as abstraction isn’t necessarily good. In this case, we have two story-telling artists, and although narratives can be boring, I found these two with something to say.

By the later 1940s and 1950s, when Woodruff was based in New York, and teaching at New York University, he also was painting abstractly. But, unlike most of his abstract contemporaries, white as well as black, he already had a whole earlier career to look back upon—one, which in my opinion, qualifies him for the title of the first African-American modernist.

Born in Cairo, Illinois, Woodruff was raised in Nashville, Tennessee. He studied art at the Heron Art Institute in Indianapolis, the School of the Art Institute of Chicago, and the Fogg Museum School. Then, with the aid of an award from the Harmon Foundation, he went in 1927 to Paris.

There, he studied at the Académie Moderne with Henry Ossawa Tanner, an earlier expatriate African-American painter (whose retrospective at the Pennsylvania Academy of Fine Arts I reviewed in 2012). He also imbibed French modernism. He may have dabbled in cubism, but the works from this period for which he is best known are the muscular landscapes that reveal his great admiration for Cézanne—an artist who, even in the 1920s, was still pretty hard for a lot of people to take.

Returning to American in 1931, Woodruff became the first art teacher at Atlanta University (now Clark Atlanta University). He developed a whole department around himself, and also instituted a series of national annual exhibitions for black artists that continued until 1970.

Meanwhile his style evolved into a form of the regionalism so popular in the U.S. in the 1930s, combining the rhythms of Thomas Hart Benton with the mural techniques that he learned during the summer of 1936, when he mixed colors and prepared walls for Diego Rivera, the Mexican muralist.

The current show at NYU’s 80 WSE (through October 13) mostly focuses on Woodruff’s regionalist period, although it does contain one classy French landscape from 1928, a canny fusion of Tanner and Cézanne. The show is entitled “Rising Up: Hale Woodruff’s Murals at Talledega College,” and was organized jointly by Talledega College (located in Talledega, Alabama), and the High Museum of Art in Atlanta.

The murals in question are six in number, and all oil on canvas, but of a good size: about 6 feet high, and 10 to 20 feet in length. They were painted between 1939 and 1942 for Savery Library at Talledega (because they were temporarily taken down for cleaning and restoration, they have been available for travel). Like Clark Atlanta, Talledega is a historically black educational institution, and the murals are fighting statements, especially the first three, which tell the stirring tale of the Amistad mutiny of 1839.

Stylistically, these murals locate themselves at the junction of five different artistic traditions: besides Benton and Rivera, I see suggestions of native African sculpture (which Woodruff had discovered while still at Heron), “Mussolini Modern,” and WPA post office murals. Iconographically, however, the story is much simpler.

The first and most action-packed mural depicts the mutiny itself. It took place on board the Spanish schooner Amistad en route from Havana to Puerto Principe, Cuba, when 53 Africans, recently abducted from Sierra Leone, rose up against the captain and crew and seized command of the vessel.

The painting shows 11 blacks attacking and mostly vanquishing 5 whites. Each of the blacks is armed with a big machete, while the whites between them all have only one shotgun of some sort and one small pistol. A vigorous circular movement to the figures endows the whole composition with a lot of life.

The second mural takes up the story at a later moment. The mutineers had killed the captain and cook but spared the life of the navigator, on condition that he steer them back to Africa. He treacherously steered them north, not east, enabling the U.S Navy to capture the ship off the coast of Long Island and tow it back to New London, Connecticut.

There, the mutineers were thrown in jail, slavery still being legal at that point in Connecticut. The Spanish embassy wanted them returned to Cuba, but instead they were put on trial in Connecticut, and this is the subject of the second mural.

The prosecution argued that as slaves, the mutineers should have allowed themselves to be bound by the conventions governing conduct between slaves and masters, but the defense succeeded in establishing that although slavery was legal in Cuba, importing slaves from Africa was not.

The judge therefore ruled that the mutineers had been free victims of kidnapping and were entitled to try and escape any way they could. The composition here is much more stately, with the canvas much longer than it is high, creating a relaxed and very harmonious flow to the figures.

The third mural shows the return of the surviving Africans to Sierra Leone. A group of 35 arrived in 1842, along with five missionaries and teachers who intended to try and form a Christian mission. However uplifting the subject, the composition here isn’t quite as successful: it’s a little cluttered and disorganized.

Why is it, I wonder, that blood and guts, and/or judicial suspense are apparently so much more inspirational than happy homecomings? Whether we’re talking "The Third of May" or “Law and Order,” the darker side of human nature seems to inspire more élan.

The first show I saw at the Museum of Modern Art this summer was one I was looking forward to, and wound up being slightly disappointed by. It’s “Walker Evans American Photographs,” a show of approximately 60 prints from the museum’s collection that were included in the MoMA’s 1938 exhibition of Evans or its accompanying publication, that older show itself being billed as the first solo photography exhibition at MoMA (the current one will be up through January 26, 2014).

This show was organized by Sarah Hermanson Meister, a MoMA curator, with the aid of Drew Sawyer, a curatorial fellow, and has been installed in the second of those two small galleries normally devoted to abstract expressionism--thereby forming a representational bridge between a gallery with Robert Rauschenberg and a gallery with Warhol, Lichtenstein, etc.

The rationale here, according to the curt announcement in MoMA’s exhibition schedule, seems to be that Evans’ pictures of “signs and symbols, commercial culture and the vernacular” fit into this line of endeavor. Never mind that great abstract works are being consigned to storage in order to thus glorify pop artists.

To me, Walker Evans is the photographer of people par excellence—his most memorable work being in “Let Us Now Praise Famous Men.” But only about a quarter of this show is given over to pictures of people. Three-quarters of it is the various kinds of still-life arrangements focusing on building facades, posters, street scenes, and so forth.

Don’t get me wrong: many of these images are deservedly famous, while many others are unfamiliar but nonetheless memorable—and maybe half a Walker Evans is better than none. However, seeing so many of these still-life arrangements together, with so little introduction of the human element, tends to emphasize the extent to which Evans was an “art” photographer, and to undermine his truer qualities as a supreme storyteller.

If you can live with this caveat, you may enjoy this show—particularly since it isn’t entirely bereft of the human factor. Evans is so well known for his photographs of very poor and badly-dressed white people that we forget he could also do well-dressed white people, and both well- and badly-dressed black people. One of the images that I found most memorable in this show was his portrait of a very well-dressed, very dark-skinned Cuban gentleman—who could almost have been a descendant of one of those mutineers on the Amistad, if they’d been forced to come ashore.