KANDINSKY AT THE NEUE GALERIE 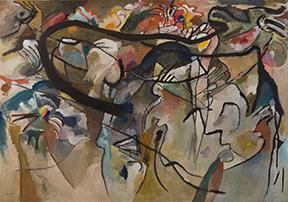 Vassily Kandinsky. Composition V. 1911. Oil on canvas. Private Collection.
Another grand show with extra appeal for modernists is “Vassily Kandinsky: From Blaue Reiter to the Bauhaus, 1910-1925” at the Neue Galerie (through February 10).

As organized by Dr. Jill Lloyd (an art historian who has already organized several shows for the Neue Galerie), this exhibition includes over 80 works, including paintings, drawings, watercolors and decorative objects.

Its official climax is a large-scale recreation of a room-size mural that was original created from Kandinsky’s designs by his Bauhaus students for the Juryfreie Kunstschau (Jury-Free Art Show) held in Berlin in 1922.

Indeed, the whole show is eerily fascinating. The first gallery combines early and late Kandinsky (one in sequence after the other). The early is also accompanied by frequently top-quality works from other artists associated in Munich with Kandinsky (during the period surrounding the publication of The Blaue Reiter Almanac in 1912).

Here are to be found both two very sweet Murnau street scenes by Kandinsky from 1908 and 1909, and two wickedly entertaining small watercolors by Paul Klee (from 1915). Additionally, one sees a majestic and expansive “The Large Blue Horses” from 1911 by Franz Marc (what a loss to the art world was his death in World War I).

Moving on, one sees examples of Kandinsky’s smaller, hard-edged abstractions from his Bauhaus period in the early 1920s, as well as the occasional Klee from this period. An amusing sidelight if provided by a jaunty little chair designed by Marcel Breuer for Kandinsky’s dining room in Dessau (1926). Klee is also represented by a lovely mostly-red painting from his Bauhaus period (1928).

I’ve never been a passionate fan of later work by Kandinsky, but I found myself liking some of these paintings better than I’d expected, with the stand-out being the large “Black Form” (1923).

Still, they were no match for the series of large paintings hanging in the large gallery at the west end of the building (backing up on Fifth Avenue, and with a wall text headlined “Beyond Easel Painting”).

This is a dazzling gallery, with a generous selection of the dynamic, and often deeply moving pictures that Kandinsky made at his peak, between 1911 and 1914.

During this period, if you believe Rose-Carol Washton Long, Kandinsky was making semi-abstract paintings with imagery derived from Theosophical treatises, including elders, walled cities, riders on horseback, and whatnot.

If you don’t go along with this iconography, these are merely the fluid, painterly, free and easy works from the artist’s first and happiest discovery of abstraction.

Facing the entrance to this gallery hang the four tall & exciting vertical panels sometimes known as “The Seasons” (1914). They were originally painted for the Park Avenue home of Edwin R. Campbell, an automobile tycoon.

Today, they’re owned by the Museum of Modern Art, but MoMA is too busy displaying every last whipstitch of Duchamp & his fellows to display all of these panels (in fact, one is lucky to see just one of them).

To the right of these four is the huge “Painting with White Border” (1913), owned by the Guggenheim Museum (and on view there at least some of the time).

But the real monarch of this ensemble is the darkly gorgeous “Composition V,” on the left wall of this gallery. Painted in 1911, it’s one of the first, if not the first, of this whole glorious sequence. The label says only that it’s from a private collection, but the owner can’t be too far from the museum, as I’m fairly sure I’ve had the privilege of seeing this painting here before.

The rest of the show, while admittedly highly interesting, is also a tad anticlimactic. The small gallery deals with Kandinsky, music and the theater, including costume and set designs for Mussorgsky’s “Pictures at an Exhibition,” and softly-playing music by the artist’s favorite composers, most notably Arnold Schoenberg.

At the other end of the floor is the recreation (at 2/3 of its original size) of the mural for the Jury-Free Art Show, occupying a whole, semi-darkened gallery of its own. While it was very ambitious of the Neue Galerie to attempt this recreation, the results look tame by comparison with the action and the grandeur of Kandinsky’s best work in that good old-fashioned medium of what – despite the wall text—remains easel painting.