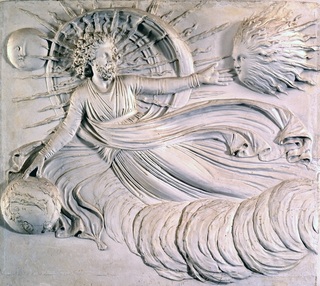 Antonio Canova (Italian, Possagno 1757–1822 Venice) The Creation of the World 1821–22 Plaster Gipsoteca, Possagno (Inv. 292)
The Metropolitan Museum of Art currently has two truly rewarding boutique shows. One is “Piero della Francesca: Personal Encounters” (through March 30) and the other is “Antonio Canova: The Seven Last Works” (through April 27). Piero is the greater artist; Canova’s exhibition is the more comprehensive display of his art.

Indeed, we are having a regular Piero della Francesco festival in New York these days, with the Frick Collection giving us their “Piero della Francesca in America” less than a year ago, from February to May 2013. (Is this just coincidence, or did the Frick get wind of the Met show coming up, and decide to schedule their own show in advance of it—or is this sort of speculation sacrilegious?)

Anyway, the more Piero, the merrier, as far as I’m concerned. I’ve been mad about the boy since I made his acquaintance in a stellar art history course on the Italian Renaissance, taught by the storied Julius Held, back when I was at Barnard. (I’d expected to get Botticelli, but somehow his name never came up—instead, there were these two great discoveries—Masaccio & Piero).

Born around 1412 and dying in the same year that Columbus set off to discover America, Piero was one of the supreme figures of the Quattrocento, even though he worked mostly in relatively unknown cities & spent relatively little time in Florence. The boldness and dignity of his figures only complements and enhances the anatomical accuracy and perspectival mastery with which they are rendered.

The current exhibition at the Met, organized by the museum’s Keith Christiansen and Andrea Bayer, has just four small to medium-sized paintings in it. All were originally intended as devotional images, for use in bedrooms or private chapels, as opposed to the more elaborate public images made for display in churches and cathedrals. With one of those superlatives so commonly found in press releases, this show is said to be the first of this kind for Piero.

Occupying a sizeable gallery that could easily hang 10 to 20 pictures of the same size, the four are instead surrounded by quantities of open wall space & museology – a panel of background information about the artist, a big map of Italy showing the cities where he worked, several panels on the restoration of one of the paintings, and a rack upon which are displayed several copies of the modest catalog, together with chairs so that visitors can sit down to read it.

One of the four paintings is a small Madonna and Child, with a perspectival rendering of a wine cooler on the back of it (in very poor condition). I have to confess that the wine cooler didn’t do much for me, but the Madonna and Child are very sweet—if somewhat lacking in individuality. The estimated date for the painting is ca.1439-40, when the artist was still a young man, learning his craft in Florence, and with his most distinctive work ahead of him. The painting comes from the Alana Collection in Delaware.

(I mean, I know pink for girl babies and blue for boy babies is supposed to be a 20th century merchandising ploy, and maybe the blue angel is supposed to be a cherub & the pink one, a seraph, since cherubim are traditionally rendered in blue, and seraphim, in red, but they don’t look like the cherubim & seraphim in other paintings I’ve seen of them, and there is the necklace & the armor to further indicate gender.)

The statuesque frontality and simplicity of the figures dramatizes their monumentality, and the pale, chalky palette employed suggests analogies to frescos, although actually the medium and ground are tempera and oil on walnut panel.

In its overall configuration, this picture resembles the centerpiece of the Frick exhibition, but that was a larger & much more elaborate Madonna and Child with four angels, all seen at nearly full length. And, while the Frick’s picture came from an American collection, the Senigallia Madonna is from the Galleria Nazionale delle Marche, in the ducal palace of Urbino.

It is believed that this painting was commissioned by the hawk-nosed Federico da Montefeltro, duke of Urbino, a celebrated patron of the arts and subject of a famous portrait by Piero. It is further believed that the duke gave it to his daughter Giovanna, either when she married Giovanni della Rovere, nephew of Pope Sixtus IV (in 1478, ) or, more likely, when she became betrothed to him (in 1474).

The Senigallia Madonna is a very impressive picture, but – as with the Frick show – I related more strongly to the two remaining smaller pictures, both of which depict St. Jerome, the 4th century scholar and ascetic (he translated the Bible from Greek & Hebrew into Latin). One, from the Gemäldegalerie in Berlin, is entitled “St. Jerome in a Landscape” (dated 1450) and shows the saint praying in the wilderness. He is kneeling on the right-hand side of the picture before what looks to me like a little rock altar. In back of him is a darling little lion, one of his attributes; beneath him lies another of his attributes, a red cardinal’s hat.

The bare arms of the saint aren’t that different in color from the altar behind him, making me wonder if their paint hasn’t become transparent with age, but the left side of the picture, showing a landscape with trees, blue skies and a shimmering river winding off into the distance, still looks spring-like and lovely. The catalog says that the copper resinate green the Piero used has oxidized, so that what now looks olive green originally looked brighter, but the change doesn’t destroy the charm of the picture.

My favorite of all four, though, is the “Saint Jerome and Supplicant” (ca. 1460-64), from the Gallerie dell’ Accademia in Venice. Though it measures only 19½” by 16½”, it portrays two fully formed figures—the saint, who is seated on a bench, to the left, holding a book in his hands, and the supplicant – who was also the donor – kneeling before him on the right.

The saint is wearing a white tunic, open in front exposing his chest, and signifying his basis in antiquity, while the supplicant is fully clad in 15th century costume. The rich red of his robes contrasts vividly with the paleness of Jerome’s skin and tunic, with the greens and browns of hills in the distance, with a walled city nestled in the middle distance, and with the blue skies overhead.

Lettering at the bottom of the picture says that the supplicant/donor was “Hier[onymus] Amadi Aug[ustini] F[ilius], or Girolamo Amadi, son of Agostino. He was a wealthy Venetian merchant in the silk and textile trades, and Jerome was his patron saint (“Hieronymus” is Latin for “Jerome” and “Girolamo” is the Italian form of the same name).

Antonio Canova (1757-1822) isn’t as well known and widely admired as Piero, but to 18th and19th century art historians, he is a familiar figure, greatest of the neoclassical sculptors. He is best known for his pure white marble sculptures related to the Greco-Roman tradition—gods and goddesses, nude or only lightly clad, as well as portraits of contemporary celebrities, the women like as not wearing the gauzy neoclassical fashions of the day.

This exhibition, however, as organized by the Met’s own Peter Jonathan Bell and Paola d’Agostino, focuses on an unfamiliar side of Canova’s oeuvre: the religious—and, at that, Christian—side.

With only one large wall text & seven discreet labels to situate the show in a museological setting, the show is a visual delight for anybody who would rather look at art than labels & wall texts. (This is to say, me, though Ken Johnson, who reviewed this show for the NY Times, was dismayed by the lack of nude ladies; religion, I guess, just isn’t his thing.)

On view are seven large plaster low reliefs--perhaps 5 feet high & 6 feet wide-- created by Canova for the Tempio Canoviano. This is the church that the artist designed and built (at his own expense), and that later became his mausoleum, in his hometown of Possagno (in northern Italy, about two hours’ drive northwest of Venice).

It’s an odd building, with a portico reminiscent of the Parthenon, a dome reminiscent of the Pantheon, and an apse reminiscent of Christian churches. The seven reliefs were intended to be part of a series of 32, to be set as metopes into the frieze of the portico. Between December 1821 and April 1822, the artist was only able to model seven in clay and cast them in plaster before he died; their marble versions – in the Tempio itself – are the work of students.

However, 6 out of the 7 plaster casts in this show were the ones made by Canova himself (or at least under his direction, and from his clay models). Thus they are as close as we are likely to get to the artist’s touch and intent. They come from the Gallerie dell’Accademia in Venice, while the seventh, which comes from the Gipsoteca in Possagno, is a second set cast from the now-lost original.

Actually, the later copy is of the first subject in the sequence: it depicts God creating heaven and earth (earth -- down in the lower left-hand corner of the relief -- being a nice little Enlightenment-era globe, with Italy featured prominently on it). Next comes God creating Adam, Cain killing Abel, and Abraham attempting to sacrifice Isaac (until he is stayed by the hand of God). These four subjects come from the Old Testament (specifically, Genesis).

The next three reliefs are from the New Testament: The Annunciation, the Visitation (where Mary, while pregnant, visits Elizabeth, who is pregnant with John the Baptist), and finally, The Presentation in the Temple (where Mary brings baby Jesus to the temple and is seen by Simeon, who recognizes him as the Messiah).

Those last six reliefs highlight the classical purity that Canova was famous for, the severity he was capable of and the simplicity. Five are centered around just two figures, locked in relationships that can be either inspiring for their serenity (as with the Annunciation and the Visitation) or passionate and upsetting (as with Cain killing Abel, and Abraham sacrificing Isaac).

Retrograde as I am, I liked the first relief best, God creating heaven and earth. Even if it isn’t as refined and elegant as, for example, the Annunciation, it has more energy—and, having it, helps to demonstrate the wide range that Canova – and neoclassicism in general – were capable of.