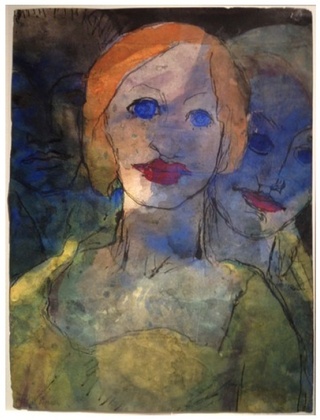 Emil Nolde. Phantasie (Drei Köpfe) (Imagination (Three Heads)), 1931-35. Watercolor, graphite and ink on Japan paper, 16.14 x 12.01 inches (41 x 30.5 cm). ENo 106. Courtesy of Van Doren Waxter and Beck & Eggeling
This bloody winter has gotten everybody down. I am so sick of snow I could scream, and, because I can't be sure of my footing in all the ice and slush, I've gotten out to only a few shows. However, one was “Emil Nolde: Expressions in Watercolor” (through February 28). And I don't regret that.

I’ve been a fan of Nolde’s for a very long time— since early 1967, right after I started writing the Art page for Time. Someone who knew a lot more about art than I did (most likely, my editor, Cranston Jones) sent me up to Boston to look at a Nolde show there, and to pick out some pictures that we could photograph and reproduce in color (color photography in newsmagazines still being a big deal in 1hose days).

I was entranced by the color & the fluidity of the Noldes that I saw, the vivid, flaring flame-like reds, oranges and blues. I had much the same response when I saw the invite for “Emil Nolde: Expressions in Watercolor,” since it features just such another wonderfully-colored little picture, with fluid, almost abstract shapes.

The invite came from Van Doren Waxter, successor gallery to Greenberg Van Doren, and located for the past year or so at 23 East 73rd Street. The “Waxter” partner is Dorsey Waxter, and, as she’s an alumna of the André Emmerich gallery, she has to have good taste. Still, although I’ve always looked at the invites she’s sent me, this was the first show at this new gallery of hers that I really wanted to see.

Nolde, a German Expressionist who was born in 1867 and died in 1956, represents a departure from the usual sort of artist that this gallery has so far given major exposure to (American modernists from the 50s onward who don’t interest me terribly, like John McLaughlin and Sam Francis). Yet in his way Nolde was more modern than many of them, not such a departure after all.

The Nolde show is offered in conjunction with a Düsseldorf gallery, Beck & Eggeling. There is a handsome catalogue, with an introduction by Dr. Christian Ring, director of the Ada and Emil Nolde Foundation in Germany, and an essay by Jeffrey Hoffeld, an independent scholar with a private art gallery in Manhattan.

FROM DIE BRÜCKE TO DEGENERATE – AND BACK

The artist himself was a complex and intriguing character. He is arguably the greatest member of Die Brücke, the northern branch of German Expressionism, which was founded by Ernst Ludwig Kirchner, Karl Schmidt-Rottluff, and two fellow architecture students in 1905, and flourished for a few years in and around the city of Dresden.

(The southern branch of German Expressionism, led by the more internationally known Klee & Kandinsky, flourished around the same time in Bavaria). However, by nature Nolde was a cantankerous loner and individualist, so his association with Die Brücke lasted only a year or so.

In the later 1920s, being conservative in his politics, he was to join the Danish branch of the Nazi party, but that association came to an even sorrier end. When the Nazis took over Germany in the 1930s, they decided that his art was “entartete kunst,” or “degenerate art,” and confiscated 1,052 examples of it from German museums (more than they confiscated by any other artist).

Nolde’s story, though, begins earlier and ends later than those two major episodes in it. The artist was born Emil Hansen in the town of Nolde in northern Schleswig. This region at his birth was part of Otto von Bismarck’s greater Germany, but many of its residents seem to have been Danes, and it was awarded to Denmark after World War I, by the Treaty of Versailles.

The artist’s parents were conservative, devoutly Protestant Danish & German peasants. He himself trained as a craftsman in the 1880s, making his living as a woodcarver and in a furniture factory while he was in his 20s.

In his 30s, he finally gravitated toward a career as an artist (fulfilling a childhood dream). In the late 1890s and early 1900s, he studied painting privately. Visiting major cities in Germany and France, he familiarized himself with the impressionism (and postimpressionism) of Paris (one of his heroes was Van Gogh).

In 1902, he married Ada Vilstrup, a Danish actress, changed his name to that of his hometown, and settled for part of each year in Berlin, where he painted the night life of the capital, studied indigenous art in the Volkskundemuseum (folklore museum), and exhibited with some key art exhibitions of the day, among them the Berlin Secession from 1908 to 1910, and the Blaue Reiter in 1912.

Like Die Brücke, the Blaue Reiter group (and, for that matter, the fauves & cubists of Paris) prized the more abbreviated, blunter style of what was then known as “primitive” art: art created by tribal peoples in Africa, North America, Polynesia, and Melanesia.

Other prized sources for all of them included children’s art, the art of schizophrenics and European folk art. Nolde excelled in creating such seemingly free, loose shapes and “barbaric” colors—not only when he worked in oil or prints (etchings, woodcuts and lithographs), but more especially in his watercolors.

In addition to suggestive scenes of women and/or nightlife, he painted religious scenes (both Christian and pagan), landscapes and figure studies. His flower pictures (which reflect his admiration for Van Gogh) have become very popular, and go for high sums at auction.

By 1913-14, Nolde was well established. With his wife Ada, he traveled overland via Russia to German New Guinea, accompanying a German colonial expedition: many works came out of these travels. In 1927, he and his wife moved to Seebüll, which again is in northern Germany, not far from the Danish border. There he designed and built a daring modern house for himself, in the Bauhaus tradition.

After the Nazis declared his work “degenerate,” he was confined to this home, and forbidden to paint. He continued to do so anyway, producing a wealth of mostly smaller watercolors, which he called “unpainted pictures.”

After the war ended, he regained much of his earlier renown, being awarded the German Order of Merit, West Germany’s highest civilian decoration. He died in Seebüll, and is buried next to Ada on the grounds of their estate: it is now the site of the Ada and Emil Nolde Foundation, and a museum for his art.

NOT A BIG SHOW BUT A VERY GOOD ONE

The show at Van Doren Waxter is far from being the definitive Nolde retrospective that I suppose I was somehow unconsciously hoping for, but there’s enough here to give a good idea of the remarkable talents of this artist. Included in all are about 15 pictures. The biggest (and least interesting) is a lithograph (in blacks and grays). The rest are all watercolors. This is all to the good, as the artist excelled in this medium.

The pictures range in size from very small (about 5 x 4 inches) to not very large (approximately 24 x 28 inches), but the color is uniformly memorable. In date, they range from 1908-10 to 1950-52, but their high quality is maintained from first to last.

This show contains no night life or religious pictures, but it does have figure studies, landscapes and paintings of flowers. Among the flower paintings, the one I liked best was the undated “Garden Flowers,” with its startling color and fuzzy outlines.

The prize among the landscapes is actually a seascape, full of rich, full, flowing and (for all practical purposes) abstract forms (this is the painting that’s on the invite). Its title is “Sea Watercolor with Steamers (red, yellow, blue),” and it wasn’t executed until 1946.

The figure studies offer a range of provocative images. Several, with mysterious titles and subjects, are dated 1938-45. They must be among the “unpainted pictures” that Nolde made when he was, effectively, under house arrest.

The earliest picture in the show is the small “Standing Girl” (1908-10). It depicts a figure that somehow manages to seem monumental, seen from the back, with orange hair, a white robe or shift, and blue surrounding areas.

The next earliest picture – and one that stood out for me – is “Young Woman with a Big Hat” (1910-11). This is the smallest work in the show; it engagingly presents a lady in a red dress with a big blue hat – beneath which luxuriates big brown hair.

A third strong painting is “Imagination/Three Heads” (1931-35). This one superimposes the heads and shoulders of three women. The most prominent and fully-realized one is in the center, with two more shadowy ones in the background, to the right and left. The central one has big blue eyes, big red lips, orange hair and a yellow dress, while the bluish tint to her skin – and that of the other two figures also – lends a dreamlike, haunted quality to the image. Everything is very definitively outlined.

This is the only painting in the show whose label concedes it was made with graphite and ink in addition to watercolor. But the precise details of the outlines – and the way that they almost miraculously cleave to the edges of the different color areas in the painting – contrast with the common claims of the German Expressionists – and particularly with the claims of Die Brücke – that their art was made quickly and freely, that it was not only “expressive” but “spontaneous.”

Expressive, I entirely agree. But spontaneous? To me, it’s pretty obvious that after the first fine careless rapture, a lot of care and dedication went into making these little pictures as perfect as possible.

“Young Woman with a Big Hat” also contains a lot of fine black outlines, though according the label, these are all watercolor. Nolde seems to have allowed the colors in the image to dry before applying the very carefully-delineated black outlines with very fine brushes.

But hey, he trained as a craftsman originally, and the detailed work he must have put in here only demonstrates the old saying that genius is one-tenth inspiration and nine-tenths perspiration. Would that more artists --past & present-- realized this.

Yes, genius is a necessary condition, not a sufficient one. I believe that genius is not the only necessary condition as well. There must be a community that is close by, that prods, pushes, and provokes genius to do more than simply perspire. The perspiration must be inspired, and self-inspiration seldom works. I say this despite the assumption many artists make that they are the beginning and the end.

Yes, at some point an artist needs a congenial milieu, and Nolde got that both in Dresden & in Berlin. But how about the years when he was living under virtual house arrestin Seebull, which is a hell of a long way from anywhere -- yet still managed to produce much fine work?