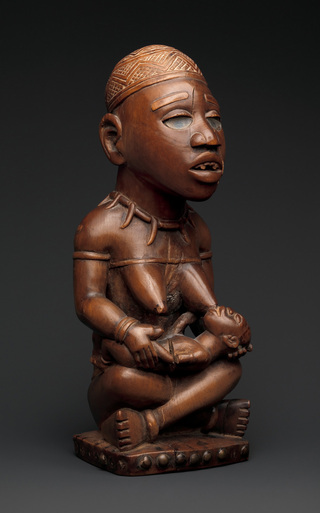 Master of the Boma-Vonde Region, Power Figure: Seated Female Nursing Child (Nkisi) Kongo peoples; Yombe group, Democratic Republic of the Congo, Republic of the Congo, or Cabinda, Angola, 19th–early 20th century Wood, metal, kaolin, glass H. 111⁄8 in. (28.3 cm), W. 41⁄4 in. (10.8 cm), D. 41⁄4 in. (10.8 cm) Steven Kossak, The Kronos Collections, New York Photo: Courtesy of The Metropolitan Museum of Art
At The Metropolitan Museum of Art is “Kongo: Power and Majesty,” an exhibition of 119 works by Central African artists from between the 15th and 20th centuries. This handsome show may give viewers the chance to see African work they have not seen before--but they'll have to hurry, as it closes on January 3, 2016.

All the African art in this show was made by Kongo peoples, who – when the first Europeans came exploring in the late 15th century – had lived for centuries in lands that are today part of three countries.

I’m no authority on African art, but I took one course in it at graduate school, and have read about Matisse, Picasso and other early modernists’ involvement with it.

I’d say that almost all the African art I’ve seen in these two contexts came not from the area dealt with in “Kongo” but from areas to the north and west of it: Dogon and Bambara art from Mali, Dan from the Ivory Coast, Fang from Cameroon and Gabon, Baga from Guinea, Bakota from Gabon, and the Ife & Benin bronzes from Nigeria.

Except for Cameroon, which was a German colony before World War I, and Nigeria, which was British, all the countries I just mentioned were French colonies during the latter half of the 19th century and the early 20th century.

Picasso, Matisse and other Parisian artists who became interested in “l’art nègre” would have been seeing African art brought from those French colonies, as opposed to the art of those Kongo peoples living farther south.

The only overlap that I’ve seen were some Vili sculptures that attracted Picasso and Matisse – the Vili peoples being a subset of the Kongo originally centered about the ancient kingdom of Loanga, in what was the French Congo.

Why my grad-school professor should have focused on the art of these other African peoples, and devoted only a small part of the course to Kongo art, I can’t say, though I do see differences between the art of West Africa and that of Central Africa, even among works that were made at more or less the same time.

In general – and, I’m sure, with many exceptions -- West African figures tend to be more slender and graceful, while those of Central Africa tend to be chunkier and more solid.

“Kongo” starts off with a dazzling selection of luxury textiles and delicately-carved oliphants (wind instruments made from elephant tusks). Both decorated with abstract (non-figural) designs, they were intended for display not use, were given to high-ranking Kongolese, and were sent as gifts by Kongo monarchs to monarchs and other influential persons in Europe.

Some Europeans who received them inventoried them, so they can be securely dated to the 17th and 18th centuries.

The first part of the second gallery exhibits works that may (or may not) date to the same period: small metal African crucifixes and other devotional Christian images made after European models (with African modifications).

Documents here (European books and manuscripts) indicate that Kongo monarchs and many of their subjects converted to Christianity after the arrival of the Europeans.

However, the rest of the exhibition consists of intriguing objects that are concerned instead with indigenous religion(s). Most (though far from all) of these objects are made primarily from wood or other perishable materials.

Almost everything is dated 19th and/or early 20th century—this being the period when European traders, scientists and soldiers were becoming interested enough in such work to acquire it and bring it home with them (as nearly as I can tell, everything on view at the Met is from European and American museums & private collections).

There are haunting masks employed by “ritual specialists” or priests (nganga; pl. banganga), as well as ceremonial drums and sculpted headboards for use in marriage rites.

Many tender works depict a woman, most often with a baby, and are displayed from the second part of the second gallery to the first third of the fifth.

Small versions of this motif are seen in the exquisite finials on the “prestige staffs” carried by high-ranking civil officials. Larger, gentler and even more appealing versions appear as freestanding figures intended to surmount burial places.

Designed as receptacles for powerful substances hidden in their stomachs and/or behind their eyes, they were meant to repel invaders and protect believers. Into their fronts are driven many nails or other pieces of metal, each for some problem solved with the intercession of the figure.

My only problem with this otherwise fine show is that its wall texts & labels suggest that the figures of the nursing mothers came into being solely in response to the depopulation caused by the 17th & 18th century slave trade, and the power figures were dreamed up to withstand the 19th century European colonial invasion (suggestions taken as fact by Holland Cotter in the New York Times).

I’d argue that it's far more likely that both concepts originated centuries before the Europeans arrived, though as neither objects nor written records have survived long enough in this moist tropical climate to document either viewpoint, we can never know for sure.