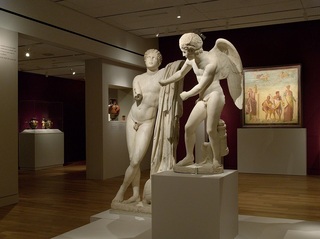 This mini-kunsthalle seems to be a secret shared by an increasing number of New Yorkers, hidden away as it is in the basement of Olympic Tower, a 51-story skyscraper located just off Fifth Avenue, across 51st Street from St. Patrick’s Cathedral.

Nevertheless, this center frequently houses museum-quality exhibitions in luxurious surroundings, and the present one is no exception, with more than 130 splendid examples of the glory that was ancient Greece, handsomely installed.

There are wall paintings, vase paintings, free-standing sculptures and grave steles done in relief, theatrical masks, amulets, coins, votive offerings & humble potsherds -- all assembled from top museums including the Met, the British Museum, the Louvre and the Vatican on through dozens of museums and archaeological sites in Greece itself.

In theory, at least, this show is designed to show the full range of human emotions as the ancient Greeks understood the term, from the wrath of the gods to the passions of human lovers, the sadness of mourners, the joys of childhood, and so on.

But anybody who comes to this show looking for facial expressions of such emotions will be disappointed. True, at the entrance, one is greeted by a row of heads, mostly smiling and with one scowling tragic mask. But after that, the predominant expression is serene (unless, of course, the work is from the Archaic period, in which case you get that delightful archaic smile).

You can always read the labels and accompanying literature in order to find out what scholars say is going on. Or you can do what I did, which is simply wander through the exhibition and enjoy the visual pleasure to be derived from an era when “beautiful” meant “beautiful” as defined throughout most of Western civilization’s history (and even by quite a number of ordinary art-lovers today, as well as those hardy souls who stand by modernist abstraction).

One especially nice aspect to this show is the fact that – as indicated by its dates – it covers a nice long period in temporal and stylistic terms. Thus it begins with the Archaic period, whose noble simplicity I have always responded to (though I know that in historical terms it has little in common with the present).

Equally nice is the fact that because this show continues on up to the early Roman period, it is not afraid to include Roman copies of Greek originals, and Roman renditions of Greek themes.

Roman handiwork may not be quite up to the high standard set by the Greeks, but on the other hand, being one or more centuries newer, it may be in better condition—even large examples of it.

Thus I am happy to be able to include, as my illustration, the centerpiece of this good-looking show, with two big Roman marble statues in the foreground, and a wall painting from Pompeii—a Roman town -- in the background .

The painting shows Iphigenia, the daughter of Agamemnon, being sacrificed in order to bring good winds to enable the Greeks to sail to Troy. Agamemnon is supposedly overcome with grief, though to my 21st century American eyes, he looks only mildly irritated. Still, the colors are lovely, and the drawing, elegant.

The two graceful statues are both copies of Greek originals, and show two deities who personified emotions. The one on the right is Eros, the well-known god of love, stringing his bow so that he can shoot his arrows into the hearts of gods or mortals, and stimulate them to desire.

The other, larger figure is of Pothos, a less well-known god, said to be a brother or a child of Eros, and the god of longing for something lost, or distant. How appropriate a symbol for our times!