MARVILLE AT THE MET 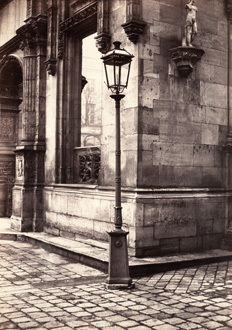 Charles Marville, Lamppost, Entrance to the École des Beaux-Arts, ca. 1870. Albumen silver print from glass negative. Collection W. Bruce and Delaney H. Lundberg
I often wonder why I am so much drawn to photography these days. I guess it is because I do like representation, and I see so little contemporary painted representation that has the freshness of the best photography—though what I consider fresh & the best photography might strike the average contemporary camera buff as laughably quaint.

For instance, I liked "Charles Marville: Photographer of Paris” (at The Metropolitan Museum of Art through May 4; previously at the National Gallery of Art in Washington, whose Sarah Kennel was its original organizer; three of the Met's curators were responsible for the presentation in New York). This full-dress loan show displays about 100 photographs by a Parisian photographer hired by the city of Paris in 1862.

The assignment of Charles Marville (1813-1879) was to document the old, even medieval streets and buildings about to be demolished. They were to make way for the grand new avenues and modern buildings built according to the programs of Baron Georges-Eugène Haussmann, principal city planner for Emperor Napoleon III.

He photographed the outskirts of the city, showing empty lots, and gypsum mines. There’s little if any farmland in his pictures, but to the best of my recollection, there was still some of it, even in the early 20th century (I say this upon the basis of research I did into the Montmartre of Analytic Cubism).

To me, Marville’s shots of the outskirts of Paris come across as hopeful--a sign of times to come, potential still to be realized (I didn’t buy into the Met’s gloomy pomonian labels muttering about urban alienation).

I was also very taken by Marville’s marvelous photographs of the new gas street lamps. The row of these photographs makes the street lamps into a parade of delicate and individualistic sentinels.

Marville’s photographs of the old Paris faithfully record it, but streets & buildings often don’t look that old or medieval to me. Among exceptions are the Place Saint-André des Arts, its irregular jumble of buildings ornamented with the large lettering of advertisements; and the tanners’ workshops alongside the little Bièvre River, a tributary of the Seine that now runs underground.

(The shot of the 6-foot-wide Rue du Chat-qui-Pêche chronicles a piece of medieval Paris that still exists.)

Marville was a faithful journalist, and a dedicated chronicler of what he saw, but his form of expression is prose by comparison with Eugène Atget (1857-1927), who was the poet of the two. Coming along a generation after Marville, Atget undoubtedly learned from him, but then he somehow soared.

How well he succeeded in recapturing the mystery & wonder of what was left of Old Paris can be seen by the wall full of his photographs in the adjoining group show at the Met. It is entitled “Paris as Muse: Photography, 1840s-1930s,” and was organized by Jeff L. Rosenheim (through May 4).

The show, which consists of about 40 photographs, all from the Met’s permanent collection, focuses on architectural views, streets and interiors. Among the other distinguished photographers represented here, I am happy to say, are two eminent Hungarians, André Kertész and Brassaï (real name: Gyula Halász—no relation to me, alas; it’s a fairly common Hungarian surname, translates as “Fisher”)