SUMMERTIME IN THE GALLERIES 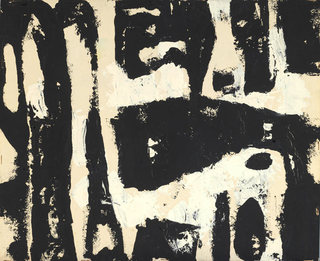 Charlotte Park (1918-2010), Untitled (Black and White), ca. 1950. Oil and gouache on paper mounted on canvas, 14 7/8 x 18 in. Courtesy Berry Campbell.
Summertime, and the galleries (both commercial & non-profit) opt for group exhibitions, of which I have seen three that I liked: at Loretta Howard, Berry Campbell & The New York Studio School of Drawing Painting & Sculpture…while patrolling Chelsea I also happened upon a solo exhibition that I sort of liked, that of a British artist named Peter Joseph.

Peter Joseph (b.1929) is showing at Lisson on West 24th Street (through August 11). Google doesn’t seem to think of him as awfully well known, but he has been exhibiting with Lisson ever since 1967, and has made whatever name he has made for himself as a minimalist, not a modernist.

However, in this latest show he appears to be mellowing into a modernist, with medium-sized collages and larger acrylics on cotton duck. Upon these appear just a few airy rectangles or bars of color, especially blues in various shades, plus light greens, yellows and soupçons of other colors. They are very pleasant – kind of color-field Lite.

Sometimes, to be sure, I found his compositions rather simple-minded. On other occasions, they were awkward or too busy, but much of the time they were just right. Two in particular that stood out for me were “Light Orange, Green, Blue, Lemon, Mushroom, Turquoise” (2016) and “Pinks, Dark Blue and Brown” (2017).

”Summer Review” (through August 11) at Loretta Howard begins with a very nice untitled 1978 collage by Robert Motherwell, centering upon a musical score. There is also an attractive smallish Cleve Gray acrylic on canvas, “Conjunction #98” (1976), with a blue field framed by a darker blue and a black blob in the center.

Gray (1918-2004) was never that well-known during his life, either, but he moved in color-field circles, being married to Francine du Plessix Gray, a distinguished author who was the stepdaughter of Vogue editor Alexander Liberman, and if memory serves correctly, she was also a close friend of Helen Frankenthaler.

Indeed, Frankenthaler’s ghost hangs over another painting in this show, a sprightly 1961 one entitled “Sacrifice” by Friedel Dzubas. Other goodies here include a rectangular untitled 1978 Kenneth Noland on handmade paper, with a small yellow & maroon target in the midst of pale green field.

For a final fillip, there is a nifty untitled Larry Poons from 1972, with a field of golden orange, pink and magenta.

“Summer Selections” (through August 17) at Berry Campbell is a joyous time, with a big show of 29 works when I was there. Represented were 28 different artists. “This is our time of the year to make everybody a little bit happy,” explains Christine Berry.

Not least among the works guaranteed to make gallery-goers happy, too, is an untitled Larry Zox near the entrance, with a big white field in the center and luscious vertical stripes on either side (ca. 1973). Over the desk in the office space is a dandy through restrained William Perehudoff, “AC-91-023” (1991).

Dominating the first large gallery space are two big, bold paintings. One is “Cherokee Blanket #1” (1960) by Darby Bannard, a minimal square with pale pink in the center and a narrow band of darker pink around the perimeter. The other is “Good Morning” (1969), by Pat Lipsky, a series of horizontal waves of color that makes it look like big sister to “Springs Fireplace” (1969), the illustration I used in my April 19 posting reviewing Lipsky’s show at Gerald Peters.

Further toward the back is a tall, voluptuous Stanley Boxer, “Screamtowhere” (1995), mixed media with pale greens, browns, tans and creams (to say nothing of darker little blips and drips). Another winner is “Wave Quartet” (2016), by Jill Nathanson, a sound poem red and greens.

Well worth a mention is “Dark Blue Column” (2016), by James Walsh. His spouse, Ann Walsh, has also made small rectangular columns, but this one could only have been made by James Walsh, as it is covered with his signature swabs and blobs of molding paste and his painterly palette of mixed & blended frosty blues, grays & whites.

At the very back of the gallery are a group of nine small works (including the second Perehudoff). They have lots of distinctions of their own, not least the 1935 untitled Balcomb Greene, mixed media on paper, and an untitled but charming black and white Charlotte Park (c. 1950), oil and gouache on paper.

In addition to being a painter herself, Park (1918-2010) was the wife of James Brooks, another second-generation abstract expressionist. The two of them lived just down the road from Lee Krasner & Jackson Pollock, another husband-and-wife artists’ team.

In the late 1990s, I visited Park and interviewed her about her illustrious neighbors (this was in the early stages of preparing “A Memoir of Creativity,” when I was still planning to write a more art-historical book). Park’s beautiful black and white oil and gouache in the Berry Campbell show reminds us how close the two couples must have been.

LAST BUT NOT LEAST, THE NEW YORK STUDIO SCHOOL

Here, at the New York Studio School of Drawing Painting & Sculpture, the show is not “summer selections” but a full-fledged group exhibition of 82 artists that fills its usual gallery space and also overflows into the school’s entry hall, the 2-room studio space to the right of the entry hall and even a tiny little appendix-like space up a few narrow steps at the far end of the second of these two rooms.

The occasion is the school’s “2017 Alumni Exhibition,” with 68 works by former students selected by three sets of jurors, plus a special exhibition devoted to “Founding Faculty & Key Influences” (both shows through August 27).

The lion's share of the work is paintings, though with a generous smattering of works on paper (both unique pieces and multiples) and a further smattering of ceramics and other small sculpture. And I found a wide range of styles and forms of expression, as well as great variety & ingenuity in both media and grounds.

Isn’t it a relief to know that there is still an art school in New York that helps students to express themselves in more traditional media, as opposed to the fashionable trends!

(To be fair, you can also get good instruction in traditional media at the Art Students League, but as I understand it, the League doesn’t offer a rounded curriculum that leads to a degree.)

The three sets of jurors at the Studio School’s exhibition, all from different galleries, were 1) Florence Lynch of Elizabeth Dee; 2) Anders Bergstrom of Hauser & Wirth; and 3) Steven Harvey & Jennifer Samet, respectively of Steven Harvey Fine Art Projects and Eric Firestone.

Predominantly but not exclusively, the work is representational; there are also a number of abstractions. Blessedly, there are no conceptual pieces with a lot of writing in them; one doesn’t have to read a lot (except the model checklists, should one so desire).

Inevitably, I liked some works in this juried section of the show better than others, and I want to mention all of those that I particularly liked. However, as there are 34 of them in all, I can’t devote more than a phrase (at most) to each.

So, then, here are my selections, in the order that they appear on the three checklists.

Selected by Lynch: a “Procession” (2015) of elephants by Flavia Bacarella; “Silas” (2017), a figure study of a man reading by Isabel Barber; “Fields #1” (2017), a painterly abstraction of horizontal stripes by Billy Hertz; “Untitled 3” (2017), a gouache by Jayne Holsinger, showing a helmeted motorcyclist in a landscape; and “October Surprise” (2016), an oil by Teresa Jarzynski, depicting a seated, long-haired man.

Also: “Tree in Pomerania” (2015) by Kevin Knopp and “Small Daffodils” (2010) by Marjorie Kramer, both paintings depicting what their titles suggest; “Desdemona” (2017), a magical portrait study by Carl Scorza; “Sandy” (2016), by Matilda Shepherd, essentially an abstract which may or may not show a sandstorm with a glowing sun in its center; and “Estuary 10” (2016), a seaside landscape by Steve Singer.

Selected by Bergstrom: “Tonal study of a fig tree beside tool shed” (2014-15), an oil and shellac on paper by Michael Bransfield; a small & narrow steel vertical mysteriously called “This Comm-Links Lost Its Frequency II” (2017) by John Erianne; “NYTimes Recycling” (2008), one of my favorite still lifes by Cara London; “Flowers” (2017), more specifically marguerites in colored pencil by Jack Lovell; and a semi-abstract landscape by Barbara Marks entitled “Recollection No. 80 (Wyoming)” (2017).

Selected by Harvey & Samet: “Cold Summer #33” (2012), an abstract pigment print by Rosaire Appel; “Donegal Dave and the Edge” (2017), a precipitous abstract landscape (?) by Sasha Chermayeff; “Guitar” (2017) by Robert Franca, a surrealistically warped little white musical instrument that projects out from the wall; “April 11” (2017), an interesting little ceramic by Celia Gerard; and a curiously off-center abstract oil by Elizabeth Hazen called “Broadway and Metropolitan” (2017).

Also: an oil showing the artist with a dog by Marjorie Kramer, which is entitled “Self-Portrait with Frieda” (2014); “Head of a Young Prince” (2017), a provocative ceramic by Mark Lariviere; an oil by Adrianne Lobel depicting the humanoid front of a “truck” (2016); a tapestry-like oil on canvas by Patrick Neal entitled “Snowy Owls with Alliums” (2017), and a Matissean reclining nude by Betsy Podlach called “Nap on Rosebud Sheets with Bunny” (2016).

I tend to associate Steven Harvey Fine Art Projects with representational painting, yet here its proprietor went big for abstraction. This might have surprised me, did I not know that back in his youth, Harvey toiled in the vineyards of Salander O’Reilly.

Finally – and I’ve saved some of the best for last – at the back of the gallery to the left of the entrance is modestly situated the special exhibition of “Founding Faculty and Key Influences.” The work by some of the big names here left me calm, but I was very taken by “Rachel Zurcher” (1961-62), an unusually sincere portrait by Alice Neel.

Hans Hofmann is here, too, with a couple of modestly-scaled paintings, both abstracts. The better one is an elegant pink, black and white untitled gouache and ink from 1944.

The checklist lists Miller (b. 1930) as a “key influence,” and I gather that she taught for many years at the Studio School. I would hope that at her age she is now retired from teaching, but she is apparently still exhibiting, with a show currently on near her home in Connecticut.

O’Connor (b. 1943) is listed as a “co-founder,” but it turns out that this wasn’t as a teacher. Instead, he seems to have been one of the original group of students at the Pratt Institute in Brooklyn who back around 1964 went to Mercedes Matter , who was teaching there, and asked her to set up a better art school, where they could learn what both she and they thought they should learn.

The result was the founding of the Studio School, with Matter as longtime head, and O’Connor continuing his studies before going on to a painting and teaching career of his own.

In this show, Matter (1913-2001) is represented by two paintings, both semi-abstract, semi-cubist still lifes ---- very complex, very detailed. The one I thought quite lovely was the “Tabletop Still Life” (ca. 1938). It is maybe not the greatest painting ever made, but without its creator, there would be no Studio School, so it very much needs to be here.

The daughter of Arthur B. Carles, the Philadelphia avant-gardist, Matter absorbed the most advanced artistic theory and practice from her childhood up. In the early1930s, she came to New York and studied with Hofmann (before Lee Krasner did).

She married Herbert Matter, a Swiss-born photographer, and left New York with him to settle from the early 40s onward in East Hampton. Like Charlotte Park and James Brooks, the Matters lived just down the road from Lee and her hubby Jackson.

I visited Matter and interviewed her, too, at about the same time that I interviewed Charlotte Park. She was a very nice woman, and I’m sure an inspiring teacher.