FUTURISM AT THE GUGGENHEIM 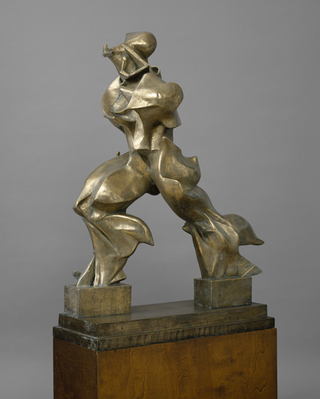 This is the kind of show that I normally applaud: a lavish, clearly expensive, multimedia extravaganza of a major modern movement, with more than 360 works by more than 80 artists, architects, designers, photographers, and writers, borrowed from all over the civilized world.

Organized by the Guggenheim’s Vivien Greene, it includes not only paintings, drawings and sculptures, but also advertisements, architectural exhibits, ceramics, design, photography, performance, music, theater, free-form poetry and many other kinds of writing, not least manifestos up the yin-yang.

Futurism’s presiding deity or – if you prefer, chief ideologue—was the poet Filippo Tommaso Marinetti (1876-1944), who formally inaugurated the movement in 1909 by publishing (in a Parisian newspaper) “The Founding and Manifesto of Futurism.” This exhibition concludes with his death in 1944 (though the latest painting in it dates from 1939).

In this first manifesto, Marinetti declared that “art, in fact, can be nothing but violence, cruelty and injustice.” More famously, he wrote that “a speeding motorcar is more beautiful than the Winged Victory of Samothrace,” the statue in the Louvre.

He was in love with modern civilization, with all its speed and technical innovation, but also with its shortcomings, claiming that “Art, in fact, can be nothing but violence, cruelty and injustice.”

He felt that the artists who belonged to his movement should end every artistic relationship with the past: museums, libraries and every type of academy.

Together, he wrote “We will glorify war –the world’s only hygiene—militarism, patriotism, the destructive gesture of freedom-bringers, beautiful ideas worth dying for, and scorn for women.”

This is heavy stuff, I guess, and although I’d long been aware that futurism had this ungainly ballast of ideology, it didn’t really sink in until after I’d seen this show and had a chance to evaluate it. This has taken me a while.

I didn’t get a chance to take in all of this show’s beauties at the media preview, so I went back & examined it from the dome to the lobby, taking a lot of notes.

Still, somehow I couldn’t get around to writing them up, and it wasn’t only the fact that I had too much else to do. Something else, though I couldn’t have said what, was holding me back.

Then, in March, a sometime travel agent who is based in Paris passed through New York, and, as she was a friend of a friend, I invited her to coffee. She wanted to know what art was worth seeing in the Big Apple.

I mentioned “Italian Futurism” (it’s always tough recommending shows to visitors whom I don’t know, as their tastes can vary wildly from mine—so often, either they want the latest dada or they shy away from “modern art” starting with Picasso or even Matisse).

Anyway, when I didn’t hear from her, I emailed her, asking if she’d gotten to the futurism show. She replied that she had, and was glad to have seen the Frank Lloyd Wright building, but didn’t find the show itself very inspiring.

I blush to admit this is not that far from my response. To be sure, there are some splendid paintings and sculptures in it, but almost all from the so-called “heroic” period, prior to World War I. These occupy the lower part of the ramp.

The upper reaches offer what the museum’s literature calls the “later incarnation” of this style, from after World War I up until World War II. I found this latter part mostly dull going.

With this second group of painters, futurism had become a manner rather than a style. And this part of the show is also the one that relies most heavily on all the applied arts & associated futurist expressions (as opposed to its original manifestations in the fine arts of painting, drawing and sculpture).

I could care less about the futurist influence in advertisements or garments, ceramics or performance. Go ahead – call me a dork.

However, in the lower reaches of this show, there is a lot to love. True, much of it comes from MoMA, so you may well have seen it before, but it’s refreshing to see it in a new context.

A few of the large paintings in the upper part of the show will only be on viewthrough August 20. As far as I'm concerned, their removal will only mean that the viewer going down the ramp gets to the good stuff sooner.

Four of the five artists who signed Marinetti’s original manifesto with him were talented artists, and the fifth was a genius. All five are seen to good advantage here.

Despite their warlike program, the futurists were only as radical artistically as the other radicals of their generation, and initially not even that. When Marinetti was first getting organized, the artists were still painting out of the prop wash of pointillism.

Then, in the fall of 2011, Rossolo, Carra and Boccioni left Italy to visit Paris, and were led around to most and maybe all the avant-garde studios by Severini, who was already based there, and already learning from what he'd seen.

We can’t say for sure that the visitors met Picasso, but after that visit to Paris, futurist work evolved into an Italian form of cubism (though no admirer of futurism for its own sake will admit as much).

Be that as it may, this show has some equally lovely paintings showing cubo-futurism at its peak. Severini is represented by his spirited “Blue Dancer” (1912), and Carra has the vigorous “Funeral of the Anarchist Galli” (1910-11).

Boccioni is there with all three panels of his classic triptych, “States of Mind’ (1911). Although MoMA owns all three, we are lucky these Duchampian days if the museum keeps even one of them on display.

The organizers of this show know who its real hero is. The alcove at the top of the first part of the ramp is completely given over Boccioni, too, with a sequence of drawings related to its three sculptures.

All three repay scrutiny, but the biggest and most beautiful is the famous bronze striding figure known as “Unique Forms of Continuity in Space” (1913; cast 1949). With its winged legs (and other appendages), it is the essence of motion in place.