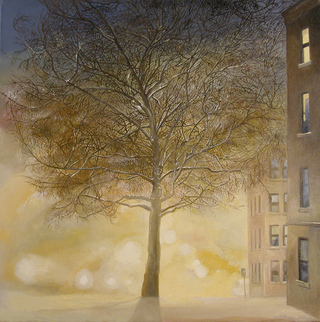 Tom Keough. Blizzard. 2013. Oil on canvas, 20 x 20 inches. Photo Courtesy Tabla Rasa.
For some time now, I’ve been citing the title of “Only the Dead Know Brooklyn,” a famous short story. It’s by the first Thomas Wolfe (1900-1938), a writer from Asheville, North Carolina who came to the Big Apple and in 1929 won fame for “Look Homeward, Angel,” a coming-of-age novel with a less than flattering portrait of his home town.

I’d always been curious about that short story, because I knew that Wolfe had lived in Brooklyn Heights. There, sometime between 1933 and 1935, he’d met my aunt-to-be, Emily Macrae, a young copywriter at Abraham & Straus, Brooklyn’s premier department store. She didn’t meet my uncle, Benjamin West, until around 1940, and she’d told me how she and Wolfe had walked across the Brooklyn Bridge together, so this time I looked up the full text of the story.

Turns out that it was first published in The New Yorker in 1935, and is as baffling as New Yorker short stories so often were (and, I suppose, still are, though I haven’t read any lately). The story is all told in Brooklynese, with dated, practically unreadable spellings of even easy words (all used to designate the lower orders, even in The New Yorker, in those days).

In the story, a stranger meets up with the narrator and some other men on a subway platform in Brooklyn. The stranger wants to know how to get to an address in another part of Brooklyn, and gets conflicting advice. He has a map with him, and has been using it to find his way all around Brooklyn, so the narrator ultimately decides he’s crazy.

The concluding sentence (substantially the same sentence that opens the story): “It’d take a guy a lifetime to know Brooklyn, t’roo and t’roo. An’ even den, yuh wouldn’t know it all.” This has been interpreted several ways, but maybe the simplest & most heavy-handed is the right one: life itself is unknowable.

I mention this because my search after art leads me to a variety of neighborhoods, and this report in particular deals with four, all in Brooklyn. The first is in the bucolic outskirts of DUMBO, where I went to Gallery Gaia to see “Paper Cuts,” a group show of five artists working in different ways with handmade paper (through June 1).

The show was organized by Fran Kornfeld, and the participating artists are Ursula Clark, Nancy Cohen, Junia Flavia d’Affonseca, Kornfeld & Sylvia Schwartz. Kornfeld, whose luminously-colored small cloudlike paper pieces are already familiar to my readers, has done a brilliant job of showing some of the many ways that handmade paper can be used. Though (or perhaps because) vivid color is lacking in all but a few pieces, the modest space of the gallery looks open, clean and inviting.

Three pieces --by Clark, Cohen and Schwartz , and all completed in 2014-- are large, ambitious, three-dimensional and so complicated that they are practically impossible to describe. I find it easiest to write about Clark’s “Regeneration,” which centers on recycled paper cast in brown, rough-textured medium-sized and smaller half-globes.

These half-globes are mounted on sheets of semi-transparent white paper with small leaves embedded in it (reminding me of Japanese rice paper). The larger half-globes also have filmy larger leaves fastened to them by fine wire.

In the category of more easily-described two-dimensional work, I find admirable pieces by d’Affonseca, Cohen and Schwartz (as well, of course, as Kornfeld). Schwartz’s three all-white, ruggedly imprinted horizontal slabs put me in mind of the chevrons on (or rather, in) handmade paper that Kenneth Noland used to make in the 80s .

D’Affonseca’s charming five small to medium-sized white panels of “Birds,” with simple little “Vs” to designate their subject matter, were too easily overlooked – hanging, as they do, in the entry foyer. Also very likeable was Cohen’s small “Solo Drawing,” with a somewhat surrealistic biomorphic image in pale blues and a few black outlines.

PROGRESSING ON TO WILLIAMSBURG

The next show I saw took me on to Williamsburg (another neighborhood familiar to me because of its art presence). The gallery was Art 101, and the show was a joint presentation of “Exile,” by Amalia Piccinini and “Off a Back Burner,” by Tim Main (both closed May 18).

The presence of Main meant it wasn’t technically a solo exhibition for Piccinini, but her five paintings (including a diptych) occupied the entire front part of the gallery, with his installation tucked away in the back, so it was possible to get the same impression of the paintings that a solo exhibition would have given.

And yes, these completely abstract paintings were memorable, though terribly hard to describe, practically impossible to provide with adequate lighting, and downright impossible to reproduce properly. Made with acrylic and oil on canvas, they were all very, very dark—mostly blackish purple, but sometimes blackish blue, and all with marginally lighter highlights of brown, reddish brown or orange.

For somebody who didn't look closely, they could be described as minimal. However, the viewer who studied them closely would still have been able to see evidence of brushwork and/or other means of paint application that reflected the presence of a human hand—cloudlike effects, to create something beautiful.

The level of expertise was equal throughout, but there were two paintings I related to most strongly. One was “Privilege,” which was 45 inches square and one of the purple ones, with faint, faint clouds of orange. The other was “Touch,” a tiny gem, only 14 x 11 inches. Both of these paintings were done this year.

“There” was the diptych, with both panels also 45 inches square, and completed in 2013-2014. It looked great, too, as nearly as I could tell, but – although the gallerist had done her damnedest to light it properly --- I still couldn’t tell exactly what colors it employed.

Sunset Park is a neighborhood in Brooklyn new to me. It’s on the R train’s way to Bay Ridge, and appears to be not yet altogether gentrified—though, by the time this review reaches its readers, Starbucks and Dunkin’ Donuts will doubtless have begun to invade.

The gallery in this neighborhood that I was visiting is Tabla Rasa. I thought this was a misspelling of the Latin term, “tabula rasa” (meaning “clean slate”), until its co-proprietor, Audrey Anastasi, explained to me that she and her husband, Joseph Anastasi, had deliberately chosen the shorter spelling because they liked its “sound and musicality.” Google has many entries under this spelling, too (if you can get this stubborn search engine to move past “tabula”). As “tabla” means “board,” “table” or “panel” in Spanish, there is, for example, a restaurant named “Tabla Rasa” in Frankfurt, Germany. “Tabla” also means a pair of bongo-like drums used in Hindustani and Indonesian music, so “Tabla Rasa” is the name of a California percussion group.

The show I’d come to see was “Intimate Forest,” co-curated by Anders Knutsson (through June 7). It’s all about trees, which was sheer delight for me, as Joyce Kilmer expressed my feelings perfectly when he wrote “I think that I shall never see/A poem lovely as a tree.” I love looking at trees. On my daily perambulations, I will detour into some parks for the sheer pleasure of looking at their trees. At this time of year, my enthusiasm peaks, as trees are outrageously beautiful against the blue sky: their leaves are just coming out and still chartreuse, as opposed to forest green. Chartreuse and blue are for me the colors of spring.

“Intimate Forest” incorporates a range of styles and media. Styles go all the way from almost total abstraction to very literal. Among the media employed are painting, drawing, sculpture, graphics, photography and some techniques that defy categories. Being a traditionalist, I mostly went for rectangular examples of two-dimensional painting, drawing and photography (though I also liked the carved wood sculpture of Eric Pesso).

The show is hung with the bigger works in the larger front gallery. Smaller ones are in the smaller back gallery, and the hallway in between the two. In the back gallery, the photographs by Peter White stood out, most notably “Light,” a group of trees surrounded by a field, and “Hannersdorf,” one large tree. “Glade,” an oil on panel by Thomas Hagen, has some exquisitely semi-abstract brushwork in the foreground, and a color scheme that reminded me of Corot.

In the front gallery, I responded most to two-dimensional work by three artists. Anders Knuttson has the largest number of pictures here: five large and very dramatic drawings and paintings of tall, single & invariably twisted tree stumps or leafless small trees. Their draftsmanship is impeccable, while their color is extremely restrained--either in sepia tones or black and white (with only occasional touches of green). “Caucasian Wingnut,” which has a curiously almost human presence, is a single contorted tree, laid out on a horizontal canvas.

Audrey Anastasi is represented by two paintings, both of clusters of the narrow trunks of white paper birch. One has a human hand at the top of one trunk, and some birds flitting around. I preferred the other, “Golden Forest,” which eschews whimsy to focus on the magic of the trees themselves, and takes its name from the handsome boundary around the edges of gold leaf paint.

As a group, I was most impressed by the three acrylics of Scott Bennett—not least because I love color, and these were the most colorful canvases in the show. Also, I responded to the thick, luscious paint, lavishly applied, and the almost voluptuous shapes of the three different tree trunks—each canvas has one tree trunk as its centerpiece (sometimes with hints of other trees in the background as well). All three of these paintings are very good, but “Lightness of Being” has the subtlest, most closely valued color scheme, avoiding the poison green in the backgrounds of the other two.

In the hallway hangs a single oil on canvas by Tom Keough that in some ways may be the best in show. It’s entitled “Blizzard,” and isn’t very large, but its delicacy and radiant white-and-golden-yellow color scheme makes it exceptional. The subject is a single tree in an urban setting: to the right are multi-storied brick apartment houses. It’s snowing—the ground is covered with white stuff, and through the yellowish haze of falling snow, the white glow of automobile headlights shines. The best thing about this picture, though, is the top of the tree, with its many bare branches and twigs arching out into a magnificent fan.

Only in retrospect do I realize why I found this so exceptional: because the other standout paintings in the front gallery are almost all about tree trunks, and a trunk is only part of a tree. Bennett's topless trunks in particular reminded me of the figure paintings of headless female nudes by Horacio Torres, and I've always been uncomfortable with those--they reduce the women who posed for them to pieces of meat.

FINALLY, ON TO BUSHWICK

Just received, as I write this, is an announcement of the "Bushwick Open: Twenty-Three Artists From In and Around," which will take place at 386 Jefferson Street, Brooklyn, in the garage between Irving & Wyckoff avenues. The show will only be up Saturday, May 31, and Sunday, June 1, from noon to 9 pm, but there is also an opening reception on Friday, May 30, from 6 to 10 pm. I'm not sure I'll be able to get there, as I'm supposed to visit a friend in Connecticut that weekend, but I post the notice in hopes that others will make it, as this will be one of those rare opportunities to see work by Paula DeLuccia, whom I consider very talented; also advertised among the participants is Sideshow's Richard Timperio.
Be the first to comment