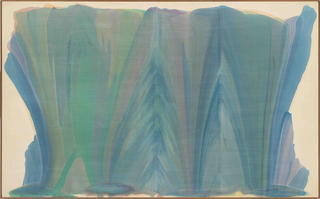 Peter Schjeldahl, in the New Yorker, was foaming at the mouth at all the attention they have been getting (the New York Observer, in its new weekend supplement, handled both shows much better). But Schjeldahl is equally important as his way of putting them down is probably all too common but rarely exposed in all its negativity.

His way of putting them down is to argue that the popularity of Helen Frankenthaler and Morris Louis is all a matter of money: with the prices of dada-oriented contemporary art and abstract expressionism from the 40s and 50s rising into the stratosphere, dealers and “collectors” (who these days are more likely to be speculators than in days gone by) are looking for “bargains.”

They see color-field paintings as what a stockbroker might call “undervalued,” meaning that they may hold more “upside potential.” It is obviously impossible for Schjeldahl to appreciate the visual appeal of these paintings: all he can see is their possible monetary value.

The rather sizeable number of people who are coming to see these shows will – one hopes – be more responsive to their esthetic (as opposed to purely monetary) quality. The crowd was largest at “Helen Frankenthaler: Composing with Color, Paintings 1962-63,” staged at the Madison Avenue Gagosian (through October 18).

This exhibition, the second that Gagosian has staged since it became associated with the Frankenthaler estate, was curated by John Elderfield, Frankenthaler’s longtime chronicler, but the catalogue essay has been written by Elizabeth Smith, executive director of the newly-formed Helen Frankenthaler Foundation, and before that an executive at the Art Gallery of Ontario (Maureen St. Onge, who was Frankenthaler’s right-hand woman for 38 years before the artist’s death, and probably knows more about her work than any other living human, is the Foundation’s secretary).

The first Gagosian show, “Painted on 21st Street: Helen Frankenthaler from 1950 to 1959,” mounted in 2013, was truly magnificent, and widely recognized as such. This show doesn’t measure up to it, although it has some powerful paintings. The difference has not so much to do with size, although with only 11 paintings in it, this show is much smaller.

Nor does the difference entirely depend on the different time frame. Although it is arguable that Frankenthaler was at her peak in the 1950s, she made many splendid paintings in the 1960s, too (Time’s 1969 article on her reproduced 5 dazzling Frankenthalers in color, all from the 60s).

It should be a source of comfort to younger artists that Frankenthaler could attain such a level of fame with such a small body of work actually sold—although I wouldn’t exclude the possibility that many other smaller paintings, not considered worthy of reproduction by Rose or Elderfield—did find their way into private collections.

ANYWAY, the current show at Gagosian has a number of seductively lovely paintings in it, including “Cool Summer” (1962), “Sun Shapes” (1963), and “Mountain Pool” (1963). In all of these, free splats and blobs coalesce to create memorable images, intermingling rounded and spiky shapes into a wonderful organic mix.

Of the remainder, several appear to be experiments that Frankenthaler made in what I’d be inclined to call “frottage,” with the marks of the floorboards on which she was working clearly indicated in the paint on the canvas. According to a quote from her, she worked on these canvases from both sides, starting with paint that had stained through the canvas, and then finishing them off with paint on the other side.

In theory, this is interesting; visually, it didn’t work that well for me--except with “Filter” (1963), which irritated me initially but stayed in my memory for the delicacy of its pale colors.

Another painting I really liked is “Hommage à M. L.” (1962). This one, like “Cool Summer” is full of blips separated by space but united into lively, dancing compositions by the canny placement of the blips, and by the surrounding halos of turpentine that have soaked into the surrounding canvas (both of these paintings are still oils, though some of the paintings in this show employ acrylics).

This is the second time I have seen this delectable painting. The first was in 1983, when Kasmin (John, the father, not Paul, the son) had a beautiful show of 60s Frankenthalers -- what he affectionately called his “popsies” -- at his gallery in London.

Frankenthaler was in London, too, for the opening, and so was José Luis de Castillejo, a Spanish diplomat and collector. This was shortly after I’d published my three articles in Arts Magazine on art criticism & art history in New York: the 1940s vs. the 1980s, and the artist had trucked all three articles clear across the Atlantic so that de Castillejo could read them

Ms. Smith, in her catalogue essay, is aware that the “M.L.” in this title refers to Marie Laurencin, not Morris Louis, but she follows Elderfield in assuming that Frankenthaler was in some way paying tribute to Laurencin’s painting. I don’t think so. Laurencin was not a very gifted painter -- but she was the ladyfriend of Guillaume Apollinaire, the cubist poet who is important for his role as early & passionate advocate for Picasso.

Apollinaire wrote about Laurencin, too, praising her to the skies, but nobody paid any attention to this because they were lovers. I think that with this title, Frankenthaler was saying something about her relationship to Clement Greenberg, a former lover of hers who NEVER wrote about her (except in a reportorial capacity, to report – briefly – that Louis and Noland had been very impressed by “Mountains and Sea”).

I think that with this painting’s title, Frankenthaler was seeing herself as a latter-day Laurencin, and Greenberg as a latter-day – but wiser – Apollinaire. She was saying (if perhaps in a rather irritated tone of voice), “Okay, Clem, I understand.”

Even though it’s a better show, I shall have less to say about “Morris Louis: Veils” at Mnuchin on East 78th Street, only three blocks away from the Madison Avenue Gagosian (and also up through October 18).

That, I think, is primarily because Louis was already dead before I arrived in the Art section of Time, and because my initial exposure to him didn’t endear him to me. It took place at a distance in 1967, during my first year on the job, before I’d begun to warm up to abstraction per se.

My senior editor, Cranston Jones, insisted that we do a story with a page of color photography on Louis’s first retrospective, at the Museum of Fine Arts, Boston. I had to write it the week after I’d been forced to write nicely about the Jackson Pollock retrospective at MoMA, which I hadn’t much liked either.

To me at that stage of the game, abstract expressionism was still the dead hand of the Establishment, against which my heroes, the pop artists, were so gallantly rebelling. Louis, who had been born in 1912, the same year as Pollock, struck me as just another abstract expressionist, so I had no urge to fly up to Boston & see the show for myself.

Over the years since, though, I’ve seen many more paintings by Morris Louis, and learned to appreciate what a magician he was with those radiant and mystifyingly ambiguous washes of paint. How he made the “Veils,” nobody knows, beyond the fact that he created them by pouring paint on canvas and tilting the canvas this way and that—all in the 12-by-14 foot dining room of his Washington DC home that he used as a studio.

Although officially he began making these veils in 1954, he destroyed most of his output from the 1954-57 period, and those which survive don’t look like the Veils for which he became known. All of the works in this show date from 1958 to 1960.

They were his first truly mature works, not created until he was in his later 40s; after them, he evolved into and out of the “Florals,” the “Unfurleds,” and finally the “Stripes,” all before he died of lung cancer at the tragically early age of 49 in 1962.

It has been said that the lung cancer was due to fumes from Magna, an acrylic resin that he used for the final decades of his life, and that had been developed by his friend, the paint manufacturer Leonard Bocour, but I believe that I’ve also seen photos of Louis smoking, so there have been more than one reason for his sad demise.

To Greenberg, these paintings were non-referential, melding the paint into the canvas surface until all possible references to external reality were lost, and the result was purely “optical” art. This is also the pomonian line, as expressed by Kirk Varnedoe and quoted by Karen Wilkin, in her catalogue essay for this exhibition—which in other respects gives full credit to Greenberg for discovering this marvelous painter (Greenberg's name is quoted at least ten times in this ten-page essay).

I will admit that the language Wilkin uses throughout most of her essay eloquently calls upon the reader to respond to the purely optical loveliness of these many-splendored canvases. She uses some rather dull analogies with the external world (massed flowers & sunsets) cited by Arthur Danto to show how vulgar it is to try and find such analogies, but you know, I don’t think that Greenberg himself ever said that my theory of multireferential imagery, unconsciously arrived at, was wrong.

All he indicated was that it was irrelevant, beside the point – and so it may be, for those observers who can respond to abstraction without flinching. Evidently, though, even Wilkin herself isn't quite in this category, as in her concluding remarks, she uses language very conducive to seeing the "Veils" purely as waterfalls.

This, as I have remarked in connection with Elderfield's attempts to tie Frankenthaler's painting down to specific references to Old Master paintings, downgrades the paintings from great abstractions down to second-rate representational ones, delineating their images so clumsily that it takes a curator or scholar to decipher them.

My argument is that such abstraction differs from representational painting in being ambiguous--conveying not just one image, but a whole congeries of them. At this point, though, I will restrain myself from pointing out all the allusions that these paintings are so abundantly endowed with, and limit myself to evaluating them as paintings.

There are no absolute losers at all in this show—throughout, it maintains a very high standard.

Better than all the rest of them – even if the Whitney does own it—is “Tet” (1958). This is a luscious visual symphony of aqua tonalities with undercurrents of gray, blue and gold—to say nothing of a compositional complexity that cries out for interpretation.

In my print edition, where the readership is more likely purist, I refrained from such interpretation, but here on the web I like to think that at least some readers will be more sympathetic to my theory of multireferential imagery than Greenberg ever was.

In my case, what often comes across is a myriad of images, mostly natural but some man-made. With "Tet," I am reminded not only of a veil, but also clouds, trees, a waterfall, Gothic arches, rock crystals, huge feathers, and the entrances to mysterious caverns that lead on to yet other visual frissons....
Be the first to comment