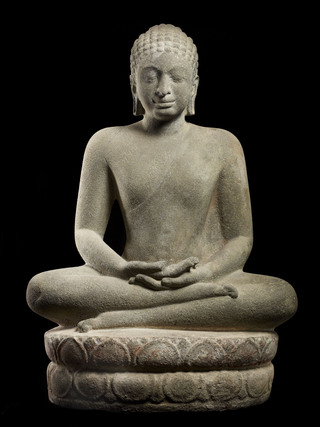 Buddha in Meditation. Southern Thailand, late 6th–mid- 7th century. First recorded at Wat Phra Boromahathat temple, Chaiya District, Surat Thani province, Thailand. Transferred to Chaiya National Museum. Year unknown. Sandstone 41 5/16 × 23 1/4 × 14 15/16 in. (105 × 59 × 38 cm) Lent by Musée National des Arts Asiatiques–Guimet, Paris (MG18891)
Three current sculpture shows have attracted my attention this summer: one at the Met, one at the Frick, and one at Freedman Art. By coincidence, they’re all on the Upper East Side, so I was able to take them in during one long day. Dealing with them in reverse chronological order, I shall offer the most recent first, the next most recent second, and the most ancient, third.

The first, then, is “Carved, Cast, Crushed, Constructed,” at Freedman Art (through August 22). The aim here is to show the many different ways that sculpture can be created. To this end, the gallery displays small works by 15 different artists, ranging in time from a marble “Sewing Machine” (1943) by David Smith to “k161b” (2011) a mixed-media construction by Frank Stella—not to mention the business end of a late Neolithic Celtic hunting or fishing tool made of jadeite and one of the highlights of the show.

This exhibition has clearly been targeted toward a broader audience than I am, so it includes a number of widely-admired artists whose handiwork, while often very ingenious & uniformly workmanlike, failed to send me up the wall with delight. Among these artists are Lee Bontecou, Alexander Calder, John Chamberlain, Nancy Graves, Mark di Suvero, & Richard Stankiewicz.

I did, on the other hand, mostly relate to the work by Joseph Cornell, Jules Olitski, Willard Boepple, Anthony Caro, David Smith, & Herbert Ferber (the Stella is also a lot better than other Stellas I’ve seen).

I went most strongly for Cornell’s “Untitled (sun box)” (1958), Olitski’s “Metal Plopper” (1987-91), Boepple’s “For Rhum #2 (1990-2012) and especially Smith’s “Spectre” (1953). The Smith is truly delightful, a lively, lilting, delicately-leaping little steel-and-bronze figure. Displayed as it is next to a cutesy Stankiewicz bird, it aptly demonstrates the difference between talent & genius.

Ever since I received the press release from The Frick Collection announcing “Enlightenment and Beauty: Sculptures by Houdon and Clodion” I had been looking forward to this show. Both Claude Michel, called Clodion (1738-1814) and Jean-Antoine Houdon (1741-1828) had been favorites of mine for a long time, though I’d never seen much of their work.

Moreover, with one visit to the Frick, I was fated not to see much more, for this show, in the recently-opened, modestly-sized “portico” area of the museum, contained only six, mostly smaller sculptures by each artist at the time I saw it. Still, the exhibition will be on view until April 5, 2015, and the works on view will rotate. (In fact, they have already started their rotation, so the works I saw may not be the ones you see when you go there.)

The Frick, in its literature, prefers to point to the similarities between the two sculptors—the fact that both studied at the Royal Academy in Paris, and both won its Prix de Rome, so they could go on to study at the French Academy in Rome. Further similarities are said to be their combination of influences—both taking their initial inspiration from the classical sculpture of ancient Rome, but combining it with the naturalism so much admired by their own contemporaries.

The present exhibition includes five terracotta works by Clodion, and one in marble. It gives a fair impression of his work, the two small reliefs entitled “The Cupid Seller” (ca. 1765-70) being especially appealing. They depict a vendor offering to sell a winged cupid (symbolizing love) to a young woman buyer, everybody being in classical dress and the whole subject based upon an ancient Roman original.

There is also an energetic rendition of a he- and a she-god dancing together, “Zephyrus and Flora” (1799), but it’s very detailed and small. I would have liked to see one of Clodion’s larger terracotta sculptures of a body or even just a head of a single child-god.

Houdon, by contrast, was best known for his marble portrait busts, and there are five works in marble by him in this show (plus one in terracotta). Though he portrayed many ladies, he is particularly famous for his crisp, sardonic studies of men---especially those philosophes – 18th century intellectuals like Voltaire and Rousseau – who were ruthlessly employing the fresh light of reason to undermine the ancien régime.

Still nearer to Houdon at his best are those great naturalistic portrait busts from ancient Rome’s Republican period. They must have inspired his youthful admiration, and it is in this spirit that Houdon’s numerous versions of his marvelous bust of Voltaire are executed. Again, it’s too bad that none of them were on display in this show when I saw it.

When Houdon was called upon to portray figures in the social & political Establishment of his day, he adopted the later, more flattering style of Imperial Rome. Such, at least, appears to be the case in the sole portrait of a man in this exhibition, Armand-Thomas Hue, Marquis of Miromesnil, Louis XVI’s minister of justice (1777). It’s very well done, especially the voluminous official costume, but except for some slight tension around the mouth and eyes, nothing here suggests any particular personality. It's too respectful.

Much the same applied to the two busts of ladies by Houdon that I saw, “Madame His” (1775) and the “Comtesse du Cayla” (1777). While they did everything possible to highlight the charms of these high-born ladies, neither is distinguished for much beyond elegance and aplomb.

Then again, I’m sure I’m asking too much from what it is after all only a modest little exhibition, comprised exclusively of the Frick’s holdings, plus some loans from private collections. It’s not meant to be the definitive retrospective for either artist, just a sampling of their talents—and as such, it succeeds very well.

“Stunning” is not a word I often apply to exhibitions, not even those at The Metropolitan Museum of Art. Though I heard other people using it in connection with the Met’s show of “Silla: Korea’s Golden Kingdom” last winter, to me that show was more about precious metals than art. I won’t say it lacked “soul” altogether but the work in it was crudely done, and as such, of greater archaeological than esthetic interest--especially by comparison with the show of often similar art that I am now about to discuss.

This show, which is now at the Met (through July 27), is one that I am happy to call “stunning.” I would also call it a knockout, a “once in a lifetime” occasion and DO NOT MISS. It’s called “Lost Kingdoms: Hindu-Buddhist Sculpture of Early Southeast Asia, 5th to 8th Century,” and was organized by John Guy, the curator of the art of south and Southeast Asia in the Met’s department of Asian art.

This has clearly been a Herculean task, for it’s a huge show, with some 160 sculptures in it. Many are large-scale works of stone, bronze and terracotta, and many are loans from the governments of Cambodia, Vietnam, Thailand, Malaysia, and Myanmar (to say nothing of loans from museums and private collections in France, the U.K., and the U.S.).

Even more importantly, most of the pieces in this show are of outstanding quality, just one masterpiece after another, and beautifully installed.

The story here is that Buddhist Hinduism made its way from India and Sri Lanka between the 5th and the 8th centuries to those ancient kingdoms in Southeast Asia that no longer exist, but that laid foundations for today's countries in the region.

Pyu, for example, was in central Myanmar, Funan in southern Vietnam, Zhenla in Cambodia, Champa in central Vietnam, Dvaravati in Thailand, Kedah in Malaysia, and Srivijaya in Sumatra.

Of them all, the only one I’d heard of before was Champa, and that because a family friend had done translations from the French of scholarly articles about Cham sculpture. From her, I knew that there was a museum full of it in Da Nang, a city better known for the fighting it witnessed during what Americans call “Vietnam” and the Vietnamese call “the American war.”

If you read the history books, you will find that Southeast Asia was as prone to internecine wars in ancient times as it was in the 19th and 20th centuries, but no hint of conflict intrudes upon the exhibition at the Met. Rather, a spirit of tranquility suffuses the galleries, as we are led by easy stages through the art history of this period as it unfurls in the guise of objects made for contemplation and worship.

I’m not much for organized religion in America just now, at least not those varieties of it whose professions of “Christianity” are belied by the selfishness of their practice of it, but there’s no doubt that way back then, organized religion was capable of inspiring majestic and moving imagery, and in the East as well as in the West.

The opening galleries of “Lost Kingdoms” introduce the area, and show how it learned of the religions of Hinduism and Buddhism and their representation in art from traders and itinerant Brahman priests.

We next see art created by and for the animistic spirits & nature worship that preceded the introduction of Buddhist Hinduism in Southeast Asia. This is also fine, but nothing to compare with the splendor of the galleries that follow.

First we arrive at a double gallery devoted to Buddhism, then to another big one offering Hindu gods and goddesses. Toward the end, we progress to various forms of state religion (in which local monarchs became identified with deities), and finally to a multitude of “avatar” representations.

This is very much a “subject” exhibition, as opposed to one offering a critique of “style,” in that no attempt is made to separate out works from distinct cultures. Rather, each gallery pulls together examples of the same subject done in different countries and displays them all together.

Nevertheless, the workmanship of everything is of such a high caliber that anybody who knows how to love beauty in the abstract will have a wonderful time at this show.

Out of so many splendid images, I am a loss to single out any which are better than any others. As but one of many examples of its visual excellence, I offer a 3½ - foot tall, sandstone “Buddha in Meditation” from central Thailand, made between the late 6th and mid-7th centuries. Though its pose in the lotus position is familiar, the sinuous eloquence with which it expresses its contemplative mood is forever fresh.