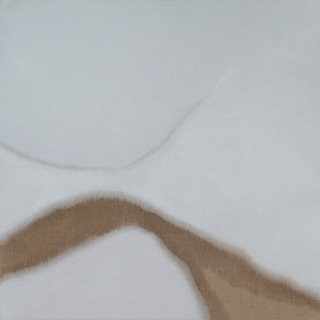 Both artists are recent graduates (if that’s the word I want) of Spanierman Modern. They have chosen to move to the Chelsea gallery opened just last year by two (likewise) Spanierman grads, Christine Berry and Martha Campbell.

Of the two artists on view at Berry Campbell, Susan Vecsey may be more familiar to the art world at the moment, having been included in Spanierman group shows since 2009, and having had a solo exhibition there in 2010.

She is also the younger of the two artists in the show, having been born in 1971, and taking her BA at Barnard College, my own alma mater. Although Barnard offers many more studio art courses now than it did in my day, its offerings in art history are considerably more extensive.

Barnard after all is a liberal arts college, not an art school, so students wishing to major in visual arts are expected to take at least as many art history courses as studio courses. After Barnard, Vecsey seems to have worked at an office job away from the art world for some years, meanwhile pursuing further instruction in art-making at the New York Studio School, the New School and elsewhere.

Today, she divides her time between New York City and East Hampton; her first solo exhibition took place at Ashawagh Hall in East Hampton in 2008.

As is perhaps to be expected from an artist so well versed in art history, Vecsey has developed a style that melds three kinds of painting popular since the 60s: minimalism, color-field, and what has been called “lyrical abstraction.” This last, as most notably practiced by Ronnie Landfield, situates abstraction in a landscape context (or perhaps situates landscape painting in an abstract context).

This doesn’t mean that Vecsey’s paintings look anything like Landfield’s- - just that the underlying ideology appears to be similar.

At any rate, in the 8, mostly larger Vecseys that I saw at Berry Campbell, very thin paint in warm, quiet colors has been carefully applied to create large, simple, entirely flat, softly delineated forms.

More often than not, these forms suggest hills, fields, horizon lines, seas and skies. But they only suggest such allusions. They don’t insist upon them, and the artist frequently incorporates straight-sided shapes, like squares or rectangles, into her compositions—these being more suggestive of human manufacture than natural form.

Still, upon occasion Vecsey gets away almost entirely from these abstract landscapes and creates pictures that (for me, more excitingly) approach pure abstraction.

Among these, the best is “Untitled (Cool White)” (2014). Upon a simple pale gray field, a declining silvery gray loop is nearly (but only nearly) met by an uprising track of cinnamon brown below.

Although this reduction of shapes and colors to such a minimum might suggest “minimalism” to some viewers, the fluidity and gentleness of the painting have little if anything to do with the more doctrinaire (and more sarcastic) forms of minimalism.

On the whole, Vecsey’s contribution to this show is distinguished by its calmness, pleasantness and serenity – admirable qualities all.