THREE MORE ON THE UES 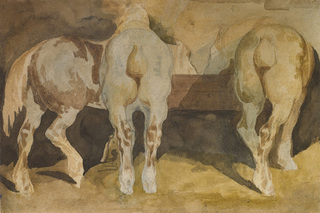 Théodore Géricault. Three Stabled Horses Feeding, ca. 1822-23. Watercolor over graphite, 8 3/8 x 14 1/4 inches. Courtesy Jill Newhouse Gallery.
Another promenade on the Upper East Side yields me two more shows moderately worthy of a visit, and one real do-not-miss. The first two are at Acquavella and The Met, the third at Jill Newhouse, at 4 East 81st Street conveniently located just between the other two.

At Acquavella , the show is “Dubuffet/Barceló” (through September 19). Jean Dubuffet (1901-1985) is, of course, well known as perhaps the leader of l’art informel or tachisme in postwar Paris of the 1940s and 1950s (a whole moment that New York is currently “rediscovering” – the season just past has seen other shows of artists in these allied movements, including Nicolas de Staël, Jean Fautrier & Pierre Soulages).

Miquel Barceló (b. 1957) , a native of Majorca, seems to be better known in Europe than he is in this country. He represented Spain at the Venice Biennale in 2009, and has also shown at the Louvre in Paris and the Kassel Documenta in Germany, but the real reason he is paired with Dubuffet is that in his youth, he was inspired by him, or so he says.

The show is divided into two parts, with “portraits” in the front gallery, and “landscapes” in the back one.

In the front gallery, I was interested to see a number of Dubuffet’s grotesque heads, executed in his classic manner of art brut (savage or outsider art); the best are “L’homme au nez Camus” (1950) and “Tête de héros” (1950). I couldn’t work up any enthusiasm for Barceló’s frequently bathetic heads.

The Spanish painter did better in the “landscape” category, this being really more a display of abstracts. The Dubuffets here were interesting, though none were up to the standards of those abstract Dubuffets that I saw last summer at the Parrish Art Museum in Southampton, in that joint show of the French artist, Pollock & Alfonso Ossorio (I posted a review of this show on August 18).

The best abstract Dubuffets at Acquavella are three all-over, totally granular ones from the later ‘50s: “Chaussée grise” (1957); “Texturologie V: (Charbonneuse)” (1957); and “Texturologie X (Marbreuse rougeâtre)” (1958). I thought they were provocative, but that was just it: they were trying provoke instead of inspire, a little bit anyway—and that put them on the route toward the coy, sticky red-white-and-blue Dubuffets from the sarcastic ‘60s.

The Barcelós in the “landscape” gallery are actually quite attractive, if also a bit on the provocative side. Most of them are white on white, broad simple sweeps of paint, evidently with some other thickener in them, to create slightly raised surfaces (the checklist says they are made with white titanium pigments and polyvinyl acetate on linen). Very cool & fresh, I thought. The best are named “Plaza Mayor” (2012); “Barrage” (2013); and “Implosion-Explosion” (2013)

Needless to say, The Metropolitan Museum of Art always has a generous helping of different special exhibitions going on. In addition to the unforgettable “Lost Kingdoms” (reviewed last week) they have a photography show of Garry Winogrand, but I was happiest sashaying through all those large, delightfully cool galleries until I got to the very back of the Robert Lehman Wing.

The show in one smallish gallery there is “The Pre-Raphaelite Legacy,” organized by Constance McPhee, a curator at the Met, and Alison Hokanson, a research associate there (through October 26)

This small but luscious show has “legacy” in its title because this isn’t about the original Pre-Raphaelite vision, but rather its second incarnation. The original Pre-Raphaelites—among them Ford Maddox Brown, William Holman Hunt, John Everett Millais & Dante Gabriel Rossetti ¬¬– joined together in a “Brotherhood” in 1848, and disbanded about a decade later.

In that brief period, they had made quite an impression with their style, deliberately eschewing the sfumato and chiaroscuro that had come in during the 16th century in the Renaissance, and going back to the clear hard outlines and daylight scenarios of the Quattrocento.

The Brotherhood also dedicated themselves to those robust religious and literary themes that best exemplified its style. And it was the subject matter, especially in its more poetic and fanciful aspects, rather than the style, that carried over into the second generation.

In this show, it is seen in the later paintings of Rossetti and the work and/or influence of two younger creative spirits, Edward Burne-Jones & William Morris.

This show is a modest one: in all, only 26 items. Twenty-five are from the Met’s permanent collection, and there is one loan from a private collection. Nevertheless, a considerable range of media is on view: not only paintings & drawings but also furniture, ceramics, textiles, stained glass and book illustrations.

Most of the paintings and drawings are by Rossetti and Burne-Jones. Morris – directly and indirectly – is responsible for almost all of the rest of the work, through the design company he led, Morris & Co., which commissioned all manner of furniture, textiles and so forth.

In fact, he’s better known as the leader of the Arts and Crafts Movement, which sought to correct the ugliness and banality of mass-produced goods brought forth by the Industrial Revolution, and to go back to the more laborious but simpler and more beautiful handiwork of the pre-industrial periods.

In the radicalism of its ambitions it can be seen as a harbinger of reform, and even modernism (loosely defined). The same can be said of the original Pre-Raphaelites, too, but Morris was also an advanced thinker in political terms: active as a socialist.

Admittedly, to the eyes of a 21st century observer, most of the work in this show looks irretrievably Victorian, and overly-detailed (dare I say, even fussy?) But that’s not to say it isn’t also a panoply of many shapes and colors, generously stocked with telling images of passionate maidens with improbable coiffures, and statuesque angels.

And that’s not even counting the elaborate but still beguiling designs on everything, from flocks of airy little birds on a wool tapestry to the sweet little image of King David as a poet (who supposedly wrote all the Psalms) in stained glass.

FINALLY, THE STANDOUT, AT JILL NEWHOUSE

As my constant readers know, I don’t often agree with the gallery selections of the NY Times, but when I read its review of this show by Karen Rosenberg in the June 27 issue, I said to myself, that’s a show I must see. Nor did it disappoint. It is a gem.

Its formal title is “Théodore Géricault from Private Collections: An exhibition and sale of drawings, watercolors and small oils" at Jill Newhouse (through July 31).

This is a small show, in two senses. First, there are only 26 works in it, and second, they are all small works. While the poignant little oil entitled "The Abandoned Cart"' (ca.1822-23) looks as though it were meant to be a finished picture, I'm not so sure about the hilarious "Two Ladies Leaning on a Wall" (ca. 1814-15).

These ladies, created from black chalk and brown and white gouache, could be a study for a larger picture, but they already have the breath of life in them, especially the one lady turning her head to glare peevishly at the viewer.

The real joy of this show is all the horses--especially for me, who was a horse nut as a child, but for anybody who can appreciate the love that Géricault obviously had for them -- in an era when they were so common that their drivers sometimes beat them to death.

The show has obviously-finished studies of horses, and some that look like they were only meant to be studies for larger and more formal portraits, but all are imbued with life and fire.

Every kind of horse is dealt with, including the famous Barberi horses who were trained to run an annual race in Rome, completely on their own -- no jockeys.

A number of pictures depict riding horses, with and without riders. You can tell they're riding horses because they're graceful and relatively light--the kind of horse you can still see around today (on TV anyway).

But by a slight majority, the larger number are draft horses, those big and powerful beasts bred to draw heavy loads. These are nearly extinct, except maybe for the Clydesdales that still pull the Budweiser beer wagon for promotional purposes.

The artist's touch here is so light, yet so clear, and the strength but also the gentleness of these heavily muscled beasts shines through. Anybody who has ever been around a stable knows not to walk too close behind a horse (the nervous ones kick). But the artist wasn't too close--just the right distance so the animals didn't feel threatened.

"A horse's behind" (in English, anyway) is an inelegant phrase to designate somebody the speaker doesn't like, but again with this image, Géricault has redeemed a comic subject with dignity and generosity.
Be the first to comment